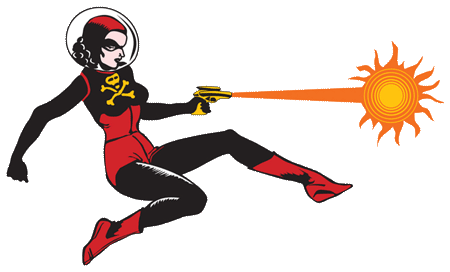 A few days ago on File 770, Chris M. Barkley wrote a guest piece called “Barkley — So Glad You (Didn’t) Ask: A Column of Unsolicited Opinions #44”. In it, he presented his wrap up of the whole award name/honors messiness involving mystery writer Linda Fairstein, John W. Campbell, Jr., James Tiptree, Jr/Alice Sheldon, and yes, even the “sainted” Hugo Gernsback (the Hugos will be named after him forever, regardless of his reputation in life…go figure).

You can click the link I provided above to read Barkley’s well considered commentary, but toward the end of his lengthy missive, he said:

All these pundits have to do is come up with a name to replace “Hugo Award”. Something that has a consensus of fandom behind it. A name that can be protected legally by the World Science Fiction Society. And…

A name that will have to endure at the very least, four or five years of committee studies and formal Business Meeting debates, amendments, substitutions and serpentine votes.

To those who wish to embark on this fool’s errand, I wish you all the luck on this Earth and all of its known (and unknown) alternate versions as well.

In any event, fame and legacies are all fleeting and a fool’s deepest desire. All that really matters in life in the long run are your family, friends, memories and knowing that you tried to do the right thing and the best you can under the circumstances.

Then yesterday, on the same “fanzine,” I read Tiptree Name Will Be Removed from Award. 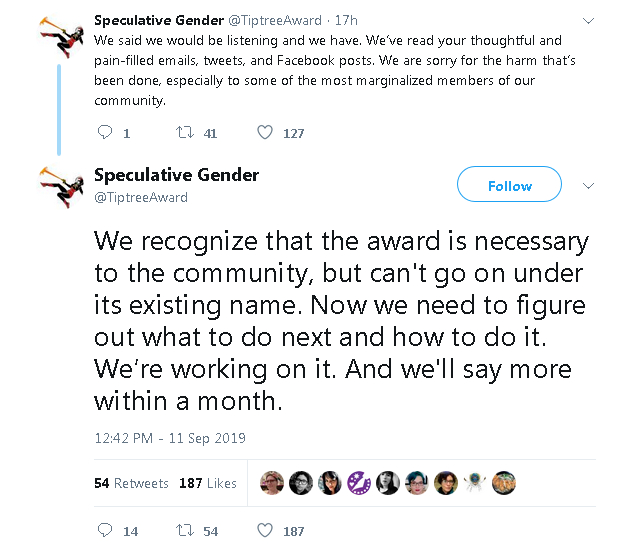 Responses at File 770 were mixed, such as:

I do think this is the right decision. I may say that my feelings on this were turned around completely by the thoughtful opinions expressed here. Thank you.

I seriously doubt anyone’s going to say “They knuckled under to social and political pressure. This is a bunch of bullsh*t.”

For the background, see my blog post James Tiptree, Jr Award to Retain its Name. It’s a tragic story, and one we see in the news from time to time. Usually, we view it in the context of compassion and “I wish they would have asked for help.”

It’s one thing to remove someone’s name from an award because they are or were guilty of heinous crimes, even crimes against social justice. It’s another thing entirely to do so because, out of desperation, someone committed a desperate act.

But as one of the people above said, it’s their award. They can do what they please with it. I suppose “Speculative Gender” feels they are trying to do the right thing.

It just gets a little tedious when every time you turn around, someone is saying “I’m offended” and that’s all it takes to get everyone else to bow to their offense. No, I’m not advocating for going out of your way to offend or upset others, but if you expect all of your “heroes” to be perfect in your own highly individualistic and specific values and perspectives, then you will have no heroes. You will only have people around you kissing your arse and telling you what you want to hear just so you won’t notice they’re flawed human beings.