I’ve been thinking a lot about villains lately. Actually, this particular File 770 “Pixel Scroll” first brought the topic up in my mind. If you scroll down to item #4 “AUTUMN LEAVES” and to “Watchmen” just below that, you can read:

Oct. 20, 9 p.m., HBO
Confession: I know nothing about Watchmen. Never read the comic or saw the (polarizing) 2009 film. I had to pause many times while watching the pilot so I could look up characters and backstories on Wikipedia. With that said, I can’t wait to see more. Set 30 years after the comics, Watchmen takes place in a world where police hide their identities due to terrorist attacks and a long-dormant white supremacist group wants to start a race war. The show is expensive-looking but not hollow. There’s a humanity to the characters that is often lacking in comic book adaptations, due in large part to the exceptional cast, including Regina King, Jeremy Irons, and Don Johnson. Hardcore fans will have to make up their own minds, but this novice is intrigued. [emph. mine]

I know I wrote a blog post sometime ago about adult-oriented comic books and how they are now themed to emphasize social justice, but I can’t find it again. I do remember that, thanks to Donald Trump, most, if not all of the villains are straight white men, and specifically alt-right white supremacists.

No, I’m not defending racism, white supremacy, bigotry, or anything like that. My wife and children are Jewish, so I specifically take a dim view of antisemitism as well as other forms of prejudice and bigotry. Yes, some of my political views are unpopular to certain demographics but I don’t advocate for hate.

That said, for many, including a few of the readers of the aforementioned Mike Glyer “fanzine,” I’m lumped together with the KKK, white supremacists, alt-right, and other hate groups just become most of my opinions are to the right of center, plus pro-Israel.

So it’s interesting to me that white people are now the latest popular bad guys in fiction. No, not all white people, only the ones we label as “other.” The “other” is always okay to hate. Trust me, the Jewish people have been “the other” for a long, long time. Having a Jewish family, I’ve seen that first hand.

I tried to look up bad guys as related to race in films, but only came up with What Hollywood movies do to perpetuate racial stereotypes. It’s a lengthy piece, but does point out racist stereotypes of Asians, African-Americans, and Latinos. Interestingly enough, it includes stereotypes of Germans as Nazis, the British, and Russians, so go figure.

I found another, much shorter article on racism in horror films so there is that as well (yes, traditionally black characters almost always die first).

I read Movie villains: The 50 best bad guys (and gals) of all time expecting to find a lot of racial stereotyping, but most characters on the list are white (well, the Wicked Witch of the West is green). Not sure what to make of 40 of the Best Villains in Literature.

I’ve been trying to mine my memory for favorite fictional villains from childhood. In comic books, Doctor Doom from “The Fantastic Four” was from a fictional European country. Prince Namor, the Sub-Mariner (more anti-hero than villain) was half white human and half blue Atlantian. Marvel comic books bad guys The Juggernaut, Kang the Conqueror, Doctor Octopus, and on and on were white guys.

Same for DC Comics villains Lex Luthor and The Joker. Brainiac was green and an android.

Actually, I guess you could say that comic books in the 1960s were racist just because everyone was white, or mostly everyone, heroes and villains alike.

I know there was a streak in the 1980s and 90s where Muslim/Arabic people were depicted as terrorist bad guys. Earlier than that, African-Americans and Latinos were cast as gang members. Go back far enough, and Asians were shown as either diabolical evil masterminds or buffoons.

So now it’s white people who have a turn at being evil because of the alt-right and white supremacy (and of course, Bad Orange Man).

…In 2016, a bust of HP Lovecraft was removed as the trophy for the World Fantasy Award, but the change had caused so much debate that a new trophy — a twisted tree girdling a full moon — wasn’t released till the next year. Last year, after the death of Harlan Ellison, obituaries from grieving fans were mixed with accounts of his serial sexual harassments, including of women author peers. Two months later, NK Jemisin made history by winning her third consecutive Hugo Award for the best novel. Veteran author Robert Silverberg denounced her acceptance speech as “graceless and vulgar” for having passionately spoken against the obstacles faced by black women writers in SFF, again to the thundering applause of the auditorium in San Jose, which I was present to witness. Jemisin’s speech was in more than one way a precursor to Ng’s.

The change in our genre is a reflection of the change that’s happening in the world. As a genre, SFF is fairly new — barely a century old — and, while science fiction in particular (less so fantasy and horror) has always worn a progressive veneer, the stories of progress have always belonged to a small, privileged group of people. But SFF is also a hugely popular and consumer-facing genre, which means trends are driven by those who consume the stories. Changes in SFF are a direct result of the changing reader and buyer demographic, which no longer simply constitutes white men in the West….

I have no idea what the problem is with HP Lovecraft, and although I have particularly enjoyed Harlan Ellison’s writing, I know he was a difficult human being. I’ve written before about Silverberg’s controversial comments on Jemisin.

Frankly, I couldn’t be more delighted that there’s enough room at the table now for writing talent from all over the world and across the human spectrum to sit and create.

I’ve also written before that it might be a little too easy to demonize some of the people at that table, especially since, from many perspectives, white males have held exclusivity to it for a long time.

He came up again, along with the highly controversial Jon Del Arroz on another Pixel Scroll under item 14: 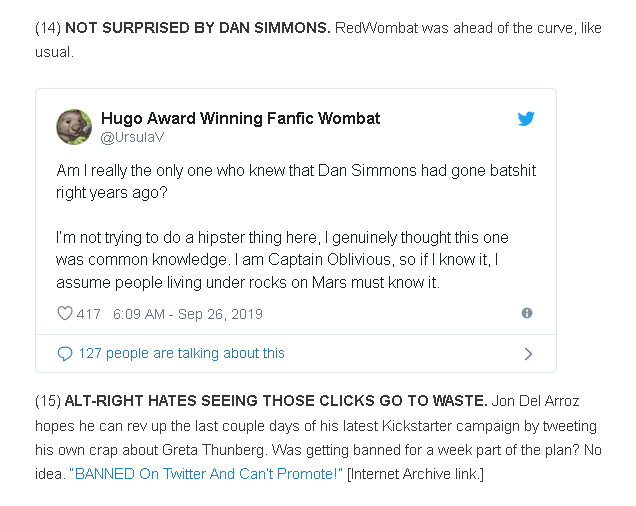 Makes me wonder why I can’t go to Simmons’ official website. It just could be down for technical reasons or he may have been hacked for his statements against Thunberg. Opinions and politics are funny that way.

Which brings me here to David Gerrold‘s comment on his Facebook page. It’s long, so I’ll quote only from what I read on File 770:

(14) ANOTHER WAY OF LOOKING AT THINGS. David Gerrold contends art and the artist should be regarded separately in his public Facebook post:

So let’s say that I point out that the owners of a specific fast-food chain have donated a lot of money to anti-LGBTQ+ causes.

This is not an invitation to say:

“The food is terrible.”

Let’s say that I point out that a particular actor has said some unsavory things about politics. This is not an invitation to say,

Or maybe a well-known author has said something egregiously stupid. That’s not an invitation to say,

“I never liked his writing in the first place.” …

I suppose in that first part he’s talking about Chik-Fil-A, but it’s an interesting point. It brings up the whole Jeannette Ng, John Campbell, award renaming matter. If Gerrold is right (and I say that as “correct” not in the political sense), then it would be possible to separate Campbell’s positive contributions to science fiction from his terrible personal opinions. It would also absolve Marion Zimmer Bradley‘s history as a child abuser from the long-running anthology series (scroll down on that page) bearing her name.

So where is my endless rambling leading?

Regardless of what or who entertainment labels as bad or evil, in real life most of us aren’t purely good or bad. Most of us are flawed but with many good qualities as well. My over sixty years of life have proven that to me repeatedly, and I’ve lived inside my skin long enough to realize that about myself as well.

What I’d like to see in a villain is not a type or stereotype, but an interesting and flawed human being. What I like about Doctor Doom is that he’s interesting. He hates and is jealous of Reed Richards (Mr. Fantastic) because inside he realizes that Richards is the greater inventive genius. Doom also loves his dead mother, so much so, that each year on the anniversary of her death, he tries some method of releasing her suffering soul from Hell (she was a witch after all). You can’t totally hate a guy who loves his Mom.

I don’t want my villains to be all bad. Yes, as a relatively novice fiction writer, it’s tough to create a bad guy/gal who is complex. You want the villain to be so bad that when they get what’s coming to them, the reader/audience will cheer.

But somehow, that’s not satisfying in the long run.

So whether it’s people of color, white supremacists, or green androids, if you’re going to create a villain, avoid stereotyping of ANY type and make that person an interesting and flawed human being. Then you’ll get my attention. I hope to do the same.

And as far as real-life bad characters go, yes, white supremacists and the radical alt-right should and must be called out for who and what they are.  Remember though, that just because they are white doesn’t mean their insanity spills over on the rest of us. Also remember that villains can come in any size, shape, and color. Real life doesn’t stereotype. It just is.

EDIT – 9-29-2019: Apparently, I got Mike Glyer’s attention on his latest File 770 post, though he doesn’t mention me or my blog by name. I guess I should be honored, except I wasn’t so much suggesting a conspiracy theory as pointing out that hackers, from time to time, have attacked websites containing content with which they disagree. Sorry, Mike. No sale.