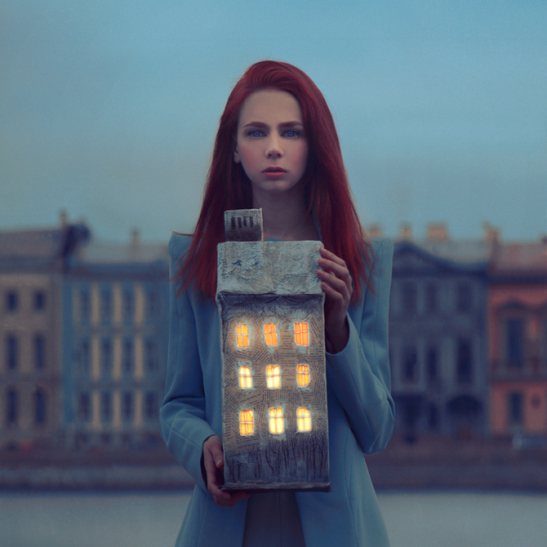 She was tall, with long, red hair that drapped her blue jacket clad shoulders. Her eyes were an intense green and her face was smooth and pasty, like melted wax.

But what Sean saw in her hands gave him pause.

“Young lady, I don’t know what…” The sixty-five year old writer, in Glasgow to visit a dying friend, stared at what she was holding.

“Please, you have to go back.”

“Your doom if you choose to continue.”

He had the taxi drop him off at a pub not half a block from where his old friend Brian MacGregor lived. He needed to have a quick one before facing Brian’s and his mortality. She was standing only a few feet from his destination.

He looked at the object in her hand and then at the building behind her. She was holding a miniature of Brian’s home. He could see lights in the tiny windows, but worse than that, a shadow moving inside.

Isla Easton, a Scot, like your Mother, your grandmother…”

“A witch, like all the Easton women, Mr. Graham. I suggest you return to the Bon Accord before it’s too late. Have another pint. I hear their chips are very good.”

“Already dead. And what killed him is waiting for you.”

“The demon cares not a whit what it uses to end a man’s life.”

“Go back to the pub. Wait one hour. Then you may visit your friend. The demon is troublesome but not persistent. It bores easily, and when you do not arrive promptly, it will depart.”

“I can’t believe anything you say.” He was lying. Even six-and-a-half decades and a life lived far from his family’s superstitions made him doubt himself.

“Then believe your own eyes.”

The witch held the model structure out toward his face. A chill wind blew from the direction of the river behind him. The sun had just set to his left and early December in Scotland had never felt colder. In spite of himself, Sean leaned toward the object in her hands, toward the windows shining with sickly gold.

Then inside he saw them, the two of them. Brian was lying motionless on the carpeted floor of his study. Bookshelves lined the academician’s favored room. Pacing back and forth behind his lifeless body was something not human, something slavering. Then Sean remembered the oath and the curse they had sworn as young men. They had both craved success, wealth, and even glory. The price they chose to pay was horrible, but neither of them truly believed.

Brian hadn’t believed and now he was dead. Somehow a shade from the world beyond, some relative of his Mum was here to save Sean.

He ran. It was only half a block, but he was out of breath when he reached the pub’s door and then crashed through.

A few seconds passed as everyone stared at the American and then looked back to their drinks and their mates.

An hour later, Sean, into his fourth pint, a headache forming behind his eyes, heard the sing-song sound of police and ambulance sirens. They stopped in front of Brian’s place. Before long, from the sidewalk just outside the pub, he stood watching his friend’s dead body being carried out on a gurney.

Of the demon and the witch, there was no sign. There was nothing left for Sean to do but take the return flight back home, and pray to the spirits that the thing wouldn’t come for him.

My wee tale was pretty much random stream of consciousness.

10 thoughts on “The Warning”