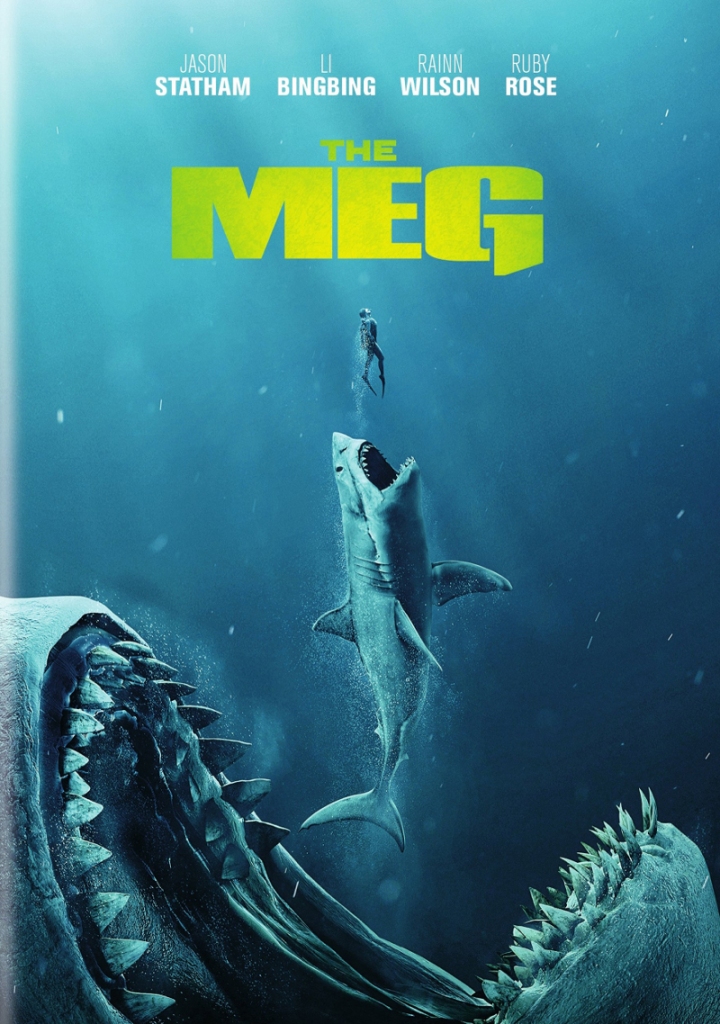 Promotional image for the 2018 movie “The Meg”

Right about when the 2018 film The Meg was being watched in theaters, I was reviewing the book it was based on.

Last night, I rented the DVD of said-movie and watched it.

The movie stars action actor Jason Statham as Jonas Taylor, a former rescue diver who, five years before, had encountered a Meg while trying to save the crew of a sunken nuclear submarine. He sacrificed two of his own people in an attempt to save eleven more. Accused of panicking and cowardliness, he retreated into booze and Thailand.

Rainn Wilson plays Morris, the billionaire financing Mana One and a right pr*ck if ever I saw one, but Wilson seems to excel in playing such roles.

The movie’s plot and story line are a lot simpler than the novel, but that makes the film flow better, I think. Characters aren’t as complex, but let’s face it, this is about the shark.

A submersible, piloted by Taylor’s ex-wife Lori (Jessica McNamee) is sent down to the bottom of the Mariana Trench to discover that a deeper part of the ocean is being hidden by a thermocline of hydrogen sulfide, which people have always assumed was the bottom of the Pacific. In the unexplored environment, the deep sea device attracts the unwanted attention of a Meg and is damaged and unable to surface. While Zhang and project leader Mac (Cliff Curtis) travel to Thailand to recruit Taylor, Suyin takes it upon herself to attempt a rescue, promising her adorable eight-year-old daughter Meiying (Sophia Cai) that she would return.

Taylor reluctantly takes the assignment after learning his ex-wife is among the victims trapped at the bottom of the ocean.

He manages to rescue both Suyin and the submersible, but one of the crew, Toshi (Masi Oka) realizes he must sacrifice his life so that the others can get away. In the process, not one but two Megs escape to the upper ocean, but this isn’t known until later.

Taylor’s main detractor, both five years previously and now, is Dr. Heller (Robert Taylor). Ultimately, when the first Meg shows up, he ends up eating his words, but he’s big enough to apologize. Taylor didn’t seem big enough to accept it, though.

Sophia Cai managed to steal every scene she was in as she played the wonderfully precocious Meiying, but I suppose that was the idea. However, in real life, if I were hunting a Meg on a boat in the ocean, I probably would have had her evacuated by helicopter and sent to relatives rather than bring her along. I get it. Putting a child in peril of being eaten by a shark the size of a city bus heightens tension, but that makes Suyin the worst Mom ever.

The film was pretty predictable, even the second Meg (even if you didn’t read the book). Since the film was a joint American/Chinese venture, we had plenty of Asian venues, which I welcomed. These sorts of stories are usually pretty American, and who says that a gigantic shark couldn’t attack a crowded beach on Sanya Bay instead?

There were tons and tons of scientific inaccuracies and phony science, but that’s not the idea of the movie. It’s supposed to be scary and fun.

It actually wasn’t too scary, which was a surprise. I don’t think being scared out of my mind is particularly entertaining, so I rather liked that it didn’t terrify me. It’s pretty much a high-budget “B” film and an okay way to kill a couple of hours. It also made ton of money, even though it had “meh” reviews, so there’s a sequel in the making.

The author of the first book wrote five or six more, so there’s plenty of source material to work from.