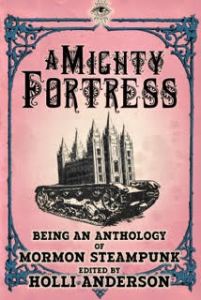 Promotional image for the Immortal Works anthology “A Mighty Fortress”

By now, most of my regular readers know that my short story The Deseret War is going to be published in an Immortal Works anthology.

I just heard that A Mighty Fortress: A Mormon Steampunk Anthology Book 4 is available for pre-order NOW for automatic delivery to your Kindle device on February 18, 2020.

That’s less than four weeks away. Here’s a summary:

Once Stephen Isaac Eddington converted to Mormonism in his native London and realized the severe persecution the Church was enduring in the United States, he knew he had to use his unique skills to help defend the faith. But to do that, he would have to steal an incredible invention devised by his scientist mentor who had recently perished, and the greedy and corrupt tycoon who had financed the venture. Eddington and his ill-gotten technology arrived in Utah well ahead of the U.S. Army troops who the President commissioned to remove Brigham Young from power and establish a new Governor over the Utah territory. Now, instead of the Church being a mere pawn at the hands of the government, he provided them with mighty weapons that would not only protect the Church, but establish a brand new nation. However, even Eddington couldn’t anticipate the heavy consequences of his actions.

Don’t miss this strange and wonderful mix of Mormonism and Steampunk in the fourth annual edition of this production. Pre-order right away.

9 thoughts on “Pre-Order “A Mighty Fortress” Which Features My Short Story “The Deseret War” NOW!”