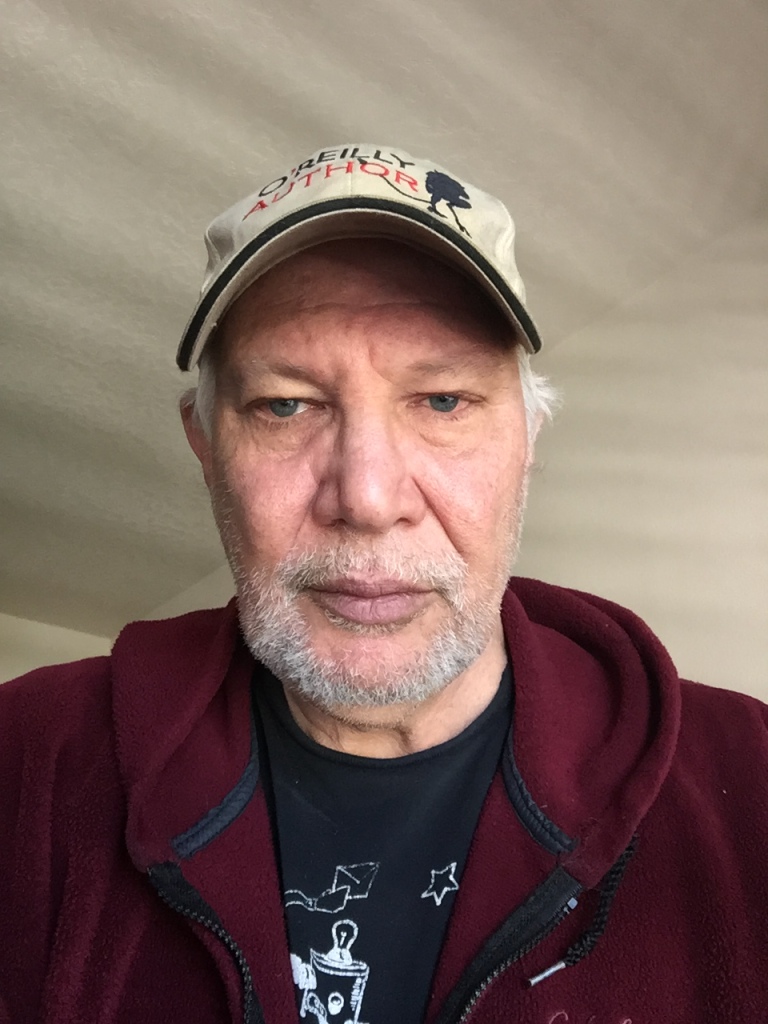 I’ve been hearing the phrase the new normal a lot lately. It’s the idea that even once the COVID-19 pandemic has passed, the U.S. and the world won’t simply go back to “business as usual,” as if the pandemic never happened.

There are some people who even see this “new normal” as an opportunity to “improve” things. For instance, House Member Alexandria Ocasio-Cortez is advocating for people to not go back to work once restrictions are lifted. She is specifically referencing people who work 60, 70, and 80 hours a week at low paying jobs and who feel no security in their lives. You can watch a video of her statement on YouTube.

Democratic Presidential candidate Joe Biden has said that the pandemic response is an opportunity for structural change. Of course that might only be a good thing if you share his political viewpoint.

Yet, from what I’ve seen, the protests people are actually doing go in the opposite direction from Ocasio-Cortez and Biden.

A few days ago, people in Orange County, California (where I used to live) held a mass protest at Huntington Beach opposing Governor Gavin Newsom’s closing beaches in Orange County and only Orange County. He did this in response to a perceived overcrowding at Newport Beach the weekend before. Just how crowded the beach was has been disputed, but based on the photos, it looks crowded.

Nevertheless, Californians are pushing back, including at a rally at the California State Capitol where 32 people were arrested, both because they were in violation of Newsom’s stay-at-home order, and because of the ban against protests on state property (but I thought people had a constitutional right to protest on any public property as long as it was peaceful).

These are just two small examples (there are tons more) of how people (supposedly, most or all of them are conservatives as far as the news media goes) are getting fed up with being penned in. A lot of people, both on the right and left sides of the aisle, say the crisis is definitely being politically “spun,” although they disagree about the direction of spin.

Meanwhile, fingers are being pointed in all different directions, including at WHO and China, but given the aforementioned “spin,” it’s very difficult to know where the facts can be found.

I discussed all this, including reports I previously mentioned, that city and even national governments, have been overestimating the number of COVID-19 deaths to one of my sons, who is probably the most liberal member of my immediate family.

He agreed that the number of deaths is likely exaggerated, but the number of active cases is probably underestimated. I can accept that based on reports that some people are asymptomatic when infected, or may have cases so mild, they don’t identify it specifically as Coronavirus, or if they do, they don’t seek medical attention.

Speaking of spin, I’ve heard tons of stories in the news and social media about how slammed all of the hospitals are, and how out-of-control Coronavirus cases are deluging medical professionals. And yet, just last month, one of the largest hospitals in Boise announced cuts, furloughs for some hospital employees because ‘the sustained loss of volume and increased costs associated with COVID-19 preparedness is outpacing our revenue,” President and CEO Odette Bolano wrote in the letter. “Our revenues in the inpatient and outpatient settings have declined anywhere from 50-80%”.’

Okay, that’s Boise, Idaho, but what about other communities?

To try and get an answer (the news can’t always be trusted), I went on Facebook and asked my “friends,” people who live all over the country, including hotspots such as New Jersey and New York, what their perceptions were about their own medical institutions.

JG said ” NJ is not overwhelmed – neither is NY.”

AM, who lives in Vancouver, British Columbia, said “A friend of mine had to go for an x-ray at a local hospital and she was joking with the technicians that they were getting too close, etc. They all had a good laugh. Then she asked them if they knew anyone who was sick with the virus and all three said no. She asked if they had anyone in the hospital that was sick and they also said no. They work in a hospital, and they don’t know ANYONE who is sick?

I mentioned that you’d never see that reported in the news, and she responded, “No, I’ve only seen crying nurses with faces bruised from the PPE they have to wear.”

A different AM said “Okay, lots of factors here:
1) NJ has no epidemic. The metro area and a bit south does. The rest of NJ has a cold and is doing perfectly well.
2) Even in the metro area and NYC, the hospitals are not being overwhelmed. They are not CLOSE to overwhelmed. They are perfectly fine and being overwhelmed was never an issue
So the answer is honestly a pretty straight “No, they’re well supplied and staffed and anyone who says otherwise is selling you something”

TK (I don’t know where she lives) said “in my community they said they were short in supplies… But we’re reopening and people are acting like this is all one big hoax…. I feel for myself and my safety I’ll take it all with a grain of salt. I’m not scared but i also don’t like being sick. So I’m cautious.”

EI, who lives in New Zealand, said “We have like 6 people with covid in hospital in the entire nation. The natives are getting restless.”

Yes, “the natives (people) are getting restless,” and while I agree, we need to continue to be cautious, not only do I think the situation is misrepresented in the media, but I think this so-called “new normal” is an extension of that spin and misrepresentation. Remember what Biden said about “opportunity.”

My own state has put up a website called Idaho Rebounds, which outlines a four-part government program of gradually reopening the state. It’s pretty, you should pardon the word, “conservative,” and seems to take care in protecting people while allowing businesses to gradually re-open. At any point in the process, if cases start to creep up, that particular phase can be rolled back.

Now let me tell you about my Sunday.

I slept late, just because I could, and for once, I was able to sleep (no promises for tonight, however). I got up, puttered around, drank coffee, ate breakfast, then went outside to mow the lawn. That’s pretty normal.

Today was the day my wife and son decided that our nearly five-year-old granddaughter should start riding her bike without training wheels. To be fair, she hasn’t been riding it lately even with training wheels because she had a flat tire. When the inner tube my wife bought for the tire didn’t fit, and then didn’t hold air, my son, wife, and granddaughter went shopping for a new bike. 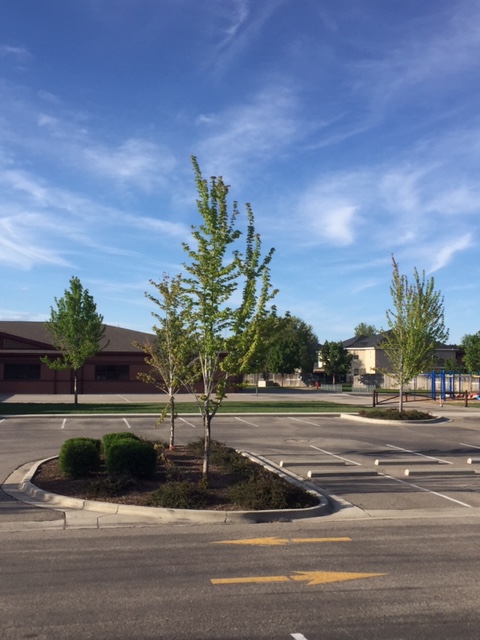 © James Pyles – The elementary school behind my house, including “crash site”

By that time, my other son came over and the bunch of us went into the parking lot of the elementary school behind my house so my daughter could practice. She was doing really well for a while, but then, because she couldn’t turn, hit a planter and smashed her crotch into her bicycle. After that, she was more interested in her scooter, so we didn’t push it.

My wife made a general hamburger, beans, and fries lunch for us, and afterward, my two sons, grandson and granddaughter (well, Daddy helped her) played Star Fluxx, which is an interesting and somewhat random card game my son (Uncle Mikey) gave my grandson for one of his birthdays. It’s the basic card game “Fluxx” with a science fiction twist.

After that, my son “Dad” had to get the kids back to his house because every Sunday afternoon, the kids move between Dad’s house and Mom’s.

But all that felt really normal. Not “new normal,” but just normal. I really enjoyed it.

Was it absolutely safe? Probably not. Both of my sons have jobs where they work with other people. Since one works in a hospital and the other in a convention center, they both wear masks on the job, but not elsewhere. The grand kids move between Dad’s house and Mom’s, so they are exposed to numerous family members, including Dad’s girlfriend, their Mom, and the other grandparents. My son David has gone camping and had other outings with friends, and I’m sure they didn’t observe social distancing. 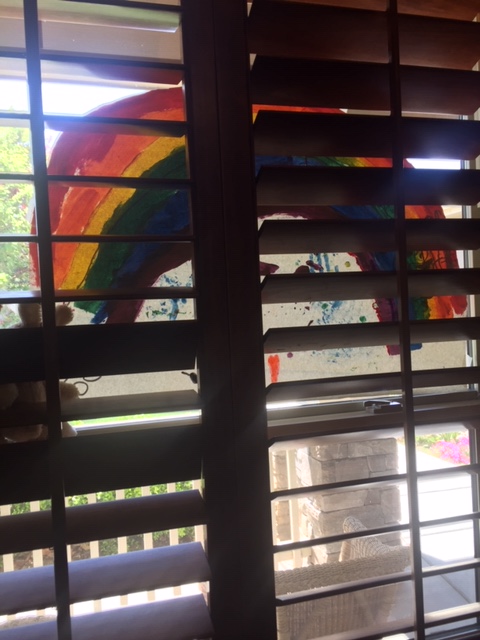 © James Pyles – The view from where I work from home.

My wife goes shopping, and occasionally, so do I. I maintain social distancing for the most part, but it’s really difficult. Sure, standing in line is okay, but people zipping around with shopping carts (even with one-way aisles) definitely enter the “six foot zone”.

But so far, acting “old normal” with my family hasn’t resulted in any illnesses.

I can do my part-time slave job from home, fortunately, which is nice for a few reasons, and a pain for a few others.

The churches and other houses of worship could open their doors again today, but since I still can’t visit with my elderly Mom (she lives in an independent living home and is on total lockdown), I couldn’t take her, so I didn’t go. Churches still have to maintain social distancing and have a plan for frequently cleaning all surfaces.

Looking at all the restrictions and the new normal going forward, even assuming that the curve continues to flatten, I still prefer the old normal. Especially if I can help my granddaughter ride her bike, and play card games with my family.

Oh, and if the “new normal” means being tracked by the government, forget it. They already know too much about me.

EDIT: This is a conservative news source, so a lot of people won’t take it seriously, but it states 5 independent research studies put the death rate from COVID-19 at one percent or less specifically because there are so many more undiagnosed cases of Coronavirus. Wow.

37 thoughts on “I Want My Old Normal Back”