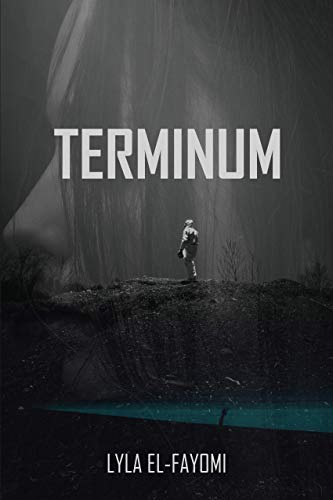 Cover art for the novel “Terminum” by Lyla El-Fayomi

Disclosure: This is my first review of an indie SciFi book for Reedsy Discovery. In exchange for a free digital copy of a book, they ask that the writer craft a review of between 300 to 400 words in length and have it published on their site prior to a specific date. Basically, it’s free promotion for the book, Reedsy, and the reviewer.

I chose Lyla El-Fayomi’s Terminum to review because the premise was compelling. An experimental virus stops people from aging but at random points in their lives. However, the darker side is that some of those infected will be abruptly killed by an unknown side effect called Sudden Death Syndrome.

In investigating a cure, scientists Yasmine Holloway and Leo Genix suddenly become fugitives, being hunted down both by law enforcement and bounty hunters. They are thrust into the shadowy realm of a group of covert operatives who have, perhaps for decades, been aware of a conspiracy to hide the truth about the virus and to prevent them from ever delivering a cure.

While the author’s background as a doctorate student in Molecular Genetics is evident in her novel, the character descriptions and some of the extrapolation tends to be overly long. A significant portion of the first part of the book stalls the action and tension of the overall story, and almost seemed like filler.

There were times in the book, when the action seemed to take unexpected turns in geography and time, and I wasn’t always sure how one scene connected to the next.

The story takes place in the far future, and to be fair, anticipating probable technology so far ahead presents a challenge, especially if you expect 21st century readers to be able to relate to the characters and their environment.

The latter part of the novel ramped up the suspense, but as I was toward the end of the book, the plot did not seem to be resolving. Then at the last page, everything ended all at once, like slamming on the brakes of a speeding car. I can see where a sequel is being set up, but how this story ended was not only surprising, but perplexing.

No, I don’t expect happy endings in the tales that I read, but this almost didn’t make sense. While the overarching concept of this novel is fascinating, its execution wasn’t quite up to what I expected.