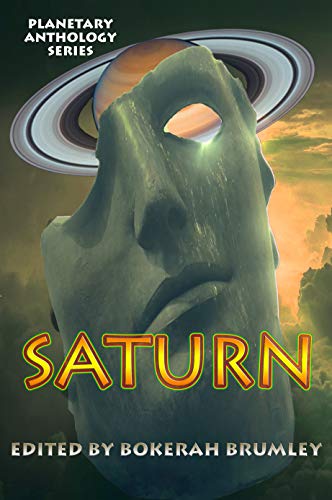 Cover image for the anthology Saturn.

As I’ve mentioned before, my science fiction/time travel short story “Saving the Apostle” is to be featured in the Tuscany Bay Press Planetary Anthology Saturn.

It’s available for pre-order from Amazon now (see the link above) for delivery to your kindle device on February 16, 2021.

However, if you can’t wait, you can read it right now. The publisher has placed an Advanced Review Copy (ARC) on Booksprout. Of course you have to be a Booksprout member AND you have to agree to leave a review in order to read the book.

From our point of view, this means that the reviews you leave will already be on Amazon when the book launches.

If you are not a Booksprout member but would like to review an advanced copy of the anthology, contact me by commenting on this blog post. I’ve got copies in PDF, epub, and MOBI. As long as you’re willing to leave a review, I’ll be glad to send you a finalized copy of the book in your desired format.

Oh, a blurb from my short story to whet your appetite:

“You idiot!” He had to curse and rant using English and Arabic loan words which were incomprehensible to the first century Jew.

“In the time I come from, most of the industrialized nations of the world have sent their armies to surround Israel. Unless the diplomats pull one last rabbit out of their collective hat, we’ll be attacked by an overwhelming military force, one we can’t even begin to hope to defeat. Israel will be destroyed. My family will be murdered. For God’s sake, do you want me to tell you about the atomic bomb?”

As if reflected in Paul’s eyes, Moshe could see the destruction of Jerusalem in a great mushroom cloud, as well as Tel Aviv, Be’er Sheva, and his own beloved Haifa. He also saw his wife Tamar, their 15-year-old daughter Hadassah, and their sons, 12-year-old David, and 8-year-old Eitan. Yes, a sufficiently changed history might “undo” their very existence, but he had to take the chance. In the virtual display, the cursor hovered over the field generator controls.

Moshe stared at Shaul with grim determination. “I have the power to control your consciousness and memory.”

“Your abilities appear to have no bounds, as indeed your strange garb testifies.” There was no mistaking Paul’s sarcasm.

“Do you actually remember me pulling you away from the man you were helping in the water? Do you recall me lifting you up? You were conscious and talking at the time.”

The Apostle paused searching for a memory he knew must be there but wasn’t. “No, I do not recall. I remember you, or some figure, approaching me from the shore, but then … in the next moment, I was here with you, waking up by the fire.”

The emotion had drained out of Paul’s voice and Moshe felt himself growing calmer.

“It’s built into the suit. I call it the Shalimite field,” Moshe said. He wondered if Paul would recognize the name of the Canaanite god of dusk. “I can turn it on with literally the wink of an eye, so don’t think about attacking me. Besides, in this suit, I’m much stronger than you are.”

“I will not attack you, Moshe.” Rav Shaul had regained his original composure but beyond that, it was impossible to tell what he was thinking.

“I only used it before because it would keep everyone who saw me at the shipwreck from remembering me. For that matter, having discovered you missing, and the Romans convinced you would have never tried to escape, everyone will believe you were pulled out to sea by the storm and drowned. No one will come looking for you unless you give them a reason. Please, for the sake of generations of yet to be born Jews, do not give them a reason.”

“And if I choose to do otherwise?”

“I can do away with more of your memory, enough that when you wake up again, I will be gone and you will have no idea how you got here. No memory of meeting me or this conversation will remain.”

“Do you believe this will render me incapable of determining my location, even without explanation, and returning to Rome?”

“It depends on how many months or years of your past you are prepared to lose.”

“If I should believe the validity of your claims, you would do this to me?”

“It’s you against all of the Jews who were tortured and murdered at the hands of Christian persecutors across the centuries, the six-million who died in the Holocaust, and the nearly seven million Jews in the modern homeland in my day who are about to die in the last war against Israel. What decision do you think I will make?”

Moshe felt the tremor first, not like an earthquake, but as if he were standing on a very rapidly oscillating platform, grains of sand and pebbles rising and falling to its rhythm. He looked at Paul who seemed just as befuddled.

Then, although the sun was over an hour in the morning sky, the surrounding light flickered with differing shades of gray, like a person rapidly thumbing through a notebook, or a vast neon light preparing to die.

Finally, at Moshe’s right, a man was standing several meters away who hadn’t been there seconds ago, and on the wide expanse of the beach, anyone approaching would have been noticed long before now.

Hideous, mind-altering panic seized Moshe in an instant, and he dropped to the sand, curling into a fetal position, gritting his teeth, his eyelids shut tight, his whole body trembling. The air was cold around him, despite the fact that his suit protected him from variations of temperature. His virtual display vanished, and the weight of the suit held him fast to the ground, a telltale sign that the servos had lost power.

He heard a sound, like a voice and not a voice, but it made no sense. Moments later, there was movement to his left where Paul had been when this phenomenon had struck.

“Rise, Moshe Ben Isaiah.” The voice from directly in front of him was commanding, deep, resonant, and human, but who besides Paul could possibly know his Hebrew name?

Read the whole story of Moshe’s fantastic adventure two thousand years in the past and his desperate mission to save his family and his nation in my short story “Saving the Apostle” in the Planetary Anthology Saturn.

To support my work, Buy Me a Cup of Coffee!