First of all, no one is more surprised than I am to have won an award. I have no idea what the nomination process was or how I got on the list, but “wow.”

I actually found out on Facebook first before I checked my email. Then once I did, I saw that Richard Paolinelli announced it on his blog:

Thanks to our new overlords and masters in Silicon Valley, the announcement of the 2021 Helicon Awards has been moved up 36 hours.

Check out the 16 winners and buy the books and discover some great authors!

Yes, it’s been a rough week for a lot of us, especially as many high tech platforms continue to censor anyone who leans even slightly right, but I’ll cover that another time.

Anyway, that leads to the 2021 Helicon Award Winners announcement.

UPDATE: You can purchase a copy, complete with the winner’s award badge on the cover, at Amazon.

I haven’t really been familiar with this award or the Helicon Society so I looked at their About. page. Apparently, they’re only a few years old, and this is only the third annual award…well, I can’t say “ceremony,” but still, “wow.”

The society exists to promote Superversive science fiction and fantasy. Apparently the society isn’t a formal organization. They collect no fees and membership is by invitation only. You can receive an award without being a member, and if you read this year’s awards as well as those for 2020 and 2021, even the most casual SF/F fan will recognize a few famous names.

Another thing about the society:

Membership in the Society is considered private, unless the member chooses to publicly announce they are a member of the Society. Any inquiries, or requests for a membership list, will be ignored.

I guess there’s a reason for that. In a Google search, I found an archived post at Mike Glyer’s File 770 fanzine that spoke of the awards (item 13, so scroll down) in less than complementary terms. I won’t post a quote here, but you can click the link to find out more.

Glyer also went out of his way to trash a New Author Award named for one of my favorite writer’s from childhood Laura Ingalls Wilder, of whom the US Association for Library Service to Children did a great disservice in my opinion.

But that’s also a story for another time.

There have been complaints about controversies surrounding Melvil Dewey (think Dewey Decimal System) who has a Helicon named for him. On top of all that, they have an award named for John W. Campbell who has, shall we say, posthumously been denigrated, and this year, said-award was given to J.K. Rowling (Harry Potter) who has taken criticism for comments she made on twitter.

So you can see that, depending on who you are and your point of view, to avoid sharing their “fate” on social media, some people might choose not to openly disclose their association for the society and its awards.

I was hoping 2021 would get off to a better start, but there’s a lot of circling of wagons going on out there.

I suppose since I started down this road, I might as well see it through. Best Selling UK science fiction author Neal Asher, who I follow (so far) on twitter and Facebook, is both highly successful and pretty conservative. Today, on twitter, he posted two articles that are bound to make a few people curl their toes in offense:

The Woke Cult Kills Everything, Even Science Fiction AND Rescuing Science Fiction from the Horde of ‘Woke Zombies’ (the latter of which I haven’t had the time to read yet. 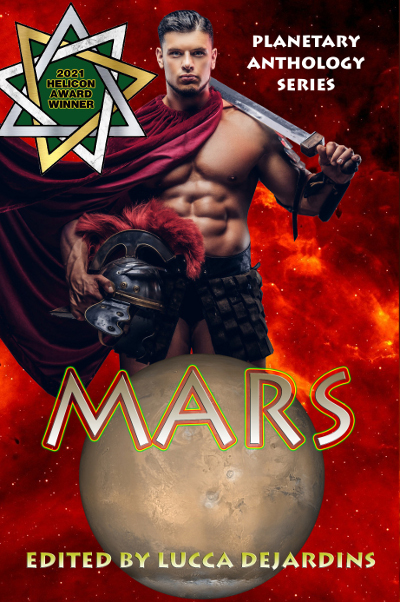 I suppose one reason more “mainstream” SF/F online outlets might be critical of superversive authors creating their own awards is that we choose not to travel the psychological, ethical, and moral path that more well-known Hugos, Nebulas, and others have selected in the name of their world view.

I probably shouldn’t have made this political, but the “behavior” of both twitter and Facebook has affected access to the Helicon Society’s accounts on both platforms. Under the circumstances it’s difficult to separate receiving an award from the intent of the folks behind it (be nice if they had a certificate, but I don’t think they’ve become that “formal” yet).

Oh, again thanks to Google, I came across Jason Cordova’s announcement of him winning a 2020 Helicon for Best Military Science Fiction for that year. Posted the link just to share the wealth, so to speak.

Too bad I’m not much of a digital artist. I’d love to edit a cover image of “Mars” to say, featuring the Award Winning short story “The Three Billion Year Love” by James Pyles. Has a nice ring to it.

To support my work, Buy Me a Cup of Coffee!

EDIT: Oh look. Richard Paolinelli granted my wish. Cool. Too bad it’s not on the actual product but you can’t have everything.

EDIT2: All the winners were given digital badges so I edited the cover again, plus added the badge to the header of my blog.