Well, it’s not every day that Mike Glyer uses his File 770 fanzine to insult me, so I guess I should be honored. I’ve been criticized for being an attention hog (look who’s talking) and for not knowing the various names of SF/F authors involved in the Baen Books forum debate (oh the horror…I didn’t kiss someone’s arse or something).

Anyway, here’s the link to the relevant Pixel Scroll. Scroll down for item 6.

Now here’s the screenshot since things sometimes go “poof” on the internet  (keep on scrolling).

Actually, though I doubt Glyer would understand, I’ve been more curious than anything, and like my previous commentaries on WorldCon and the Hugos, I’m looking at all this from an outsider’s point of view (unlike him and all the various “names” cited who seem to have an intimate connection to this community and all the unsavory politics involved).

Speaking of which, maybe he or someone can help me with another mystery (at the risk of being accused of being an attention hog, I was going to write this next part anyway).

Someone commented on one of my blog posts that all this “he said, she said” about Sanford, Baen, Weisskopf, DisCon III and the like was just so much apish chest thumping (my term, not her’s) or smoke and thunder, but with no real purpose. She suggested that finding a solution that would be satisfactory to all parties would be the best outcome.

Then she even told me what should happen. This won’t be an exact quote, but close enough:

[Jason Sanford] issues an apology to Baen and Toni, saying something along the lines of: I should’ve have consulted with them first, and that I fully support Toni’s shuttering of the forum for her investigation.

Then add something to the effect it was not my desire/intention to have Toni dis-invited, and ask that the WorldCon comittee reverse their decision as an act of good faith etc., etc.

Of course, Hell will freeze over [first].

I thought it was terrific advice so I posted it on twitter. 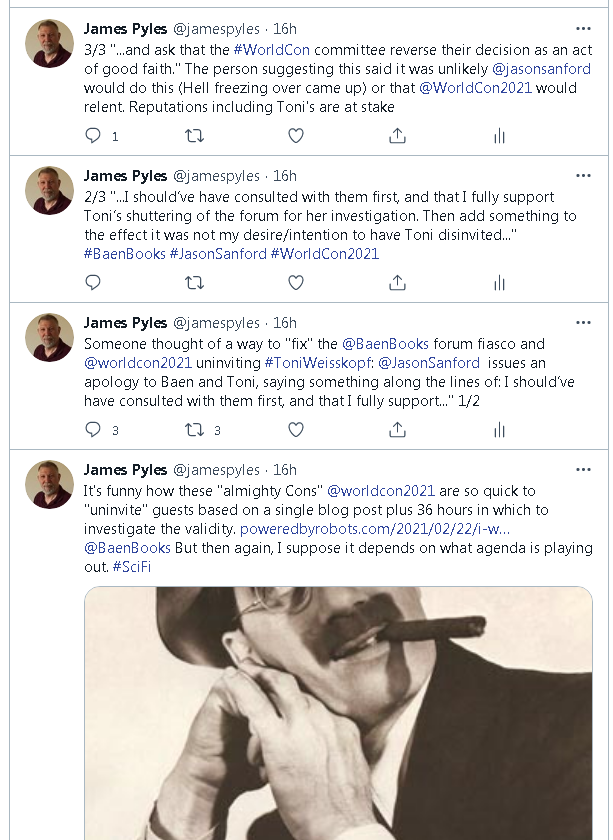 Oh, you’ll notice I took a shot at WorldCon as well, not that it will matter (and yes, I originally thought my comment would take only 2 tweets, but it took 3, which is why the numbering doesn’t match).

Lo and behold, someone named Gayathri popped in and had her say. She’s followed by Jeannette Ng among others, so I guess she’s a big deal. However, while her twitter bio says “SFF, Mystery and Western writer; Social Junkie, she/her; all opinions my own!” and she lives in the SF Bay Area (which I did as well many years ago), she didn’t provide links to anything she’s had published.

In spite of Glyer’s jab at me, I have been taking a look at the names and works of the folks I’ve encountered during this whole snark hunt (or has it become a witch hunt, and if so, who is the witch?), so I’d like to find out more about Gayathri as well (a quick Google search didn’t turn up anything definitive).

Oh, thanks for the free publicity, Mike. I know you meant it in a negative manner, but as they say in marketing, there’s no such thing as bad publicity.

I forgot. The comments. Let’s see if any of Glyer’s fans said something specific about little ol’ me: 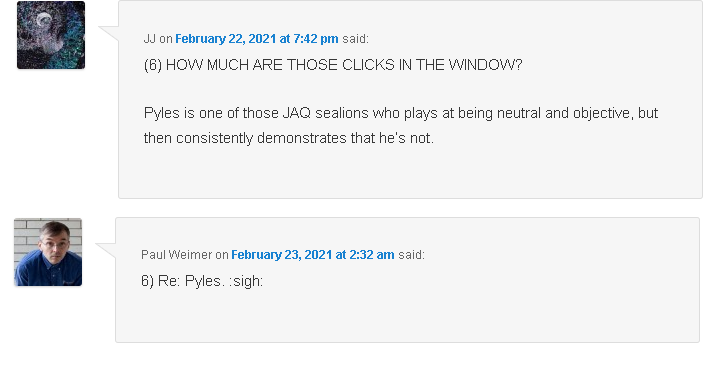 Apparently, I’m such a disappointment, especially to Paul Weimer. Oh, well. I guess I’ll never live up to the expectations of this crew. Not sure if I want to, though. As a guy who just reads science fiction, it never occurs to them that they might be the disappointment by bringing in all this “smoke and thunder.”

7 thoughts on “The Beat Goes On: Mike Glyer and File 770 Decide to Aim the Laser of Disapproval at Me (I’m such a disappointment)”