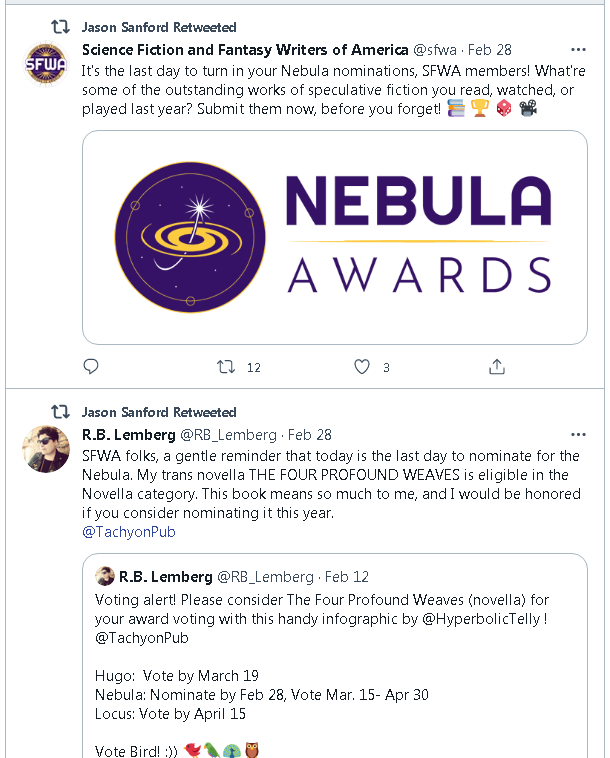 My friend Richard Paolinelli posted THIS on twitter and Matthew Hopkins / Samuel Collingwood Smith sent me the link to his blog post in the comments of my blog.

But I’m not here to talk about that. It just so happened, given the context, that I decided to see if Jason Sanford had blocked me yet (he hasn’t). In checking his twitter account, I saw he posted about the nomination period for the Nebula Awards coming to a close.

I remember as a young man in the 1970s being really impressed with science fiction novels that won a Nebula or Hugo Award. Certain experiences over the past few years have led me to become less impressed. More accurately, I think they meant something once, but they’ve lost their luster.

I tried to find the quote from Jeannette Ng (she hasn’t blocked me yet on twitter either) that said something about how these awards are on their way to becoming more significant now that marginalized and suppressed voices are more prevalent in SF/F.

Other people say the same awards are becoming less relevant because they’ve been taken over by administrators who care more about the wokeness of a piece of creative work and of the creator rather than whether or not the creation and creator are telling a good story. I’m not saying that quality is necessarily taking a backseat to wokeness, but well, something has to give.

Going back to Ng, she’s the one credited with coining the phrase stale, pale, male crowd which I can only imagine is her view of older white males who aren’t particularly concerned with wokeness.

But, with Sanford’s retweets in mind (see the image above), are these awards becoming more or less relevant in the realm of SF/F?

But we all have our favorites or stories that might become our favorites. That’s why people write reviews, so we can get an idea of what’s available and what we might not otherwise become aware of.

Some months ago, my friend Sean Martin died of liver failure. We never met face to face, and in fact, we were pretty different people. But we got started talking about comic books on twitter, he shared his life and I shared mine, and we decided we were friends.

Sean often joked that he was the creator of the longest running gay comic strip no one had ever heard of. It’s called Doc and Raider. Because Sean was my friend and because he created a comic strip, I started to read it…

I’m not gay. I’m not particularly a fan of stage productions (Sean was incredibly knowledgeable in this area), and the themes just didn’t do it for me.

I told him that and he didn’t take it personally.

Oh, we disagreed every now and then, but we also agreed a lot, too. He had a pretty rocky childhood and no kid should ever have been treated the way Sean was.

I found out he died, or rather I suspected it, when his posts on Facebook dropped off (he had stopped using twitter before that because it was too caustic). I visited his FB page and a face-to-face friend of his posted the news of this death.

I said my condolences, but I was Sean’s friend, and when he died…well, he was gone.

Did his voice add something good to the universe? Absolutely, and the lights burn more dimly for me because of his passing.

Did I always understand what he was trying to say? No, I didn’t. That doesn’t matter, though. I’m not going to relate to 100% of the human race, even among those who are my friends.

For the record, he liked some of my writing. He was especially fond of my short story The Devil’s Dilemma which was published in this anthology. I’d written half a dozen variations on Timothy Quinn’s tale on my blog and Sean ate them up. I hope he had a chance to read the final product.

But this is my point. Yes, we can have tons and tons of diversity among creators and creations. Trans writers can write trans stories, gay writers can write stories highlighting gay characters, and in fact, we can all present the universe as we see it, experience it, and live it out.

The whole “stale, pale, male” commentary is absolutely not helpful.

So here’s the yes and no of it. Yes, more voices in the creative pool is a good thing as long as all voices get a shot at it. Boosting marginalized voices just because they’re marginalized and not holding said voices to a standard of creative quality is a “no.”

Opening the door and saying, yes, please contribute because you will have just as much of a chance of having your story published and read as anyone else, but keep in mind, the litmus test, the standard, the bar is quality storytelling, not identity. Identity is just what you bring with you into the story, but you’ve still got to convince the reader the story’s worth reading.

Doc and Raider was and is worth reading, even if I doesn’t really call to me. It certainly calls to someone, and that’s what matters. Sean told a good story. His creations should and must live on after him.

Diverse voices do add to the quality of the world, but only because they are human voices. We all have a human voice, no matter who we are or where we come from. The minute someone like Ng says that some voices count more than others, that takes away from relevancy and meaning. These awards are diminished, faded, less significant.

I don’t know about the Nebulas, but the Hugos are administered by a closed ecology, so at present, it has more to do with the values of a small, encapsulated population, rather than acting as an objective measure of literary and imaginative quality.

That’s why, at present, I’m probably going to choose to read stories based on what other people have to say about them in reviews, as opposed to what awards they may have won…that is, until the awards start becoming more human.

Oh, at least one “dipstick” may accuse me of writing this for the “clicks.” He’s wrong.

One thought on “Nebula Award Nominations are Closing but is that Significant?”