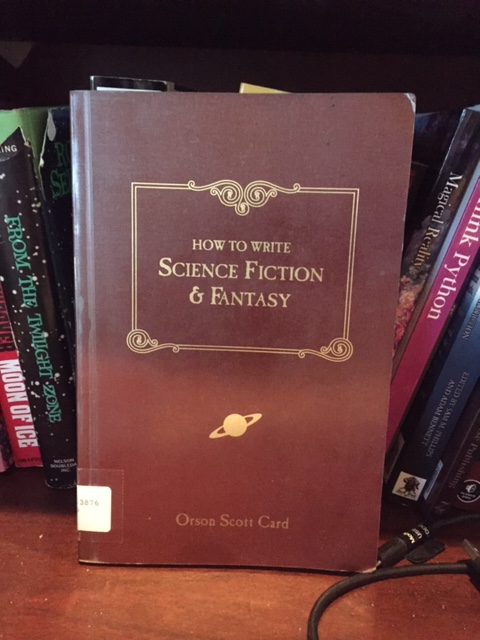 On the heels of my blog posts Looks Like the 2020 Hugo Awards Once Again Sucked, Loving and Fearing SF/F Fandom, and the currently highly popular Is SciFi Author/Editor Robert Silverberg Really Racist and Sexist (or has the internet once again lost its mind)?, a library book I just finished and am about to return caught my attention.

Written by Orson Scott Card (Ender’s Game, Speaker for the Dead) the small book How to Write Science Fiction & Fantasy was my choice to re-read in the hopes of dragging myself out of my current writing slump.

Published in 2001, all of the advice about how to publish, market, and, of course, win awards (Card won two Hugos, a Nebula, a Lotus, and in 1978, the John W. Campbell [now renamed Astounding] Award for Best New Writer) are outdated and useless.

But his lessons on how to write remain pretty much timeless, especially when you are actually learning the craft rather than trying to promote a social position, attitude, or bias (I say that knowing that all stories contain the biases of their authors, but lately, it’s gotten so much more obvious and even blatant).

Card won his awards in the 1980s, and given that he is politically conservative and a member of the Church of Jesus Christ of Latter Day Saints, it seems unlikely he’ll ever be nominated again.

Oh he’s still writing and editing, but that won’t make a difference. To find out more, visit his official website.

He’s one of the “Stale, pale male crowd” Campbell…uh, Astounding and Hugo award winning author Jeannette Ng alternately laments about and criticizes. That’s probably because he doesn’t represent the way of considering SF/F as does she and her contemporaries among the “disadvantaged voices” in the industry.

In fact, there was an effort to boycott the 2013 film Ender’s Game, which was based on Card’s novel, because of his “anti-gay” views.

Card responded in an interview with Entertainment Weekly, which was also picked up by Wired, but it didn’t go well. Like Robert Silverberg’s response to allegations of racism, a combination of the author’s expression of his own opinions, and already being judged by the court of public opinion had convicted them both.

Flawed human beings? Aren’t we all (yes, all…stop reading, go look in the mirror, summon up your worst faults to haunt you from your reflection, and then come back…I’ll wait)?

Yet, I still love “Ender’s Game” and re-read it once every so many years. One of my sons, and one of the most politically and socially liberal members of my family, also loves the novel. He’s quite aware of Card’s background, and chooses to overlook or ignore it for the sheer love of reading the book (He also grew up with a lot of Mormon friends, since we live in Idaho). People can do that, you know.

In 2000, Card granted an interview at Writing-World.com where he discussed, among other topics, the importance of religion and spirituality in worldbuilding.

I’ve had people tell me point blank that religion does not belong in science fiction at all, ever. And yet, intelligent beings are not only thinkers, builders, and feelers, they’re believers. Look, the religion doesn’t have to be one you’re familiar with, but if you imagine a bunch of aliens out there who are devoted to an ideal personified in a god or gods, wouldn’t it make them more interesting than if they just worshiped themselves as the highest form of intellect and morality in the universe (some people right here on Earth do that)?

Whatever your criticisms (if you have any) about Card, in re-reading his book, it is exceptionally apparent that he does know how to write, how to craft a premise, build a world, create living breathing characters, and weave all of that together to tell an interesting, entertaining story. His religious beliefs and attitudes aside, he still has much to teach.

To the best of my knowledge, he doesn’t eat cute kittens for breakfast or sex traffic two-year-old boys and girls, so there is that. Maybe the worst thing he’s guilty of is being different and yes, having uncomfortable and unpopular opinions based on his religious and spiritual understanding of things like relationships and marriage. Yes, some people find that offensive.

Some years ago, I read James P. Hogan’s novel Inherit the Stars and found it very enjoyable. It wasn’t until more recently that I found out Hogan held some pretty deplorable attitudes and opinions, including being a Holocaust denier (my wife and children are Jewish, so I take that sort of thing personally).

But I still remember the novel as being very good and I may even re-read it someday.

I started reading science fiction around the age of ten or eleven. It never occurred to me to find out about the people writing those books. I was reading for personal enjoyment, not to glom onto every single, knowable detail of the writer’s life the way teenage girls consumed information about John, Paul, George, and Ringo (The Beatles in case you didn’t get the reference) back when I was a kid.

Thanks to the internet (it didn’t exist in the 1960s when I was growing up), that information is much easier to come by, but I still didn’t know anything about H.P. Lovecraft and his racism until very recently. I’ll probably still read some of his tales from time to time, because I choose to care about his writing and not about him (and he died in 1937).

Sure, I’ll draw the line somewhere depending on the “sin” the author has been found guilty of, but I have a much greater tolerance and ability to separate the writer from their works. I’ve read and reviewed Annalee Newitz’s Anonymous, The Collapsing Empire by John Scalzi, and The Fifth Season by N.K. Jemisin, among many others, and while I’m sure these people and I would disagree on a great many things (Jemisin even blocked me on twitter based on a single sentence I put in my review…well, that’s my best guess), it doesn’t mean I didn’t like their writing or thought their books were bad. It doesn’t even mean I thought they were bad human beings.

Imagine a world where everyone is flawed, and even our heroes and predecessors are imperfect, and sometimes even dead wrong about some value or belief we hold passionately dear. Also imagine that as writers and artists, they are breathtakingly talented and were willing to teach you all they know about the craft free of charge. Would you go for the deal?

For me, maybe so and maybe not. Depends on how I thought we’d get along, because teaching is more than about the bland imparting of information. I’d like to get to know them first, not the stuff you read on the web, but over coffee or a beer. Who is the person as…well, a person? I mean a person rather than a stereotype or how you might imagine them based on shallow perceptions, biases, and assumptions (I promise that when I say “I’m a Christian,” the vast majority of people reading this essay will make assumptions about me that are totally wrong just because of biases, good or bad).

So in the name of Orson Scott Card (who doesn’t know I exist) and all of the old, white men who might still have something positive to contribute to this really strange world we are now living in, I’d like to ask that, the next time you talented young, diverse, “marginalized voices” get together to discuss the realm of science fiction and fantasy, you won’t mind pulling out a chair or two for us as well. Maybe we’re not evil just because we’re different from you. You’ll never know until you actually talk to us, and to be fair, we won’t know about you, the real you (not the social media you) until we also listen.

All that said, we still might end up not liking each other, but you never know.

6 thoughts on “Tolerance, Intolerance, and the World of the “Stale, Pale Male Crowd””