I finally got around to watching Blade Runner 2049 (2017) last night on DVD. At 2 hours and 44 minutes long, I felt it was too long. Yes, there was a story to tell, and it’s a good story, but if this is the theatrical version, then the studio allowed director Denis Villeneuve to indulge himself.

I’ve never seen the theatrical version of Blade Runner (1982), only the Director’s Cut which I reviewed here. It’s considered the better of the two 1980s films, so I probably will never get around to seeing the original.

Since this movie is four years old, I’m not really worried about revealing spoilers, but if you’ve never seen it and want to at some point, stop reading here.

It’s about thirty years after the first film. Replicants from that era have stopped being made and the original company that produced them went bankrupt. A new group of replicants has been created, ones that flawlessly obey. Their wealthy manufacturer Niander Wallace (creepily played by Jared Leto) wants to make more, but there’s only one way to do that (I’m coming to that). 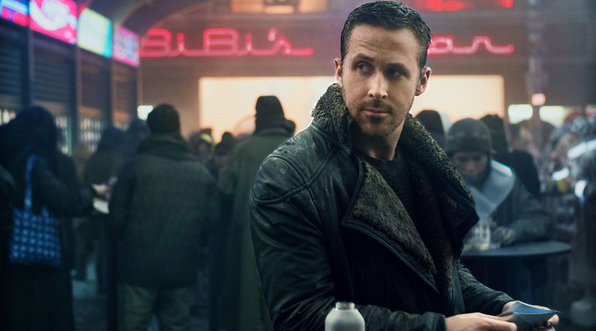 Ryan Gosling plays L.A. police detective “K” a replicant, working for a human police Lieutenant Joshi (Robin Wright). K hunts down older replicants with an unlimited life span. One is Sapper Morton (Dave Bautista) who is living as a protein (bug) farmer. After a fight, an investigation of the farm turns up a military crate buried under a dead tree. It contains the bones of a replicant woman, and the coroner Coco (David Dastmalchian) turns up evidence that she died in childbirth.

Yes, a replicant that can give birth, which is the secret Wallace is looking for, an unlimited supply of self-replicating replicants.

Joshi orders K to bury all evidence of this but he decides to pursue it. Somewhere in his investigation, he believes he is the born replicant, although there’s evidence that it could either have been a boy or a girl.

Harrison Ford as Rick Deckard in the film Blade Runner (1982)

In the original “Blade Runner,” we see the enslaved replicants through the eyes of the human detective assigned to hunt them down. In this movie, we see things from the slave’s (K’s) point of view.

In what I can only consider irony, K has a holographic companion Joi (Ana de Armas and who I just loved as a character) who is more or less integrated into his trashy apartment (this being a dystopian epic, everything is trashy). She’s an AI program who is either designed to “love” K or, as in so many other science fictions stories, becomes sapient and actually does feel. The movie implies the latter, but objectively there would be no way to tell.

He does buy her an upgrade, a mobile storage/holographic unit so he can take her with him. So the slave has a slave.

In one scene, three young prostitutes come on to K. Realizing he’s a replicant and blade runner, two leave, but Mariette (Mackenzie Davis) stays and flirts (“You don’t like real girls, do you?”).

At one point, Joi hires Mariette for K. She overlays her 3D image onto Mariette’s body so he can simulate having sex with Joi.

I have to complement the actors playing replicants. For most of the movie, they really do show very little emotion, which makes K’s outburst when he finds out he has real memories of childhood more potent.

As I’m sure you’ve guessed by now, Rachael (Sean Young in the original movie) was the mother of Deckard’s child.

After K fails his baseline test when he believes he’s a born replicant, he’s got 48 hours to get it together or be executed. It’s at that part of the film when Joi decides to make love to K, which seemed like very poor timing. Afterward, Mariette places a tracker in K’s clothing, making us believe she either works for the police or Wallace.

When K decides to leave his place, he knows he’s never coming back, so Joi convinces him to fully download her into the portable device. He warns her that if it is damaged, she’s gone forever (heavy foreshadowing).

While trying to uncover his past, K travels to San Diego, which is basically a big, big junkyard, and after being shot down by well armed scavengers (I wonder how all that happened?), is rescued from his attackers by Luv who is remotely directing artillery fire against the assailants.

K finds a factory of children taking junk and making cheap electronics from them. Presumably they’re all human, which makes the movie’s theme of slavery even more gruesome. Interestingly enough, there were no significant black characters in the movie except for Doc Badger (Barkhad Abdi) and the Fagan-like Mister Cotton played by Lennie James. Cotton is the only adult over these children and even as K fails to find the records he’s looking for, he also doesn’t do anything about reporting Cotton’s operation and freeing hundreds of enslaved boys and girls.

K discovers Deckard hiding alone (well, with a dog) in what I can only assume is Las Vegas, mainly because of all the casinos plus the hologram of an Elvis Presley performance from the early 1970s.

Luv and her gang of thugs finds them, beats K to snot, breaks Joi’s storage device right in front of him destroying her program forever, then kidnaps Deckard with the idea of tracking down the born replicant.

That’s a neat trick since Deckard deliberately made sure he would have no idea who his child is or where it went. However, he does know the name of the person who has that information, Freysa (Hiam Abbass). 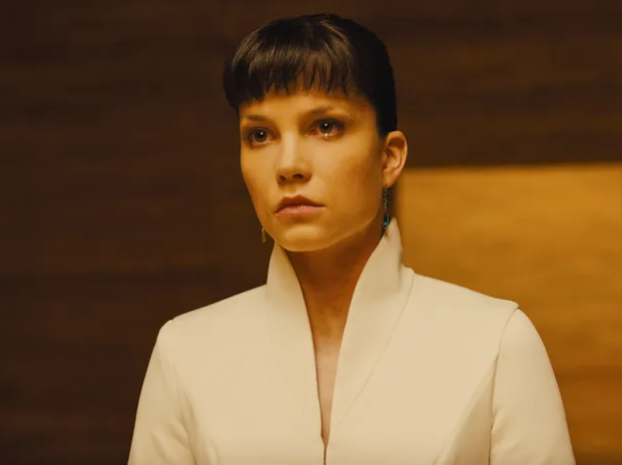 Sylvia Hoeks as “Luv” in the film Blade Runner 2049

In the process of tracking K down, Luv kills Lt. Joshi just as she earlier murdered Coco when he caught her stealing the replicant’s bones.

Wallace and Luv “torture” Deckard, not the usual way, but by presenting him with a duplicate of the late Rachael. When Deckard rejects her saying that Rachael had green eyes, Luv shoots and kills her.

In this film, Rachael is credited as being played by Sean Young but her performance double is Loren Peta.

I should also say that Edward James Olmos reprises his role as Gaff in one scene where he’s interviewed by K, even making one of his signature origami animals.

Meanwhile, K is rescued by Mariette, Freysa, and her group who were responsible for caring for Deckard’s child, and is tasked with killing Deckard before he can lead Luv to Freysa and thus to the born replicant.

For some odd reason, Luv has to take Deckard to a different location to extract the information, which gives K the opportunity to kill him. He makes a different call, and he shoots down Luv’s craft in the Pacific, kills Luv, and rescues Deckard.

By now, K knows he’s not the child, but in the battle, he’s sustained several serious wounds. He leads Deckard to the building where he can find his daughter, then lays down on the steps alone, presumably to die in the snow.

Although Ford’s portrayal of Deckard brings the story full circle, the story could probably have been told without him. In fact, the marketing for the film states that you don’t have to see the first movie in order to enjoy this one. I do have an attachment to Ford’s roles as Indiana Jones and Han Solo, but not so much Deckard, so I really didn’t care what happened to him. Also, the way he played Deckard, he could just as easily have been an old, burnt out Jones or Solo. 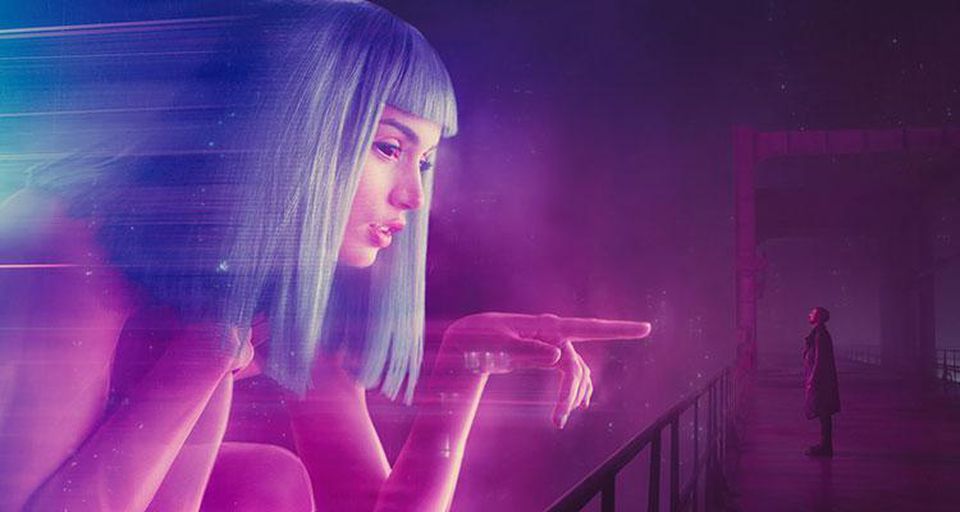 There are some particularly troubling (and unnecessary) scenes, such as Wallace murdering a newly created female replicant with a scalpel and several scenes with gigantic nude female holograms, one that looks like Joi (probably the same production model) and who “flirts” with K shortly after his Joi has been destroyed.

While Leto’s portrayal of Wallace is masterfully macabre, he’s essentially a two-dimensional bad guy with no redeeming qualities and not really very interesting. Hoeks as Luv was more compelling because she managed to show just a hint of feeling under various circumstances while otherwise deadpan. She, like K, in the end, do express desperate rage as K is drowning her.

It was nice to see Bautista play something besides his “Guardians of the Galaxy” character, and his “farmer” seemed gentle and understated. That is until K tried to “take him in.”

Coco was about as “normal” a role as I’ve ever seen Dastmalchian (“The Dark Knight,” “Ant-Man”) play and I really appreciated it.

I’m sure “Blade Runner” fans appreciated seeing Olmos play Gaff again, but like other parts of the film, the scene could have been removed without changing anything about the story.

Harrison Ford as “Rick Deckard” in the film Blade Runner 2049

Obviously a lot of thought, talent, and money was expended on this sequel, and it is a very good film. However, as I said, it was way too long for the tale it was trying to relate, and except for the fact that old and presumably new replicants can give birth, at the end, the world is no different than when it started. K probably dies, the born female replicant is disabled in a way that won’t allow her to move among other people, and Wallace is still there continuing to make a race of slaves in a garbage heap called Earth.

I’m glad I watched the film, but it won’t be on my list of “repeats.” Heavy on the depression and once is enough.

Oh, I forgot. After reading this review of the movie, I remembered that Deckard was supposed to be a replicant, too.