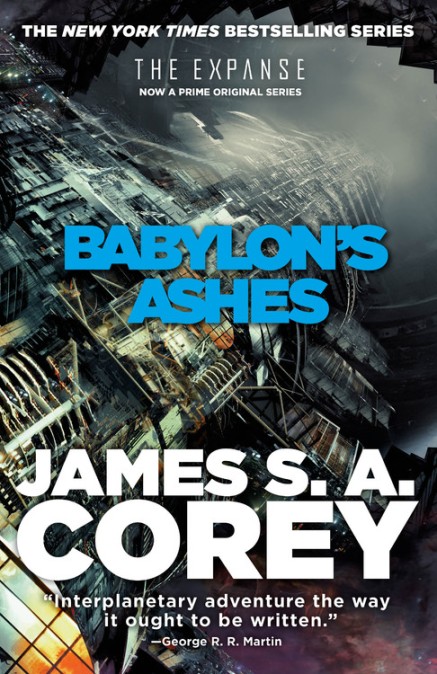 Just finished James S.A. Corey’s (really Daniel Abraham and Ty Franck) book Babylon’s Ashes, the sixth in the Expanse series, and I’m still enjoying it. I can tell though, that it’s influenced by the television counterpart since the tales are becoming increasingly episodic.

For instance, this one picks up pretty much where Nemesis Games left off, though mercifully, Jim Holden and the gang, which now includes both Bobbie Draper and Clarissa “Peaches” Mao, are back on board the Rocinante. Earth is an all but unlivable mess after Marco Inaros (although his kid Filip takes credit for it) threw a few “rocks” on it, Mars has been dropped from the terraforming project like a proverbial hot potato, and the so-called “Free Navy” itself are acting more like a bunch of pirates, hijacking ships and cargo headed for the ring and the colony worlds on the other side.

A few things stood out that the authors may not have intended to be noticed. I realize that “representation” is a big deal in the entertainment industry right now. The TV show Supergirl introduced a trans character, The Eternals has the MCU’s first openly LGBTQ character (I wonder how Jack Kirby would have felt about that one?), and just a ton of formerly straight superheroes have been retconned gay, bi, or otherwise LGBTQ.

The Expanse series has its fair share of gay characters as well, which is fine and good since in any population, some LGBTQ people will exist. I kind of wonder if I ever started to count the levels of occurrence in this book series or in any other work of fiction, if the level would exceed real life statistical estimates.

Also, Jim Holden isn’t the only one who was raised by multiple parents in a group marriage. Turns out Belter ship Captain Michio Pa’s crew are also her spouses. Such marriage groups aren’t common in most western nations, although you can find a few on present day Earth. I wonder what Abraham and Franck have in mind by highlighting them? Is it just to make social relationships seem more “futuristic?” Maybe it’s the same reason why Reverend Anna Volovodov’s take on Christianity seems somewhat alien compared to current practices and theology.

I was reminded of a book I’d read decades ago called The Harrad Experiment written by Robert H. Rimmer (made into a movie in 1973) about premarital, communal relationships, but then that’s an experiment. Human nature being what it is, I don’t see it being all that successful in real life, aside from exceptions I found (and many of them are historical).

Of course, science fiction has long been used to present commentaries on culture and society, so there could be some of that in here. For instance, in her musings, Chrisjen Avasarala uttered, “If there hadn’t been so many fucking human beings stressing the food webs over the last few centuries, the system might have been more robust.”

Bill Gates was allegedly, and wrongfully, quoted as saying relative to overpopulation that “at least three billion people need to die.” While that statement was made by someone named Dr. Robert O. Young, fact checked and found to be false by Reuters, the issue of human overpopulation has been discussed for centuries. It’s okay to use science fiction to comment on the human condition, but when the reader (me) catches you lecturing, it takes all of the air out of the argument.

This is just a minor dig, but I noticed that at least on three separate occasions, various characters suddenly lost their appetites for various emotional reasons. You never see anyone binge eating because they’re upset.

With Earth pretty much unlivable and with millions dying everyday, I can see why there would be a rush to get through the ring and find (hopefully) livable colony planets on the other side. But as we discovered in Cibola Burn, those alien planets aren’t necessarily very friendly to people.

Also, as Michio Pa discovered, without Earth, everyone in the belt and probably any human colony in our solar system will be pretty much doomed in a matter of years. Like it or not, human beings are designed to live on Earth and without a lot of creativity (or creative fiction), they probably won’t be able to permanently live anyplace else.

Inaros and his band of miscreants doomed the belt including themselves by “throwing rocks at” Earth. It did just the opposite of what they wanted. The belt didn’t become a free entity, but a lost cause. Yet almost no one saw that right off the bat and it was hardly mentioned in this book.

Given that colonizing a planet in another part of the galaxy is a huge toss of the dice, and since there was already a terraforming project in progress on Mars, I’m surprised more people on Earth didn’t move there and ramp the project up into high gear. Earth will eventually recover, even if it takes centuries, and it’s still humanity’s best bet for long term survival. There are already people living on Luna too, although I’m not clear if it is a self-sustaining colony (or if Mars is for that matter). I’m just surprised we didn’t find a group of people who chose that option.

The book does offer us more about how the ring is “eating” ships, and Naomi figures out at least enough of the pattern to set a trap for Inaros and his Free Navy fleet. People assume Inaros is dead but all we know is that those spaceships disappeared. I suspect he’ll return at some point.

I’ve already mentioned the return of Bobbie and Clarissa, we see Anna and her family in the framing sequences at the beginning and end of the book, and Avasarala and Praxidike Meng make significant appearances.

Unfortunately, like Miller, we also lose Fred Johnson in this novel, leaving it up to Holden to forge an alliance with disaffected members of the belt.

Like Clarissa before him, I started out hating Filip, but then saw that he had begun to redeem himself near the end of the book (although his fate remains a mystery). That said, although Clarissa’s crimes were truly heinous and no one could blame Holden for not trusting her, I can’t see how Filip will ever truly be a sympathetic character after murdering billions of people on Earth.

The dilemma of the belters is solved in a rather unique way by Avasarala, and Holden shows a few smarts by turning down the job she offered him. I suppose we’ll find out in book seven Persepolis Rising how that all works out. I’ll have to read it and see.

I was disappointed to find we still don’t know who (or what) took the sample of the protomolecule from Johnson’s safe. 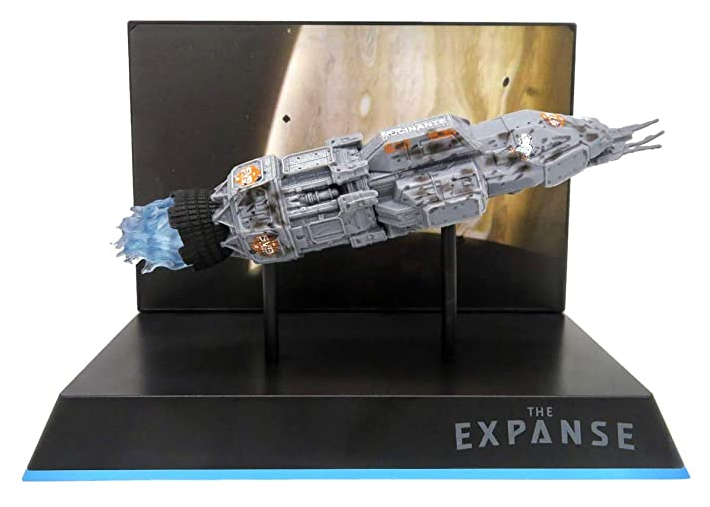 Model of the spaceship Rocinante.

Oh, I found out there’s a model of the Rocinante available. Imagine that.