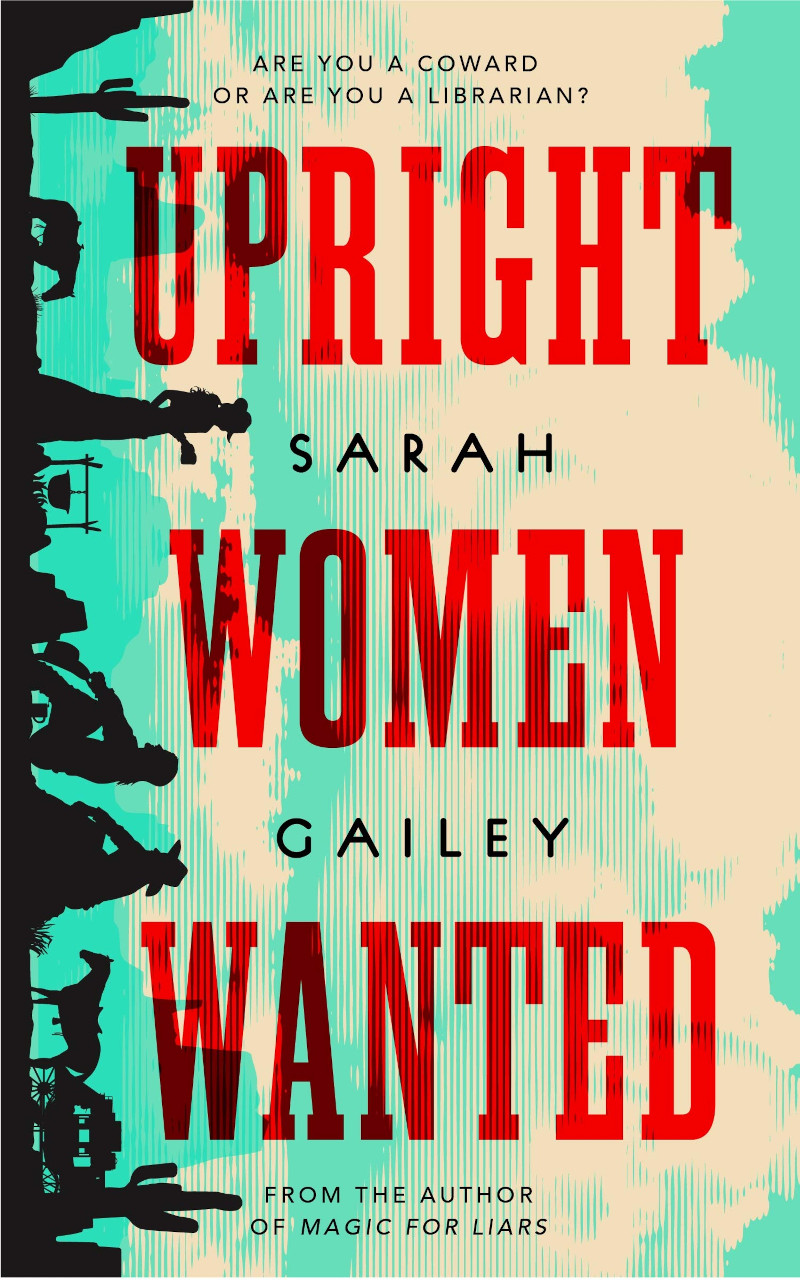 Upright Women Wanted by Sarah Gailey isn’t the sort of book that I’d usually read. It’s not the sort of book I’d even be slightly interested in buying. But, like books I’ve read before, it was a free download (until Dec 17th) from Tor.com.

I thought I’d given up reading Tor books if, for no other reason, that all the ones I’ve taken a look at seem to have been written for other audiences, written by people who would hate my guts if they knew me, or both.

But the description was interesting enough:

“That girl’s got more wrong notions than a barn owl’s got mean looks.”

Esther is a stowaway. She’s hidden herself away in the Librarian’s book wagon in an attempt to escape the marriage her father has arranged for her—a marriage to the man who was previously engaged to her best friend.

Her best friend who she was in love with.

Her best friend who was just executed for possession of resistance propaganda.

The future American Southwest is full of bandits, fascists, and queer librarian spies on horseback trying to do the right thing.

(I should mention that Tor allows free downloads as marketing for newer books the author is trying to sell).

Like I said, not the sort of book I’d be remotely interested in, but I wanted to see how (or if) the author was going to pull it off.

It’s a little like a “western Star Wars,” but the Empire is all male and disseminating propaganda supporting the “State” and “war,” while the Rebel Alliance are (almost) all women, and as far as I can tell, all LGBTQ+. Really, it’s that simple. That’s the entire premise in a nutshell. In the guise of itinerant librarians passing out “approved materials” to towns and villages in the American Southwest, they smuggle “unapproved materials” as well as contraband to “the resistance.”

“A good old-fashioned horse opera for the 22nd century. Gunslinger librarians of the apocalypse are on a mission to spread public health, decency, and the revolution.”—Charles Stross

To the author’s credit, she (no pronouns stated, so I’ll have to go with the standard) they (I found out later from the author’s twitter profile that the author’s pronouns are “They/them”) are a good writer. That said, the story was less dystopian future and more fantasy with a little farce swirled in.

Esther ran away from home, hiding in a librarian’s wagon. Her best friend and female lover was executed for possessing unauthorized materials (probably anti-state propaganda) and her Father had arranged a marriage with her friend’s former male fiancé.

This apparently teenage girl believes her attraction to women is wrong, and because librarians are supposed to be morally upright, she hopes they’ll help her purge her feelings.

She doesn’t realize that the two head librarians Bet and Leda are lovers and that all the other women she encounters are queer.

This is sort of a “coming of age” tale, except the backdrop is a futuristic hell where the primary technology is 19th century (we don’t know why), that the State is waging some kind of war, that there are mainly soldiers in the Midwest, and really, a collection of other details that very incompletely defines this world. The author provides no clue how the nation and the world came to this point.

There were a few quotes I want to point out. A young apprentice librarian Cye tells Esther, “I’m ‘they’ on the road but ‘she’ in town.”

All law enforcement officers are basically thugs, and “disguised” as bandits, a Sheriff and his mob chase down the librarian wagon in the wilderness. It wasn’t until later that they discover it was because one of their party they’re supposed to get past the checkpoints into Utah, Amity, is an assassin.

Naturally, the librarians kill all six bandits and hide the evidence that they were deputies long enough for them to get away.

When Amity’s crime is discovered, Bet and Leda object, not because she killed a government (supposedly Fascist – as in anyone I disagree with is a Fascist?) official, but because it drew a lot of heat to them, putting their mission at risk.

If this is a resistance, I was waiting to see if it had male members or even if any of the women were straight. This quote is just one example of why I waited in vain.

“…using the warm, quiet voice she’d always relied on to keep men happy. It was a tone that said she wasn’t a threat…”

At one of the checkpoints, both Amity and Bet are spotted (late in the game, we find that Bet is also suspect of whatever the State suspects of women) and there’s a fight. Bet is wounded and the male guards and deputies are killed.

This is Esther’s baptism of fire, so to speak. She is jumped by a deputy who seems like he’d let her go as long as she’d just put down her gun. He full on intends on capturing or killing all of her companions. Even then, she’s hesitant until there’s a distraction and she’s about to watch him kill one of her friends. Then she guns him down.

To be fair, the librarians do seem to have a conscience about the men they’ve killed, even though they all understand that these men deserved it.

The only sympathetic male in the story is the doctor who treats Bet. There’s no explanation why only he’s in the resistance and, given the tone of the book, why he even exists at all. The doctor could have been a woman and it really wouldn’t have changed anything.

The dedication and author’s statement at the end of the book describe their own difficulties which is probably the motivation both for this book and the character Esther:

This isn’t so much a description of the future, but more of a fantasy based on the author addressing their own conflicts. Really, I can’t see how history could get us from where we are now to where Gailey imagined. It would be just as easy, easier in some sense, for the totalitarian future to be Socialist rather than Fascist and the techniques and methods would be pretty much identical (I know the author wouldn’t agree and so won’t a lot of people, but the idea is not without historical precedence).

I know someone is going to say that Gailey is an award-winning author and how dare I, but I’ve been disappointed by award winners and bestselling authors before. It’s sort of my point about how these awards are determined in the modern era, but I’ve belabored that point on other blog posts.

On Amazon, this book costs $10.99 US as I write this. Given everything I’ve written, plus the fact that the page count is a mere 171 (Tor likes to overprice their tiny books), it’s not even mildly attractive. I’m glad the author is feeling success because, as a writer, I’d like that, too. They obviously have an audience, so more power to them. I’m just not one of Gailey’s fans, and the book reads as if they wrote it only for themselves (change in pronouns is making this confusing for someone who learned to read and write in the 1960s) and their community.

Addendum: My much shorter review can be found at Goodreads and Amazon. Plus the author’s twitter account rendered other personal pronouns requiring further edits (and commentary on said-edits).