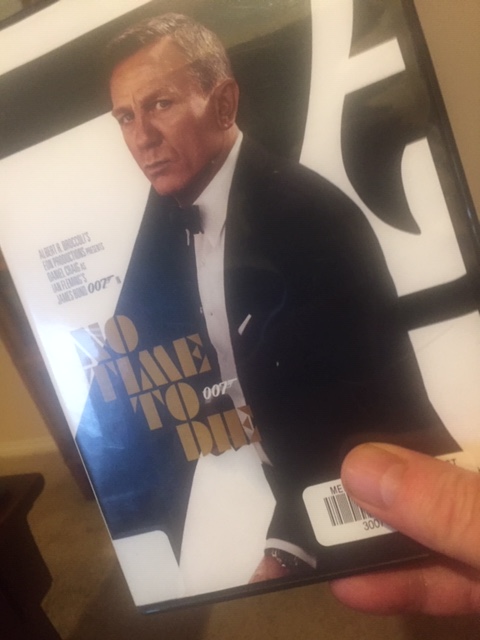 Just finished watching (as I write this) the most recent James Bond/007 film No Time to Die. It pulled quite a bit of time, 2 hours and 45 minutes, out of my life, but in this case it was well worth it.

Just to get this out of the way, during the theatrical release, I recall Lashana Lynch who played Nomi/007 said some rather unpleasant things. I can’t really remember what they were and it doesn’t make any difference at this point. Just for future note, it’s generally important when you’re promoting a film as did Brie Larson and Captain Marvel (2019) as well as Simu Liu and Shang-Chi and the Legend of the Ten Rings, to put on your best attitude in front of the public and press.

The film begins with a young Madeleine Swann (Coline Defaud) and her (drunken) mother Mathilde Bourbin in a lone cabin in a snow covered countryside. They are suddenly beset upon by a masked assassin Lyutsifer Safin (Rami Malek) who is intent on killing Madeleine’s Father. Apparently the Dad was an assassin for Spectre and on their leader Blofeld’s (Christoph Waltz) orders, murdered Safin’s entire family. Finding the Dad not home, he kills the mother but saves Madeleine from dying.

Years later, a grown up Madeleine (Léa Seydoux) has an affair with Bond in Italy. There, Spectre tries to assassinate Bond and the evidence implicates Madeleine as having set him up. He kills or eludes the agents and puts Madeleine on a train saying they’ll never see each other again.

Five years later, a covert biolab in London is attacked and a lethal DNA-based toxin is stolen with the help of a scientist/double-agent Valdo Obruchev (David Dencik).

Most of the action occurs after Bond (Daniel Craig) has retired to Jamaica surrendering his double-oh status. He’s recruited by CIA agent and long time friend Felix Leiter (Jeffrey Wright) and a (supposed) State Department operative Logan Ash (Billy Magnussen). He is to infiltrate Cuba with the help of Paloma (Ana de Armas), liberate Obruchev from a Spectre gathering, and deliver him back to the CIA.

It’s a setup and actually a double-cross. Bond is trapped somehow by Blofeld who is in a maximum security prison in London, and sprayed with a modified sample of the toxin tailored for his DNA. However Obruchev was also working for another power, switched the formula so all of the Spectre agents died instead, leaving Bond and Paloma (and everyone else not belonging to Spectre) unharmed (a neat trick unless all Spectre agents share some sort of genetic characteristic which is unlikely).

007/Nomi is also there on MI6’s behalf trying to capture Obruchev, but Bond gets to him and flies him to some sort of abandoned oceanic oil rig to meet Felix and Ash. There, it’s revealed that Ash is an operative of this mysterious other force. He murders Felix and leaves Bond to drown, taking the scientist with him on Bond’s plane (it was never explained how Ash and Felix got there in the first place unless the platform was mobile).

I won’t go through every single detail, but Bond is eventually reinstated as a double-oh (but not seven) and finds that his long lost lover is the only one Blofeld will talk with (she’s now a psychiatrist). Secretly, Safin, claiming a life debt (and hinting that there is someone she loves he could threaten), recruits Madeleine to kill Blofeld with the DNA toxin. Once it touches you, it’s with you forever. You won’t be harmed, but if you touch anyone carrying the DNA traits that trigger the toxin, they will die.

Madeleine can’t go through with killing Blofeld but Bond touches her hands as she leaves. During the interrogation, Bond grabs Blofeld, accidentally killing him.

Investigating the plot, it’s discovered that Safin isn’t satisfied with destroying Spectre in revenge. He plans to mass produce the toxin to kill millions. Given the right formula, the toxin can be tailored to murder entire ethnic groups, so no one is safe. The film doesn’t make it clear (and it had plenty of time to do so) exactly who are Safin’s targets and why he wants them dead.

In tracing down Madeleine, Bond discovers that she has a young daughter Mathilde (Lisa-Dorah Sonnet).

Nomi is supposed to be tracking Ash but the trail leads right to Madeleine’s home. Ash is after Madeleine. Bond tries to get them out and the body count climbs. Unfortunately, while Ash dies, Safin kidnaps Madeleine and Mathilde taking him to the “poison island” where Safin was raised (Daddy was not a nice man). That’s where the toxin factory is, in disputed waters between Japan and Russia.

By now Bond and Nomi are on somewhat more friendly terms and together go after Madeleine on the island.

Bond and Nomi sneak onto the island in what amounts to a flying submarine, but they don’t have enough explosives to destroy that much chemical. Nomi finally gets rid of Obruchev by dumping him into a toxic pool, and Bond nearly rescues who he believes to be his daughter from Safin, but misses. Madeleine, who from a young age was taught mad survival skills by her Dad, escapes and joins Bond.

A British Naval strike will destroy everything, but the blast doors protecting the facility must be opened.

With Mathilde rescued (she dropped her dolly and when Safin wouldn’t look for it, she bit him, resulting in him turning her loose alone in the complex where Mom and Bond find her), off she and her Mom go with Nomi in the sub while Bond stays behind to open the doors. Everyone else was evacuated when both Russian and Japanese military aircraft and ships approach the island.

Of course after Bond kills a ton of guards and opens the doors, as he’s about to leave, they start closing again thanks to Safin. There’s a showdown between Bond and Safin. Bond is shot several times and in the struggle, is poisoned with the toxin that will kill Madeleine and her child. He can never go near them again.

Killing Safin, he manages to open the doors again now that the missiles have been launched, but there’s no time to get away. He’s severely wounded and wouldn’t be able to rejoin the woman and child he loves.

The missiles strike and the island stronghold is destroyed along with James.

This movie has everything you’d expect from the franchise, James Bond action, drama, a bit of humor, and Bond’s gadgets and gadget-laden car thanks to Q (Ben Whishaw). M (Ralph Fiennes) even eulogizes Bond with a famous quote from Jack London.

Bond himself is more mature than the way he’s previously been played. He’s retired. If he could have been with Madeleine, he would have settled down with a wife and daughter. But that was never meant to be.

It’s hard to not shed a tear when, at the end of the movie, Madeleine starts telling a story to Mathilde about a man. His name was Bond, James Bond.

The movie is time well spent and a fitting conclusion to the life of a now more seasoned James Bond. So long, 007.