What disturbs me more is the whole concept of purpose as applied to any literature. To the Marxists, intent upon subordinating everything to the good of the state, the arts must serve a direct purpose of life — usually propaganda, I’m afraid. But why people in this country accept such Marxist ideas is a puzzle.

–Lester Del Rey as quoted from The World of Science Fiction, 1926-1976: The History of a Subculture

I suppose it’s a mild coincidence that I’m quoting Del Rey on his birthday. These words from his tome, which I reviewed HERE and HERE, are predictive of the world of science fiction (and entertainment in general) we experience today.

Del Rey saw SciFi as a lot of things, including instructive, but most of all, he believed it should be fun.

But where has the fun gone?

And the three men I admire most
The Father, Son, and the Holy Ghost
They caught the last train for the coast
The day the music died
And they were singing bye-bye, Miss American Pie
Drove my Chevy to the levee but the levee was dry
And them good old boys were drinking whiskey and rye
Singing, “This’ll be the day that I die”
This will be the day that I die

Just substitute “escapism” or “fun” for the word “music” above, and it fits. There’s a lot inspiring this missive, including this recent one.

I’ve been following the big racist flap involving Moses Ingram who plays Third Sister in the Star Wars TV show Obi-Wan Kenobi. I’ve been trying to understand who did this and why, but it’s beyond me. I’ve even considered that “Star Wars” engineered the whole thing just to create buzz for their show (see the image to the right for an example).

There are commentaries that criticism of Ingram’s acting and the role itself, although not mentioning race at all, is indeed racist because a similar character who is white did not receive similar criticism. Furthermore, since Ingram is such as good actress, it seems that any criticism of her acting ability must be racist. I don’t follow the logic, but maybe that’s “racist,” too.

All this has basically pulled all Star Wars fans who are not people of color into the racist category (including the vast majority of us who aren’t) and it’s disheartening. I haven’t seen this show and I probably won’t, so I can’t render an objective opinion. I guess it wouldn’t matter because even if I had legitimate criticisms of the show in general and actress Ingram or her Third Sister character in particular, Star Wars would get Ewan McGregor to make another video or something.

Yes, to the degree that anyone called out Ingram for being black, used the “N” word, or so many other terrible actions that are aimed not at her ability or the character she plays, but at her race, we should and will object and defend.

But it’s gone far beyond that.

I should mention as an aside that Star Wars and Disney have absolutely no right to claim the moral high ground after the way they treated John Boyega including how they minimized or deleted his image in their promotional material to China. Disney/Marvel did the same thing to the late Chadwick Boseman and Black Panther. 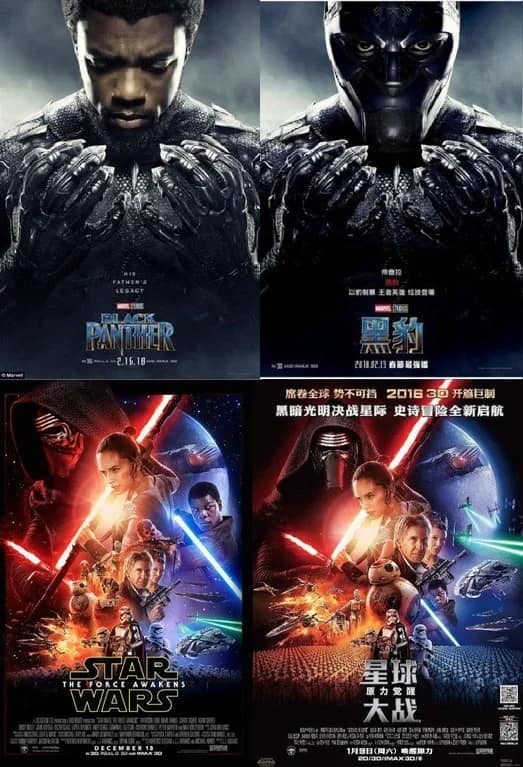 Images of how promotional posters minimize POC for China

The same thing is happening in the world of Star Trek or what’s now being called NuTrek. Certain episodes or even whole seasons of Star Trek: Picard and Star Trek: Discovery have been criticized, even by fans who otherwise love NuTrek (as opposed to old school fans like me). However, the message from producers and showrunners is “love our shows otherwise your are haters” or something to that effect.

To be clear, on DVD, I did watch the first seasons of both “Picard” and “Discovery,” reviews of which can be found on my blog using the search feature.

I do understand that Star Trek: Strange New Worlds is doing a bit better so far, especially in attempting to write tales that aren’t wholly dependent on representation and social justice themes (and dissing fans who just want good writing), so I’m cautiously optimistic.

As I mentioned, I don’t subscribe to streaming services, so I can’t watch these shows, even if I wanted to, and right now, I have no desire for any of them. I have been watching a YouTube reviewer who is knowledgeable and funny, but of late, I can’t even be bothered by them.

We talk a lot about toxic fandom and to be sure, that’s definitely a thing. But what about toxic creators? There seems to be an endless stream of them, and that’s what makes it difficult for me to care about any of them and what they do.

On twitter, I follow a conservative comic book and science fiction platform Bounding Into Comics. Articles are written by a variety of folks, some of which I’m not fond of, but it does give me an insight into the “toxic creator” crowd.

For instance, and speaking of Star Wars, Film Scooper And YouTuber Grace Randolph Defames Terror On The Prairie Actress Gina Carano. The treatment of Ingram vs. Carano by Star Wars/Disney has been brought up by comparison, and Randolph took exception to that, calling Carano anti-Semitic and anti-trans. I looked at Carano’s tweets relative to this and I don’t think the labels fit. They were created to dismiss her from the Mandalorian because she’s politically conservative.

In other words, it’s not who you are or how talented you are, it’s what people think about your politics. That’s the core difference between why Ingram is being defended by the studio while they threw Carano to the proverbial wolves.

Anywhere a fan of Star Trek and Star Wars turns, a fan like me anyway, the message from producers, showrunners, and the cast is “Believe as we believe or you’re not a true fan.” I don’t support racism to be sure, but does that mean I have to agree with all these people on every single topic without fail?

I just cringe at being ordered, commanded, told, “politely and respectfully asked” to consider their point of view (I’m sure you noted the sarcasm).

This is probably social media’s fault, well, how people and organizations use social media to instantaneously express their opinions and raw emotions onto a wide international audience.

I was commenting to my son that it really is unfair for people to judge a new TV show by two, three, or four episodes and say on social media that if the show doesn’t improve after that, they’re done with it.

The original Star Trek had three very uneven seasons, the third being pretty bad with a few exceptions. Star Trek: The Next Generation, Deep Space Nine, and Voyager all had rough starts taking several seasons to get any traction. If twitter had existed in the 1960s, 70s, 80s, or 90s, all of our now “beloved” Star Treks would have been raked over the coals. Admittedly, anything new has to pass through a gauntlet every week, so I can see how the producers/creators might have become defensive and aggressive.

But then again, in the “good old days,” none of the creators were pounding on the fans to “love us or else you’re a [bad name],” either. I guess both “sides” have their points and faults.

I know that Boyega and Kelly Marie Tran were treated badly by some of the fans, and I have no idea why. Then again, as I mentioned before, Lucasfilm and Disney didn’t exactly help either. Maybe their response to Ingram is their trying to make up for past sins. I don’t know. 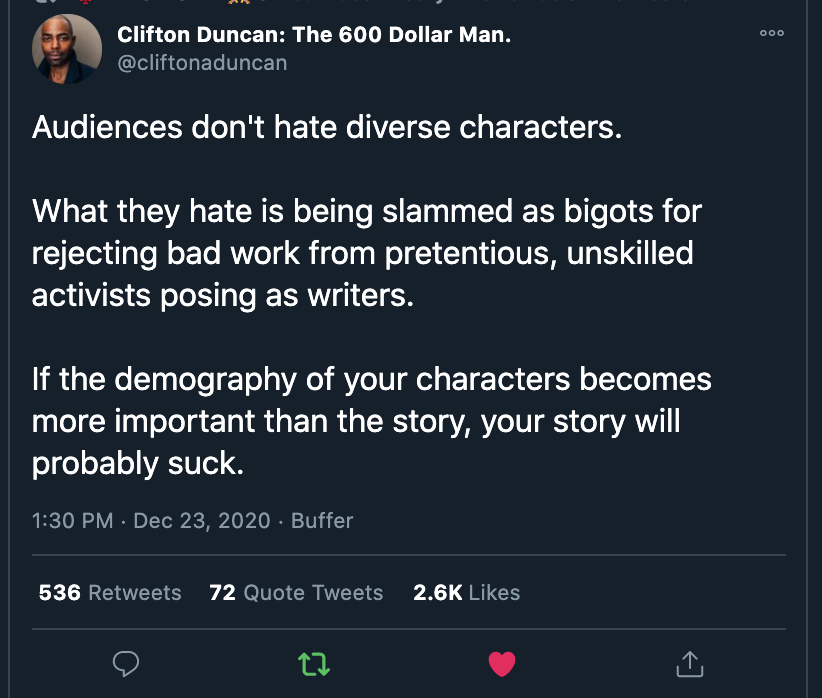 A meme from the internet

I do know that the majority of the fans are caught in the middle of all this. As much as because of the bad writing and the all too obvious attempts to mold my consciousness into compliance, this is why I’ve given up on modern Star Wars and Star Trek. Even if they started producing quality content, the attitudes of the people behind them toward me as “the other” and not being “them” sucks the enjoyment out of everything they do (assuming it’s enjoyable to begin with).

Somewhere on twitter, I quipped “LMEFA” = “Let’s Make Escapism Fun Again.” The real world sucks, a large part of it anyway. I watch or read escapism to escape. No mystery there. I’ve found either older SFF or indie SFF to be viable alternatives since both knew or know how to write stories that are fun, entertaining, engaging, and most of all, without endless lecturing, plus no commentaries from the writers on how much you suck if you don’t love them and their “message.”

Yes, I’m ranting. This is my blog. I’m allowed to rant here. I forgot, here’s another example.

You (I) don’t have to be racist, anti-trans, anti-LBGTQ, anti-anything else to be sick and tired of being lectured to, that you’re on the wrong side of history, that you aren’t one of the cool kids, on and on, yada, yada, yada.

Let me know when you want to make escapism fun again. In the meantime, I’ll be hanging out in the latter part of the twentieth century or with my indie SFF writers and readers having a good time and trying to shed all this modern crud like a sea mammal covered in an oil spill. Yes, “wokeness” and “hating fans” is the oil spill.

When you’re ready to join me, we can make escapism fun again together.

3 thoughts on “Mourning the Loss of Escapism”