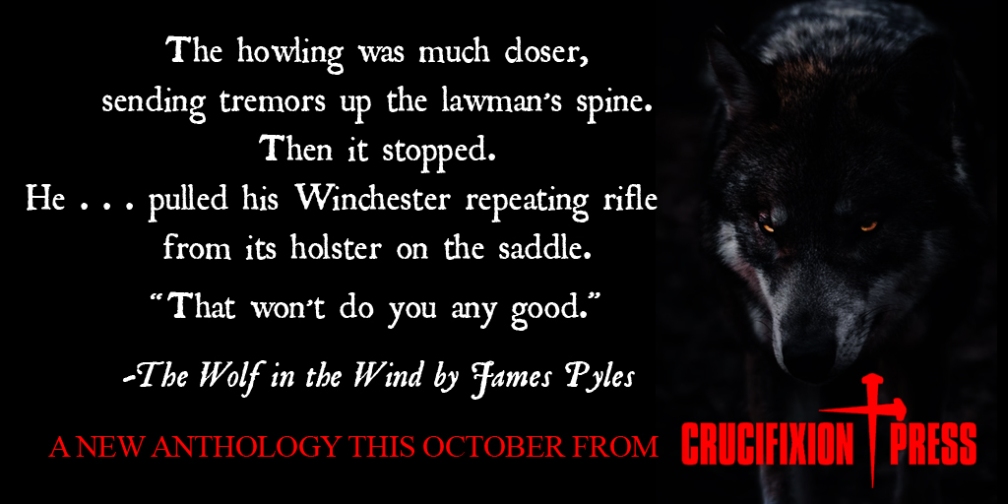 My short story “Wolf in the Wind” was accepted some months ago for a new anthology, but it won’t see the light of day (so to speak) until October. Until then, here’s a small taste.

Thornton was working on his third glass of redeye, sitting alone at a table, in the equally empty Maloney and Cullen Saloon. Shamus Maloney had gone home over an hour ago figuring the Sheriff was there more to take care of his lone guest in the first room at the top of the stairs. He lifted the bottle to top off his drink when two things happened. The first was that the clock over the front door chimed three. The other was that E.E. Durbin let loose a bloodcurdling scream, sending Bobby Bill tumbling out of his chair, knocking it over, along with his perfectly good bottle of hooch.

“Ah, shit,” he swore, scrambling to his feet, and then running into a table and two more chairs before his soiled boots clumped up the stairs, taking them two at a time.

He tried the door, but it was locked. The screaming had stopped, but he could hear her sobbing. “Durbin, open up the God damn…aw, Hell.” He took a step back, driving his left heel onto the floor, and then raising up his right leg, slamming his foot just below the doorknob.

The door was sturdy, but the frame around the lock had some dry rot and splintered. The door sailed inward, bounced back, nearly catching the Sheriff in the face, before swinging inside again.

“Durbin, what in the world did you yell out…?” He took two steps forward into the darkness and froze. “God, Jesus Almighty,” he whispered. His hands were trembling, and even if they weren’t, he didn’t think he could trust himself to reach for his iron. Then again, what was he going to shoot her for, unless maybe for witchcraft, which might be a sin but maybe not a crime.

Coming in October from Crucifixion Press: “Wolf in the Wind,” an E.E. Durbin Occult Detective Story.

Also, be sure to check out my two latest novelettes set in the SciFi 224-Verse, The Fallen Shall Rise and The Haunting of the Ginger’s Regret. Bonus: I’m most of the way through the sequel to “Fallen,” my first novel-length feature.