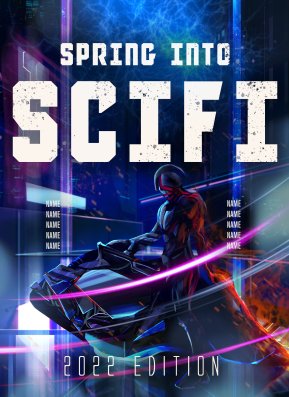 Cover art for the Cloaked Press anthology “Spring Into SciFi 2022”

The accompanying graphic (see below) I received from the publisher gives a slightly different figure, but they tend to float. It also says that this humble, indie SciFi anthology is in very good company.

My short story “Tiamet Descending” is among the tales nestled between the covers.

What is the mystery of the Tiamat and what happened to her passengers and crew? Marine Captain Elisha Rush and five mission experts aboard the military spacecraft Belisama have been sent to rendezvous with Tiamat just inside the orbit of Mars. What they find on board will lead to either a miracle for humanity or our extinction.

For this missive, I finally got to use the design for an interstellar sleeper ship I’ve created and tried to use in other (unpublished) stories, including weapons systems and an unspeakable horror. I also “invented” drones that can fly in a vacuum, inserted (more or less) space zombies into its pages, and included a vast menace waiting for humanity just outside of our solar system. 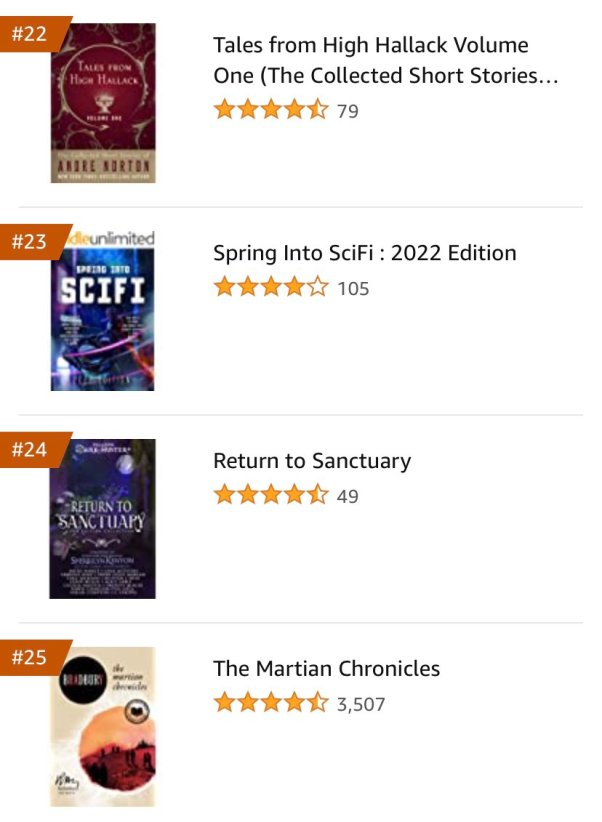 My hero, Elisha Rush, has suffered not one but two catastrophic losses in his life, and near the end of the story, he thinks he’s finally found happiness. That’s when everything goes sideways in a spectacular way.

Again, as of this writing, the anthology has garnered a total of 76% four and five star ratings out of a total of 106 global ratings.

Spring into SciFi 2022 edition has proven itself with Amazon and the critics. For a mere $3.99, you can download the book onto our kindle device, or if you want a paper copy in your hands, $13.99 will do that for you.

Remember to read my short story “Tiamat Descending” and let me know what you think.

Addendum: The numbers have slipped a bit but look at the company our humble anthology is keeping now (click on the image to enlarge it).