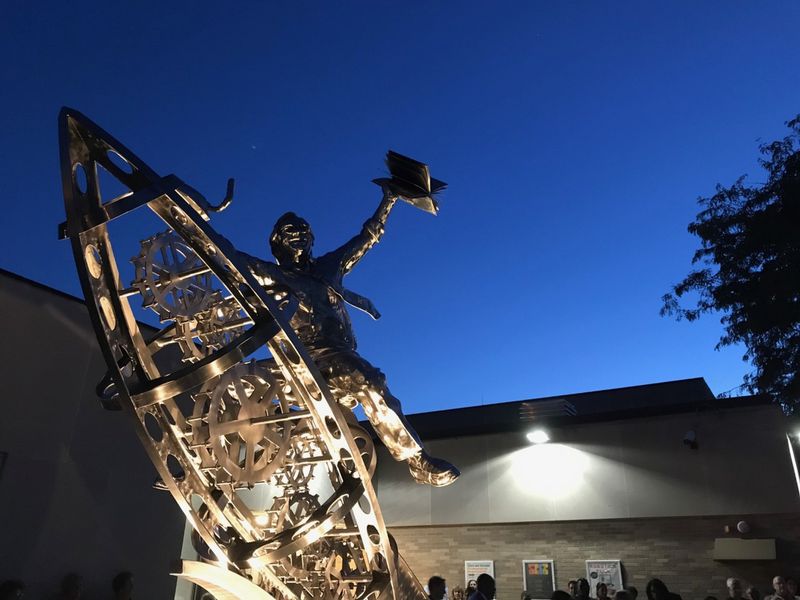 A statute honoring Ray Bradbury was unveiled outside the Waukegan Public Library just after sunset on Aug. 22, 2019, the 99th anniversary of the late author’s birth. (Dan Moran / Lake County News-Sun)

I just read an article at File 770 called Waukegan Public Library Unveils Ray Bradbury Statue (click the link and read, the story’s pretty short). Waukegan was Bradbury’s hometown and I’m thrilled to see that he is being honored. He is a truly timeless writer, and I can prove it, since my 33-year-old son Michael just read Something Wicked This Way Comes.

Over a year ago, I wrote my own wee Bradbury essay titled Should We Burn Ray Bradbury’s Books?. I crafted my missive in response to Katie Naum’s essay at Electric Lit called The New ‘Fahrenheit 451’ Movie Fails to Reckon with Bradbury’s Racism.

I seriously doubt he was a racist, at least in the dictionary definition sense, but assuming Bradbury had character flaws and perhaps some dated beliefs given that he was born in 1920, that doesn’t change his influence on the field of science fiction, nor make him unworthy of being honored.

Of course, we’ve seen this sort of thing before.

END_OF_DOCUMENT_TOKEN_TO_BE_REPLACED

I’ve been thinking a lot about disagreements recently. I’m no saint. I’ve participated in all kinds of arguments lately regarding folks I disagree with. I’ve disagreed with a Massachusetts elementary school librarian who took exception to the First Lady donating Dr. Seuss books to her school. I’ve disagreed with a former CBS Vice President who didn’t seem to mind that the victims of the Las Vegas mass shooting were (apparently) country and western fans and thus Republicans, and owners of firearms. I’ve disagreed with lots of people in the past and probably will continue to do so.

I don’t doubt there are a lot of folks who disagree with me about my stance on certain issues. It’s uncomfortable. I don’t particularly like it. But that doesn’t mean disagreement is a bad thing. Actually, the ability to express disagreement is a good thing. We need to keep doing it.

Why do I believe disagreement is good you ask?