After dinner, while heating water for tea, I walked into my granddaughter’s bedroom. We’ve reserved one of our two spare bedrooms for her, mainly because when she was smaller and stayed with us, she’d take afternoon naps. It still has her bed, a lot of her toys, plus the walls are decorated with her drawings and paintings.

She’s four-and-a-half, and as I was wandering around, I remembered something about her I’ll tell you about in a bit.

My grandson is almost eleven. Ever since he was about five or six, we have played “the game.” It started out in a really primitive form. He made up some situation and what his character was going to do to my character, but being an adult, I’d always find a way to top him.

As he got older, the stories became more sophisticated. For about two-and-a-half years, I turned some of those role playing games into an ongoing story for him published on this blog. I adapted the very first story I wrote for him, and it became one of my early published short stories in the Magical Reality fantasy anthology from Pixie Forest Publishing.

END_OF_DOCUMENT_TOKEN_TO_BE_REPLACED

I was spending time drawing with my three-year-old granddaughter, and while she was scribbling on her piece of paper, I borrowed another she’d lightly worked on and added a few things.

I can see all the colors of autumn out my back window, so naturally, I started with a tree. Then, because I read one of my dragon stories to my nine-year-old grandson earlier, I had to add a few of them. 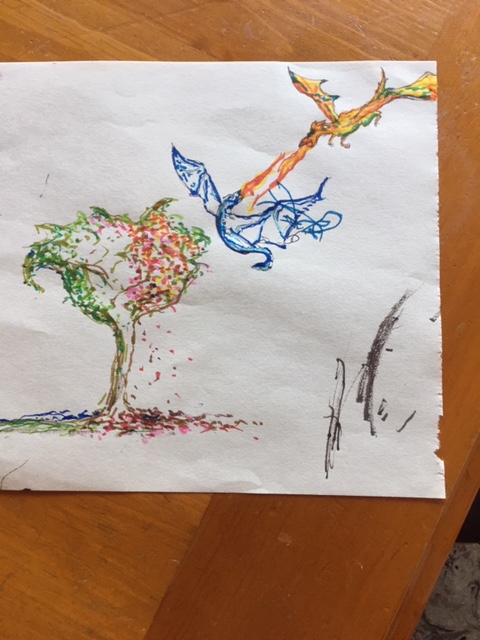 END_OF_DOCUMENT_TOKEN_TO_BE_REPLACED

I’ve been thinking about what is and isn’t important lately. Yes, there are a lot of arguments on the web positing this cause or that as important, and the authors declaring anyone who isn’t wildly enthusiastic, embracing, and endorsing of their project as horrible, terrible human beings.

I admit to being caught up in all that from time to time…okay, most of the time, but then I stop and realize that for the sake of my emotional and mental health, I can’t let other people or groups wind me up like I’m their toy doll. For instance, occasionally, I’ll get a troll in my one of my social media feeds attempting to rile me, but when I confront him, he denies it, saying he was just trying to understand my position more.

So it goes. Most of the time, I don’t even respond to him. His presence is almost always one where I can predict what he’ll say and even on which of my posts he’ll respond. A few others like him who used to do something similar, while remaining my Facebook “friends” or following me on twitter, otherwise are absent, but I must admit, I have also “muted” them as well, again because I don’t need the aggravation (and now that I’ve satisfied the requirements of Mindlovemisery’s Menagerie’s Opposing Forces challenge, on with the show).

So what is important? Lots of things, but I’m going to focus on my three-year-old granddaughter. My son and his ex are divorced and one week the kids stay with their Mom, while the opposing week they stay with their Dad (and with us much of the time).

END_OF_DOCUMENT_TOKEN_TO_BE_REPLACED

“What am I doing here? I wanted to get away from it all, but the smoke’s even worse here.” Gary Flowers didn’t hike often anymore, but life in the city and suburbs had been wearing him down over the last decade or so. Married, three children, two grandchildren, divorced, semi-retired, he had in his grasp what people used to refer to as the American dream. Of course, all those who didn’t have the opportunity to seize that dream resented people like him, or maybe they just weren’t in the right place in history he had been when he was up and coming.

Yes, he had grasped the American dream, but then slowly let it slip away. Life had become dull and meaningless. His children were grown and didn’t need him anymore, and besides his grandchildren, he couldn’t say that anything mattered to him these days.

And every summer there were these fires. The governor blamed global warming and the utilities company, and the news agencies blamed the governor’s poor wildfire planning, and his emphasis on social reforms over thinning the overgrown forests.

END_OF_DOCUMENT_TOKEN_TO_BE_REPLACED 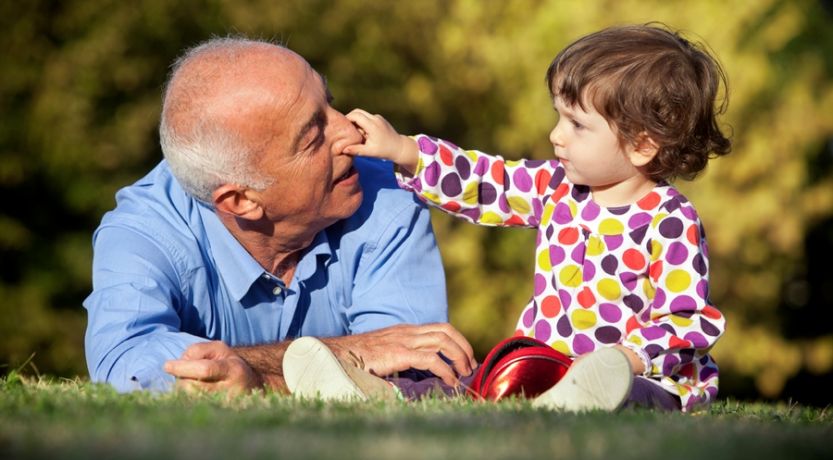 Charles felt his forehead calescent and damp. Struggling to free himself from the comfort of his bed sheets, he staggered to the window. Pulling open the blinds, he unlatched and then lifted the frame, letting the cool morning breeze into his bedroom.

A violent paroxysm of tremors accompanied by dizziness seized him, forcing the older man to kneel on the carpet, resting his head on the window sill.

After a few minutes, he felt his temperature go down a bit, and he risked trying to stand. Hesitantly, he made his way into the kitchen and put the tea kettle on. As the water heated, he opened his back door and several more windows attempting to cool his stiflingly warm house.

END_OF_DOCUMENT_TOKEN_TO_BE_REPLACED The rose stem was another sign that the world was shutting down, except that a small spider had chosen to use it as a platform for dining. The grass was still green but all of the leaves were making their stately transition to reds and golds. He was entering another autumn as he continued through the autumn of his life. He could hear his grandchildren screeching and giggling as they playfully chased each other across the lawn. They were his spring now, no matter how bitter the coming winter.

I wrote this for the Rochelle Wisoff-Fields photo writing challenge. The idea is to use the image at the top to inspire the creation of a piece of flash fiction no more than 100 words long. My word count is (amazingly) 89.

I looked up “rose stem” on Google and only came up with a skin cream. The blossoming of roses is variable but generally they bloom from mid-spring through fall. The scene reminded me of the beginning of autumn here, still pleasantly warm days with a bite in the night air.

So I chose to write another “Grandpa” tale about the “life cycle.” Not much drama to be sure. Just a few moments of reflection as winter continues its relentless march toward an eventual spring outside of my home.

Dave closed his soda shop on Sundays for two reasons. As a devout Christian, he believed Sunday was the Sabbath and he refused to do business on Christ’s holy day.

The second reason was more complicated. He knew they needed to have some time just the two of them. Each Saturday night, right after he closed, Dave put two empty paper cups at their favorite table, number 19. When he opened up Monday morning, the cups were disposed of in the trash, one cup containing the residue of cherry soda, and the other an orange crush.

Nine-year-old Sara and her six-year-old sister Leigh died ten years ago in a car accident just a few blocks from their Grandpa’s soda shop. Weeks later, Dave noticed his supply of cherry soda and orange crush diminishing. Paper cups went missing, and the chairs at table 19 kept moving around.

Dave asked why they weren’t in Jesus’s loving hands but Heaven didn’t answer.

Maybe they missed their Grandpa and his sodas too much to go, at least for now.

I’ve been thinking of my Dad’s passing recently and am very happy to be back home to be with my two grandchildren. I suppose that all got woven into the fabric of this tale.

To read other stories inspired by the prompt, go to InLinkz.com.

Gary woke up from the nightmare in a cold sweat. It was the same dream every night for the past week. He saw a man burning. The burning man was wailing. He reached out for Gary. His flaming hand almost touching his face.

Then Gary would wake up in a cold sweat.

He had just gotten his first job out of college as a mechanical engineer. The company had him move to Philadelphia, and for the next year, he would be helping to design a new generation of popcorn maker for movie theaters.

“It’s probably just the move. I’m in a strange place. That’s it.”

Gary got out of bed, then looked at the clock, and realized it was only 4 a.m. He could sleep for another few hours.

“Nah.” He headed toward the bathroom of his studio apartment. “Just have to keep drinking coffee to keep going.”

END_OF_DOCUMENT_TOKEN_TO_BE_REPLACED

The hospital. My son and daughter-in-law are in ICU. The car wreck. They survived, but my grandchildren…eight year old Patrick, 2 year old Sarah…they’re dead. They’re dead.

I had the power to save their lives and I let that bitch tell me I wasn’t worthy of using it.

END_OF_DOCUMENT_TOKEN_TO_BE_REPLACED

I used to be like this junk. Drinking, smoking, a broken plastic person. A terrible father. A worse husband. Disreputable, divorced, self-destructive. But that’s before they were born. My grandchildren. They made me believe in myself because they believe in me. Now the man I was is just like this stuff, discarded. I’m sitting on this hill watching them frolic on the playground in the park below.

“C’mon down and play with us,” Johnny shouts.

“Yeah, Grandpa. Push me on the swing,” Cindy adds.

I stand up and walk toward my redemption.

Written for Rochelle Wisoff-Fields’ Friday Fictioners challenge. Based on the photo prompt above, you’re supposed to write a complete story of no more than 100 words. Mine came in at 93.