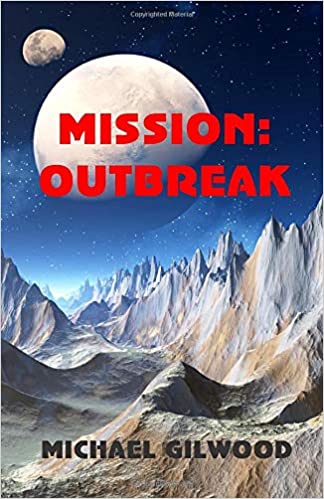 Starting Mission: Outbreak by Michael Gilwood, when I read that 200 year old human remains are found on one of Neptune’s moons, I was somewhat reminded of James P. Hogan’s novel “Inherit the Stars,” which I’d consumed some decades ago and remembered enjoying.

But afterward, there was a significant section of exposition which, I suppose, was necessary to cover a long stretch of history in a shorter span of pages.

After that, I found Gilwood’s novel was a sort of mix between the original Star Trek television series, and something written by E.E. “Doc” Smith.

That’s not necessarily bad as far as it goes, but not only did it seem familiar, but too often repeated as a science fiction trope.

Captain Philip Wakefield and our heroes on the starship Excelsior visit an alien planet in search of clues of perhaps humanity’s origins, as well as evidence that the Earth has been visited before by extraterrestrials.