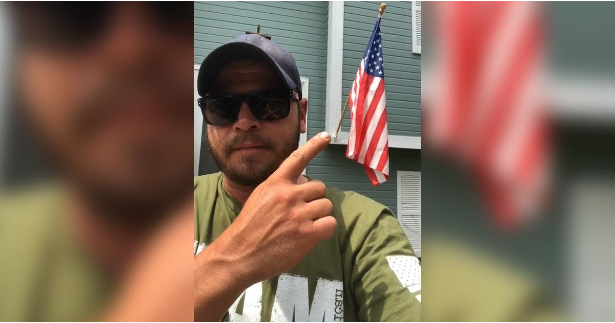 When the kid walked up his driveway, Johnny recognized him as Randall Berry, who had moved to Boise with his family from Seattle last month. That didn’t surprise him one bit. Johnny got up from where he was sitting on his front porch as Randall approached. “Evening.”

“I see you still have that symbol of hate flying,” pointing at the American flag mounted to the right of Johnny’s front door.

“I see you had the nerve to back up that threat you made in the anonymous note you had the audacity to tape to my front door.”

“You should have done what I told you to do and gotten rid of the flag. I promised you a fight where you would lose.”

“Take your best shot you motherf-cker.”

END_OF_DOCUMENT_TOKEN_TO_BE_REPLACED

Alex and Ginnie brought their heavily armed team up to the top of Crystal Peak. They didn’t have much time and had no hope at all. When they placed the flag here six months ago, they knew they were breaking the law, but America had been founded by a courageous group of law breakers. This time, there would be no forming a new nation, because the America they knew, the one their fathers and grandfathers knew, was gone.

First, it was “taking the knee” during the pledge in protest. Then there was stomping on the flag or burning it, and posting the videos to YouTube, which immediately went viral. Finally, at the behest of President Julian Sanders, Congress abolished the Constitution to form the People’s Socialist Party of America. Flying Old Glory became illegal.

“They’re coming.” Ginnie grabbed her husband’s arm. He said nothing and waited. The small band of resistance fighters watched the brigade of black-clad security forces and prepared to make their last stand and die with their nation as did their forefathers.

I wrote this for the 171st FFfAW Challenge hosted by Priceless Joy. The idea is to use the image above as the inspiration for crafting a piece of flash fiction between 100 and 175 words long. My word count is 175.

After a vain attempt to locate where the photo was taken, I decided on a different approach based very loosely on news items I’ve been reading over the past couple of days. As difficult as some of those events may seem and how some people view the U.S. currently, it could still be much, much worse.