Aditya Deshmukh’s short story Plastic Nightmare reads more like a prelude to a novel than anything else. It certainly ended on a cliffhanger, and Deshmukh even states that there will be a sequel.

I really felt like the author didn’t give himself enough room to develop the situation or the characters.

Five years ago, police officer Razia lost her brother. To the rest of the world, it was a tragic accident, but accidents don’t happen in their future utopia. The result is that she has increasingly become obsessed with his disappearance, letting her career begin a long, downward spiral.

Her main foil seems to be her lover and her boss on the police force (not a good combination), and when what appears to be a serial murder impossibly occurs in a world with practically no crime, Razia starts making connections between the so-called “Scarlet Killer” and her brother’s vanishing.

END_OF_DOCUMENT_TOKEN_TO_BE_REPLACED

Vehicle of a woman charged with assault with a dangerous weapon – attributed to Boston station WBZ-TV.

“But why are you arresting me? He’s the racist!” Melissa Becker was struggling and putting up quite a commotion as Police Officer Irene Atkins pressed her against the side of her car and handcuffed her.

“No, I’ve got her.” If it had been any other male officer, Irene would have taken the question as condescending, but Mike was one of the few in the Department who cared more about doing the job right than whether a cop was a man or a woman.

“Watch your head.” She eased the 25-year-old Becker into the backseat of the patrol car, holding the top of her head so she wouldn’t bump it as she entered. She’d already read the younger woman her rights and wanted to get this circus over with as fast as possible.

END_OF_DOCUMENT_TOKEN_TO_BE_REPLACED 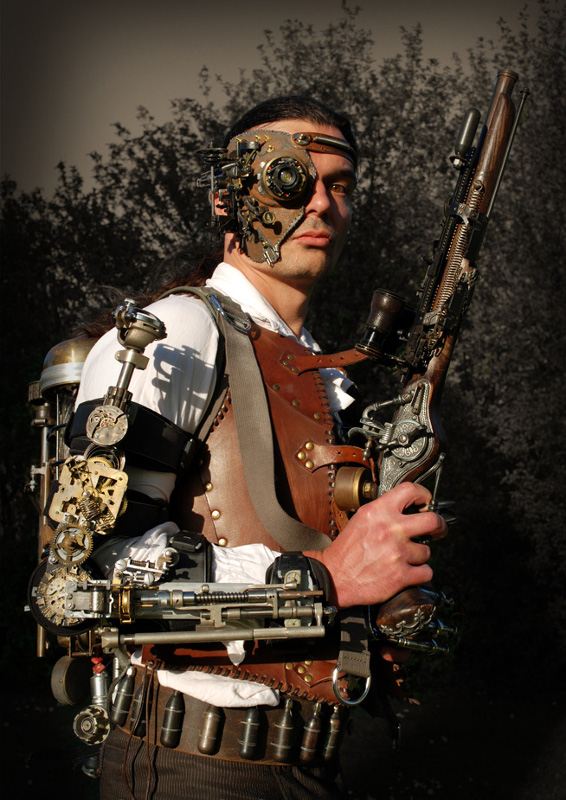 Alexander Schlesier – steampunker.de – This work is free and may be used by anyone for any purpose.

“A child needs a grandparent, anybody’s grandparent, to grow a little more securely into an unfamiliar world.” –Charles and Ann Morse

The elevator was rocketing downward so fast, Keisha thought she was going into free fall and grabbed the ornate wood and ivory safety bars that were attached halfway up the walls. Forcing panic and bile back down, she looked for a control panel, but all she saw was a handle attached to a semi-circular brass plate, with the words “Top” at the right side, “Ground” at the mid-point, and “Bottom” at the left. The handle was locked straight up at “Ground.”

Just before she thought she was going to die, the elevator quickly decelerated, slamming the girl on her bottom next to the duffel. Landing with an “Oof,” she decided she wasn’t going to escape this experience until she was covered with bruises.

The whining sounds of spinning gears slowed and the doors opened with a hiss, letting the thin clouds of steam and machine oil escape. A figure stepped through the mist. A woman’s hand emerged and beckoned, and Keisha quipped, “Go with you if I want to live?”

“Are you Keisha? Where’s my husband?”

“If you’re Isaiah’s wife, he said to hide me from the police.”

END_OF_DOCUMENT_TOKEN_TO_BE_REPLACED

The miniature yacht and skiff pulled floaters as it drifted up channel. The yacht’s deck was covered with torn tarps from the storm it weathered the night before. The current carried the pair up river by midday. They were noticed by a lone Ranger, who called it in to the Park Service.

A small police boat pulled alongside, tied up to the larger vessel, and Officers Bridger and Kahn climbed aboard. The children were huddled in the main cabin, terrified.

“It’s okay, kids. We’re here to help.” Madelyn Kahn loved her own children, and loved everyone else’s. One moment, Erin and her little brother Matty were cringing from the strangers, and the next, they were sheltered in Maddy’s embrace.

Craig Bridger left them to search and found nothing on the yacht.

Then he used his binoculars to scan the skiff. It was another alien Time Skimmer. It used the storm to pull the vessels from the past to escape the temporal police. It probably killed the parents, but needed indigenous beings to time travel on Earth. Unconscious, they’d take it into custody and turn it over to the time authorities.

Written as part of Sunday Photo Fiction – January 29th 2017, which uses a photo prompt to inspire flash fiction of no more than 200 words. My wee tale comes in at exactly 200.

To read more stories based on this week’s prompt, visit InLinkz.com.

Joel had been bringing his son Chris to the Nanking’s on Balboa since he was seven. They had father-son talks over dumpling soup or dry-fried chicken. Tommy Woo, the owner, was like an uncle to the boy. Joel and Chris eventually became a fixture at Nanking’s.

Chris was 30 now and engaged. This was their last lunch together.

Nanking doesn’t open until noon, but Joel asked Tommy for a favor. They lunched at ten just the two men with Tommy and his staff.

Chris opened his fortune cookie and read it. “Your life will change dramatically. Never thought these things were true until now.”

Joel smiled weakly and looked out the window.

“Yes, Dad. Thanks for this one last time together.”

They stood. Tommy was near the kitchen door, tears streaming down his face.

“I love you, son.” They embraced, both crying now.

“I’ll turn myself in. You’re right. I caught Mallory cheating on me, but I shouldn’t have killed her. Now I’m going to prison.”

I wrote this in response to the Flash Fiction for Aspiring Writers challenge. Based on the photo prompt above, ideally, you’re supposed to write a flash fiction story of between 100 and 150 words, however the word count can go up to 175. That’s good, because my wee tale comes in at 170 words.

To read other stories based on this week’s prompt, visit InLinkz.com.

There’s a very slight similarity to reality here. My son David and I periodically meet at a local Thai restaurant on Fridays about once every three months or so to spend time together. Beyond that, the story is pure fiction.