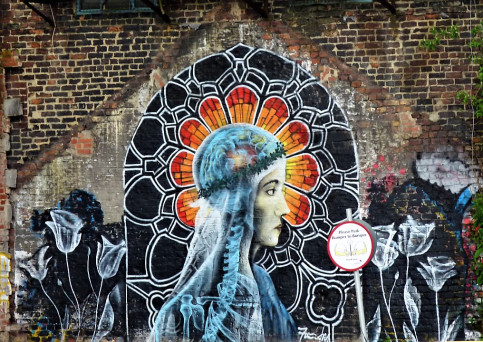 Eleven-year-old Keel watched his thirteen-year-old sister Alina from behind as she trudged down the alleyway. "C'mon. Don't wanna b late," she signaled.

The thin, waif-like boy, walking through January’s half-frozen muddy puddles in dirty, sandaled feet, dressed in over-sized khaki shorts with hems down to his shins, and a ratty green sweater made from an old Army blanket, heard her synthesized voice and simultaneously saw the text on his head’s up.

"Geek off. We've got time," was his caustic reply. He had slowed so he could look at Gemmi’s tagging, he was pretty sure it was her work, freshly painted on the old bricks. He was oblivious to the cold breeze from behind, blowing his matted, tortilla-colored hair with violet tips (all that was left of last November’s dye job) into his eyes.

"This is more important than your hotties for Gemmi." She impatiently grabbed his wrist, causing him to regard his sib for the first time that morning. She covered the holes in her thin, coffee-stained white tank top with a black leather vest, the one she ripped off from the dying multiplex in the burbs last month. There were just as many holes in her black yoga pants (she liked retro), and if he’d listen to her actual voice instead of what came through the interface, he’d have heard the faint, metallic click as numerous piercings colliding in her mouth when she spoke.

END_OF_DOCUMENT_TOKEN_TO_BE_REPLACED

Fantastic news. On the heels of receiving an email saying that my first story was accepted for an anthology on Sunday morning, yesterday, I received the following:

Thanks for contributing to WORLD WAR FOUR. When we started Zombie Pirate Publishing in 2017, we could not have guessed at the enthusiastic support we would get from writers around the world. WORLD WAR FOUR received more than forty submissions. We thank you for your contribution.

We really enjoyed your submission Joey and would like to inform you it will be included in the publication released March 1st. Congratulations!

Yes, Adam Bennett and Sam M. Phillips at Zombie Pirate Publishing accepted my short story “Joey” for their World War Four (yes, you read that right) anthology, due to be published March 1, 2019.

END_OF_DOCUMENT_TOKEN_TO_BE_REPLACED 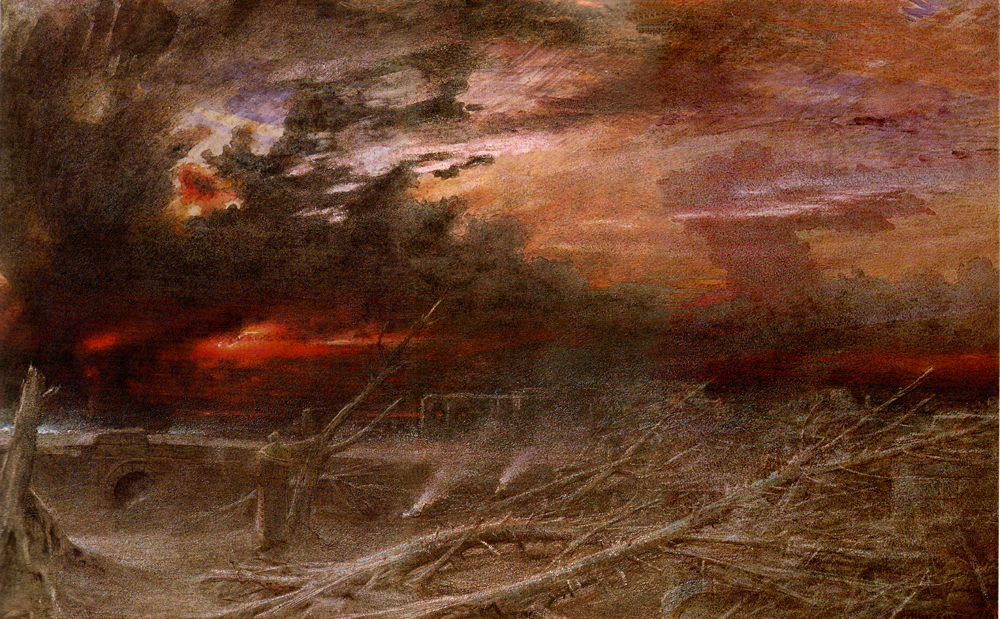 Post apocalyptic art by Albert Goodwin, 1903 – a work in the public domain

Gray-haired, burnt-skinned Santos had forgotten the number of times he had appealed to the Glow for an end to his journey through the hell lands. He couldn’t fool himself with the placebo anymore, and so as he put out the campfire and slipped on his rucksack, the dull pain in his right knee became his rough companion with each step, thanks to the oblique scar left by the direwolf last Fall.

The old woman he encountered in one of the shelters reclaimed from a flatlands hell crater had tried to minister to him, but the scar tissue had already formed, and her potions were far too weak to repair damaged cartilage. Being maimed didn’t bother him as much as the fact that having to leave her alone again, she died two days hence, probably by the same pack that had struck at him, as evidenced by the sign of the carrion birds circling above her hut.

But heartstrings weren’t something he could afford. She had refused to go with him when he asked. The reluctant ranger told her the plague to the East was spreading by rats and sand hares, had consumed his community, and that the only safety was his destination, the half-mythical city beyond the western foothills. But she said she’d made her peace with the high desert and the hell lands. Her husband and five sons had died during the first disaster, and being of prairie stock, she chose to stay, to tend their graves, living off of a meager garden, wearing sackcloth and ashes.

She never said her name or how long she’d been alone, but he kept seeing her face, cut and grooved with wrinkles like a river delta as step by step, limping, praying to the Glow with each gasp of pain, he kept walking.

END_OF_DOCUMENT_TOKEN_TO_BE_REPLACED

Lee watched his two grandchildren explore the garden. Once it was one of numerous community projects in this mid-sized northwestern city. Now it was a matter of survival.

“What do you think? Think your grandkids will like it here? We’ve got plenty of children their own age, and my wife’s putting together a school curriculum.” Andy Lambert was a carpenter by trade, but he knew how to recruit with the skill of a salesman.

Leland Henderson didn’t take his eyes off of the eight and three year old kids. “Yeah. I think it’ll work out okay. We’d be glad to join, what do you call yourselves?”

“Right. The Remnant. Guess it’s as good a name as any.”

“Damn right it is. There used to be over 7 billion people in the world, but thanks to the Doomsday Plague, we’ve got less than 6 million left, scattered in little communities like ours all over the globe. Farming, fishing, hunting, we have to preserve the old skills. Geezers like you and me have got to survive and care for the youngsters. Your grandkids and mine are going to inherit and rebuild the Earth.”

I wrote this for the Sunday Photo Fiction writing challenge. The idea is to use the photo above as a prompt for crafting a piece of flash fiction no more than 200 words long. My word count is 197.

Yes, those are my grandchildren, and because I promised my son I wouldn’t put photos of his children online, I made sure I selected on where their faces can’t be seen.

I won’t tell you where or when this picture was taken because I don’t want it to influence how others might create their stories.