Founded in 2017, Adam Bennett and Sam Phillips have produced a plethora of anthologies, giving indie authors like me, the opportunity to have our tales see the light of day and become available to readers.

My short story Joey, originally published in the SciFi anthology World War Four (please readers, post more reviews), is featured in the “Treasure Chest.” It’s one of my strongest missives emotionally, and I’m glad it was selected.

END_OF_DOCUMENT_TOKEN_TO_BE_REPLACED

Today’s the day. My short story “The Mechanical Dragon” is featured in this Zombie Pirate Publishing anthology.

I have a hard time not offending anyone. When I write horror, some of my friends are unhappy with me, and while I consider my “Dragon” story to be pretty benign, I know that anything to do with magic and dragons rubs some folks the wrong way.

END_OF_DOCUMENT_TOKEN_TO_BE_REPLACED

Just thought I’d throw this one in. Remember, CLOCKWORK DRAGONS: A Fantasypunk Anthology is available now for pre-order to be delivered to your Kindle device on January 15, 2020.

END_OF_DOCUMENT_TOKEN_TO_BE_REPLACED 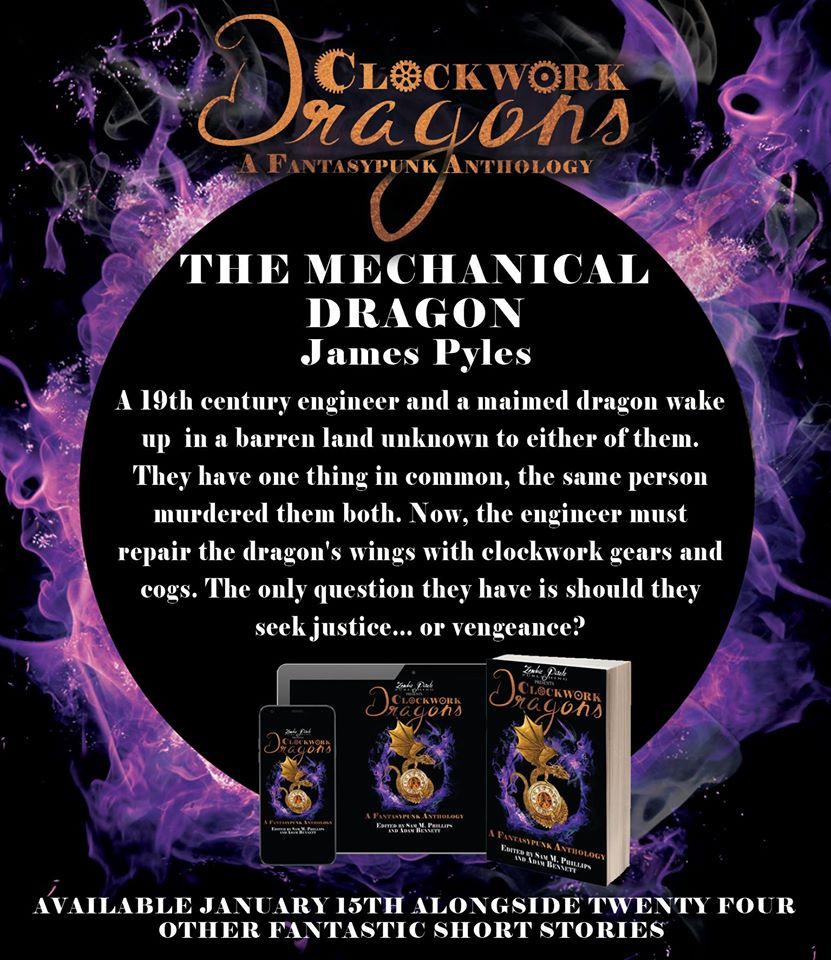 Zombie Pirate Publishing is running a promotion on Patreon. Sign up for as little as one US dollar, and gain exclusive access to their soon-to-be published CLOCKWORK DRAGONS: A Fantasypunk Anthology.

END_OF_DOCUMENT_TOKEN_TO_BE_REPLACED

This was a nice (almost) surprise. Zombie Pirate Publishing, which has been in existence since 2017, has featured some of my stories in their anthologies, and is producing a “round up” anthology of their favorite tales in Treasure Chest: Selected Short Stories. It’s available for pre-order on Amazon now, to be downloaded to your Kindle device December 1, 2019 (a terrific Christmas gift, by the way).

My classic SciFi tale Joey is featured in its pages.

Joey was first published in the ZPP anthology World War Four back in March of this year, along with many other fascinating tales, including best selling science fiction author Neal Asher‘s novelette “Monitor Logan.”

Here’s an excerpt from the beginning of “Joey”:

END_OF_DOCUMENT_TOKEN_TO_BE_REPLACED 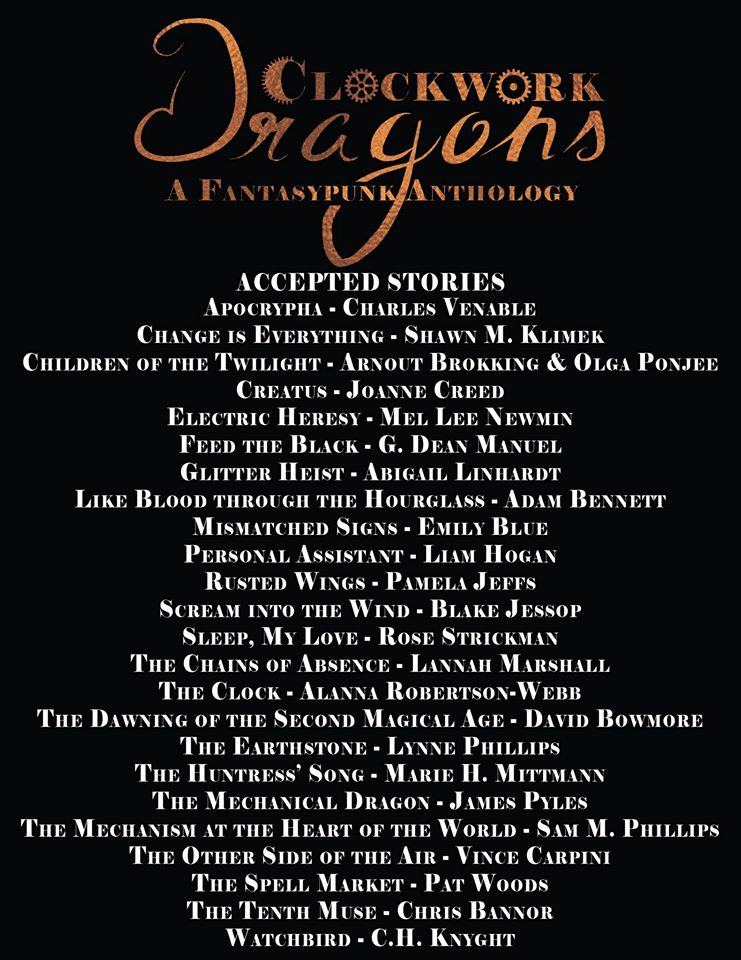 I’ve been waiting a few days to be able to brag about this one.

About a month ago, I had hit a dry spell, and decided to “loosen up” by participating in a writing challenge, not something I do a lot of these days. I was considering writing a story for an open submission, but I didn’t know how to approach it.

So I crafted the 150 word tale The Clockwork Dragon.

That got things moving and I was able to forge ahead with the actual story. A few days ago, it was accepted for publication by Adam and Sam at Zombie Pirate Publishing for their upcoming anthology Clockwork Dragons: A Fantasypunk Anthology.

END_OF_DOCUMENT_TOKEN_TO_BE_REPLACED

Cover art for the anthology “The Collapsar Directive

Disclaimer: I received a free digital copy of this anthology on the condition that I would write and publish a review. I have also had a short story and a piece of flash fiction published by Zombie Pirate Publishing, but none of my stories appear in the anthology I am reviewing, The Collapsar Directive.

Actually, the anthology’s title is taken from a story written by Adam Bennett, co-founder of Zombie Pirates, called “The Sword and The Damocles,” a tale about two interconnected intergalactic spacecraft. Like many of the short stories in the anthology, I found it to be “okay,” but not particularly remarkable. Of course “Collapsar” was published a few years back, and I know that many of the authors have since honed their writing skills.

Mel Newmin’s “Looking at the Face of God” had a nice twist to it, but I objected to the idea of releasing zoo animals back to the wild, since animals kept in captivity often lose their ability to fend for themselves in an untamed environment. Once the big reveal occurs, the results become interesting, but then science fiction does sometimes have the created confront their creator.

END_OF_DOCUMENT_TOKEN_TO_BE_REPLACED

That’s the challenge from Zombie Pirate Publishing. Actually Adam and Sam have given us less time than that since according to the JavaScript counter on their main page, I’ve got (as of this writing) just a hair over 5 days and 21 hours. So far I’ve hammered out 2,180 words, but the target word count is between 12,500 and 15,000, so I’ve got a bit of work to do, including plotting the story as I go along.

END_OF_DOCUMENT_TOKEN_TO_BE_REPLACED 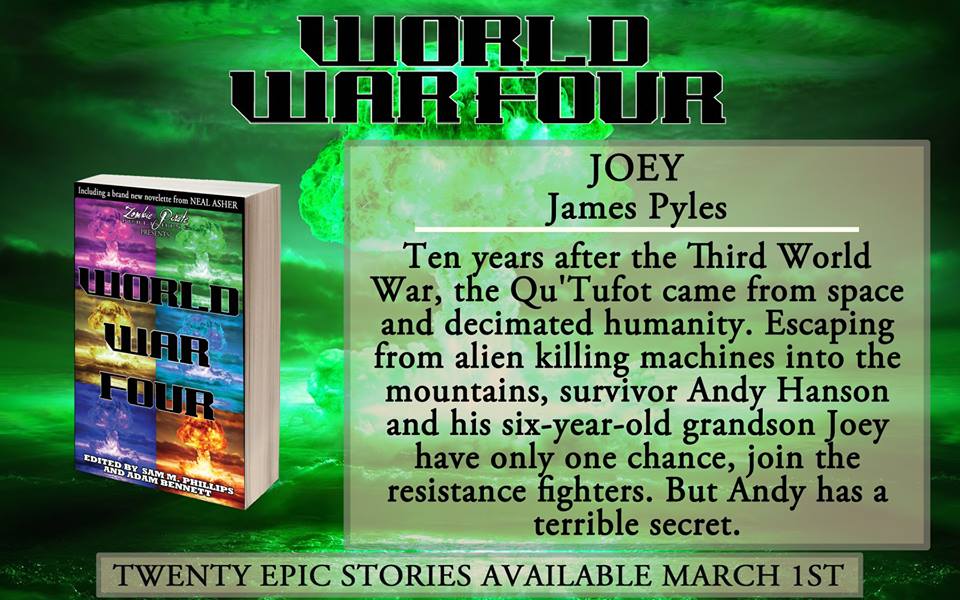 World War Four, a science fiction anthology published by Zombie Pirate Publishing, features my short story “Joey” as well as a novelette by best-selling author Neal Asher. For the next four days, the ebook is 40% off its regular price at Amazon. This is a great time to download it to your kindle device and enjoy twenty outstanding SciFi tales of the war after World War Three.