I put the following in a comment on my original Kavanaugh post, but things are heating up and I decided I wanted to write a full essay.

Apparently, a new Cavanaugh accuser has come forward, but her allegations are disturbing for a number of reasons:

In an explosive statement released by (her attorney Michael) Avenatti, Swetnick claimed that in the 1980s she witnessed efforts by Kavanaugh and his classmate, Mark Judge, to get teenage girls “inebriated and disoriented so they could then be ‘gang raped’ in a side room or bedroom by a ‘train’ of numerous boys.”

“I have a firm recollection of seeing boys lined up outside rooms at many of these parties waiting for their ‘turn’ with a girl inside the room,” she alleged in the statement. “These boys included Mark Judge and Brett Kavanaugh.”

Swetnick alleged she became one of the victims of “one of these ‘gang’ or ‘train’ rapes.” She did not say that Kavanaugh had sexually assaulted her.

Of course, it’s disturbing that Kavanaugh and Judge, as teens, (allegedly) maliciously got teenage girls intoxicated and then arranged gang or train rapes. If true, there may be scores of victims out there, and even after all this time, the cases could go criminal, or at least result in massive civil trials.

The other part is that Swetnick apparently didn’t do anything to protect these victims. I know that victims themselves often don’t disclose for long periods of time after their assault, but supposedly Swetnick knew exactly what was going on and did nothing either during the event or afterwards. It’s one thing to keep your own assault private, and another thing entirely to fail to protect girls who presumably were your friends and classmates.

All that aside, that’s three separate women coming forward, with the potential of more to come, which looks pretty grim for Kavanaugh. 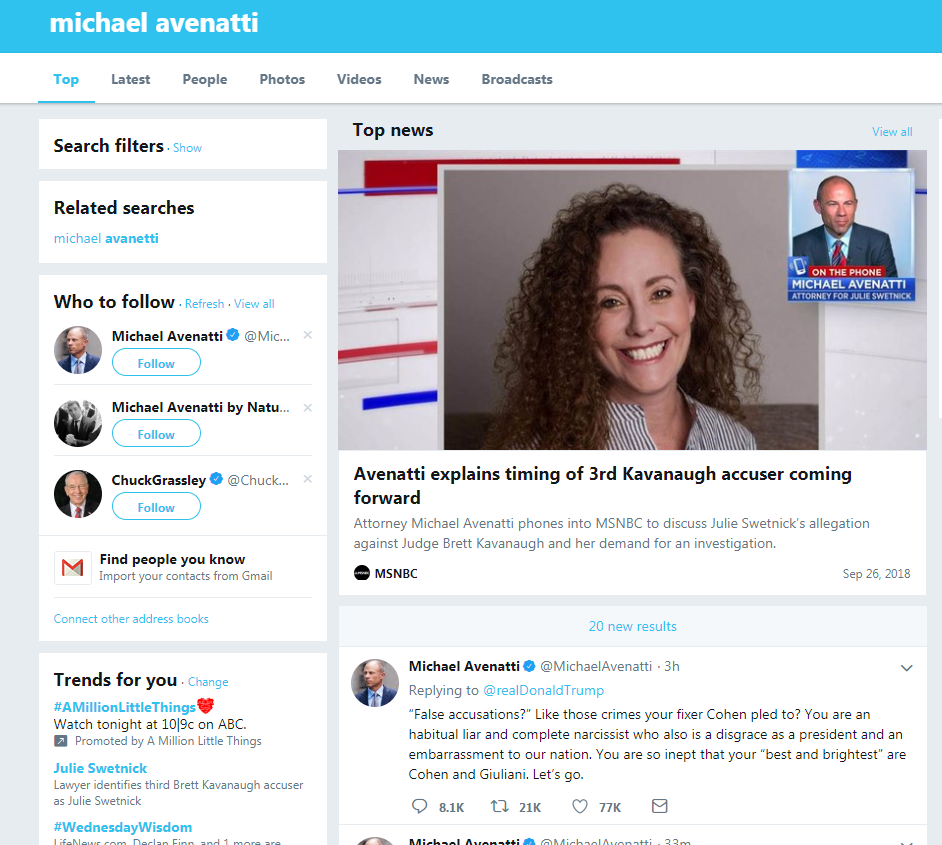 END_OF_DOCUMENT_TOKEN_TO_BE_REPLACED

Disclaimer, Trigger Warning, or whatever you want to call it: Depending on your politics and probably several other factors, this essay might tend to raise your blood pressure, so if you have strong feelings about the Brett Kavanaugh SCOTUS confirmation hearings before Congress, you might want to pass it up for something else (Yes, I’m going to get in trouble for posting this).

I’m sure just about everyone in the U.S. and probably a lot of people in other countries are aware of the controversy surrounding the Brett Kavanaugh Congressional hearings to determine if he should be confirmed as the next Justice on the U.S. Supreme Court, the highest court in our nation. Opinions about whether or not to confirm Kavanaugh in the News and Social Media were pretty much split down party lines before the sexual assault allegations made against him by Christine Blasey Ford, but then things just exploded.

I’m not going to go into the details of the allegations. You’re probably already well-versed in the details, and probably most of you reading this (like most everyone else) have already reached a conclusion about the validity of Ford’s claims.

What I am going to do is process the credibility of Kavanaugh and Ford.