Found at Mindlovemisery’s Menagerie and taken from Reddit.com – No other photo credit listed

Today was the day that Stefan Günther determined he would finally speak to his own personal Mona Lisa. Everyday for weeks, she sat across from him on the S-train as he made his evening commute home to his one-bedroom apartment outside of Wiesbaden and she went to who knew where.

“Hi. My name’s Stefan.” The twenty-seven-year-old accountant leaned into the aisle hoping she could hear him over the train noise and all the other conversations around them. “Since you smile at me every time I see you, I thought I should introduce myself.”

“Ludovica. Pleased to meet you, Stefan.” Her accent was unmistakably Italian and the same, subtle smile she had been wearing throughout all of their silent encounters never left her lips.

“Pleased to meet you.” He took her hand and remembered not to apply too much pressure. Her skin was warm and smooth, and her scent was slightly earthy speaking, he hoped, of seduction.

“I don’t mean to be too forward, Ludovica, but why do you always smile at me?”

“I like to smile. Besides, you remind me of someone.”

He chuckled nervously. “Anyone in particular.”

END_OF_DOCUMENT_TOKEN_TO_BE_REPLACED

“It happened in there.” Fifteen-year-old Christina Stevens pointed at the opening of the tiny, twisted cottage sitting in the park.

“I’ll have a look.” Senior Officer Angela Conner nodded at the teen then turned to her partner. “Watch him.”

“Why are you doing this, Chrissie? You know I didn’t do…”

The boy was interrupted by an elbow to the gut. “No talking to the victim, perp.” Beck scowled at the now doubled over high school senior. Then he gave the young blond girl his most charming smile.

After a few minutes, Conner walked back out of the cottage holstering a strange device.

“It’s a Temporal Scanner, Ms. Stevens. We’ve been using them for about five years now.” She turned to her partner. “I scanned the time frame when she said the incident occurred. Kids were in and out of here last month drinking beer. Stevens and Kelly were present but never at the same time and never alone together. Uncuff him. There’s no evidence.”

Tears welled up in the girl’s eyes. “But you’re supposed to just believe me.”

I wrote this for the Sunday Photo Fiction Challenge of September 30th. The idea is to use the image above as the prompt for crafting a flash fiction piece no more than 200 words long. My word count is 197.

Yes, I know this story will be especially unpopular in light of the recent testimony given at the Brett Kavanaugh hearings to potentially confirm him as a Justice on the U.S. Supreme Court. I’m not defending Kavanaugh and I’m not saying that his alleged victim Dr. Christine Ford is not being truthful. I’m also not saying that victims should routinely be disbelieved or ignored. However, I am deeply disturbed by the thought that 100% of all allegations of sexual assault must be believed without any evidence whatsoever and with no consideration for any other circumstances.

In my wee fictional tale, I decided to create the one piece of technology that could impartially examine the evidence at the time in which a crime was to have allegedly occurred. If Temporal Scanners were real, we could look back at any point in history and observe what actually happened. Memories (and any other motivations) would be irrelevant, since investigators could see and hear what really occurred.

It wouldn’t be a matter of belief. We would actually know.

To read other (more acceptable) tales based on the prompt, visit InLinkz.com.

I’m sorry, but there are always two sides to every story. I’m just presenting the flip side of the coin. 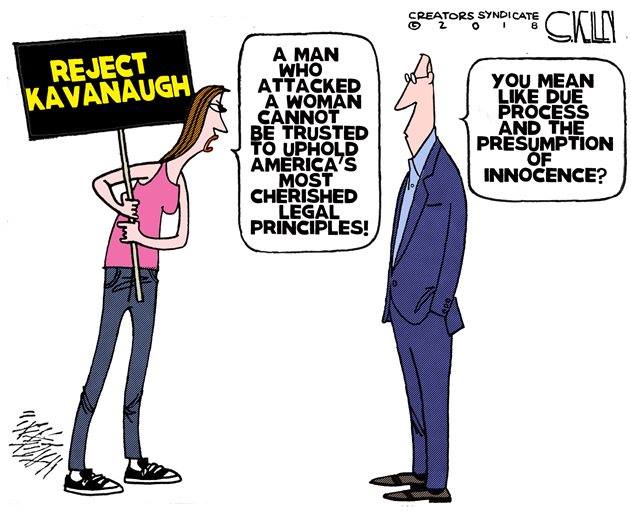 Disclaimer, Trigger Warning, or whatever you want to call it: Depending on your politics and probably several other factors, this essay might tend to raise your blood pressure, so if you have strong feelings about the Brett Kavanaugh SCOTUS confirmation hearings before Congress, you might want to pass it up for something else (Yes, I’m going to get in trouble for posting this).

I’m sure just about everyone in the U.S. and probably a lot of people in other countries are aware of the controversy surrounding the Brett Kavanaugh Congressional hearings to determine if he should be confirmed as the next Justice on the U.S. Supreme Court, the highest court in our nation. Opinions about whether or not to confirm Kavanaugh in the News and Social Media were pretty much split down party lines before the sexual assault allegations made against him by Christine Blasey Ford, but then things just exploded.

I’m not going to go into the details of the allegations. You’re probably already well-versed in the details, and probably most of you reading this (like most everyone else) have already reached a conclusion about the validity of Ford’s claims.

What I am going to do is process the credibility of Kavanaugh and Ford.

END_OF_DOCUMENT_TOKEN_TO_BE_REPLACED

Disclaimer: Given the writing prompt for today, I created a story that is PG-13, and bordering on R. The tale includes themes of sexual assault and violence, so please be advised.

Tiffany wasn’t sure he could hear her thoughts yet, but Ingmar was definitely in her head again.

It was her parents’ twenty-fifth wedding anniversary, and she and her two brothers were taking them out to dinner at Quince’s. She hadn’t even thought about him lately. It had been weeks since he had last assaulted her, and she had been desperately hoping he’d moved on to some other woman or man. From what he had leaked into her brain, that was his pattern. He bored easily.

“Because I can. Because it will be humiliating.”

END_OF_DOCUMENT_TOKEN_TO_BE_REPLACED Daniel McCoy stood on the rocks and cast his line again into the Pacific. No matter how chaotic other parts of his life became, fishing was his refuge of peace. He knew they would be waiting for him when he got back home. He would go peacefully. After all, he deserved this. But he needed to spend one more hour in heavenly solitude before facing the consequences of his acts.

Daniel McCoy, like the other inhabitants of Pitcairn Island, was the descendant of the nine Bounty mutineers. Their reputation had been romanticized over the centuries, but not so the crimes nearly a third of the modern male population of the island would be found guilty of. From mutineers to sexual predators. Their ancestors would be ashamed.

I wrote this for the What Pegman Saw photo writing challenge. The idea is to craft a piece of flash fiction no more than 150 words long using the photo prompt above. My word count is 126. Today, thanks to Google maps, we are taken to the Pitcairn Islands which have a rather colorful history, both ancient and modern.

I took the name “Daniel McCoy” from one of the Second Generation of the Bounty mutineers living on Pitcairn. As for the rest, it’s all true. You can read about how the current population of Pitcairn was founded, and then the sexual assault trials of 2004.