“Clayton, you’re out of your mind. You don’t even know if it will fly.”

“My dearest Julia, it’s been sitting in this rust trap for over half a century, but I’ll bet my right family jewel this thing will take us to the stars.”

“Don’t call me dearest. I’m your co-pilot, not your girlfriend.”

He liked the way she complained when he teased her, but then his manners with women had always been lax.

“How did you find this again?”

END_OF_DOCUMENT_TOKEN_TO_BE_REPLACED

Moshe Katz was in New York visiting his Tante and Feter, and they made the San Francisco Private Detective play tourist, including a visit to the Met’s Diamond Jubilee. Then things got ridiculous. He’d heard of Marian Anderson, but who the hell were Judy Collins, Yo-Yo Ma, and Itzhak Perlman?

“Alright, Mr. Watson, I’m going to give you a hand. The local cops don’t know how to handle this sort of thing, but my cases are more unusual.”

“We’d appreciate anything you can do. If word ever got out…”

“Relax. I’ll find out who here has a broken time machine.

I wrote this for the Rochelle Wisoff-Fields photo writing challenge. The idea is to use the image above as the inspiration for crafting a piece of flash fiction no more than 100 words long. My word count is 100.

I became dismayed when I realized that the photo was of a recognizable place, but I didn’t recognize it. Then Google image search came to the rescue. It’s the Metropolitan Museum of Art, otherwise known at the Met.

The museum celebrated its 75th anniversary (which it termed Diamond Jubilee) with a variety of events in 1946, culminating in the anniversary of the opening of its first exhibition on February 22, 1947.

What is coincidence. I created a San Francisco private detective named Moshe Katz who operates in 1947. He’s featured in the stories Death Visits Mexico and Son of Kristallnacht. So I decided to create a New York mystery for him to solve. Normally, his cases are rather mundane, but for this tale, I decided to change his history a bit.

Again, according to Wikipedia:

I didn’t read the paragraph carefully and was wondering how all of those performers could have been at the Met at the same time. Then I read more carefully, but the damage was done. What if there were a time machine accident and they really did appear at the Met simultaneously, and specifically on February 22, 1947?

Oh, Thomas J. Watson was the Met’s Vice President in 1947 and Tante and Feter are Aunt and Uncle in Yiddish.

You can read about the Met’s history to find out more. To read other stories based on the prompt, visit InLinkz.com. 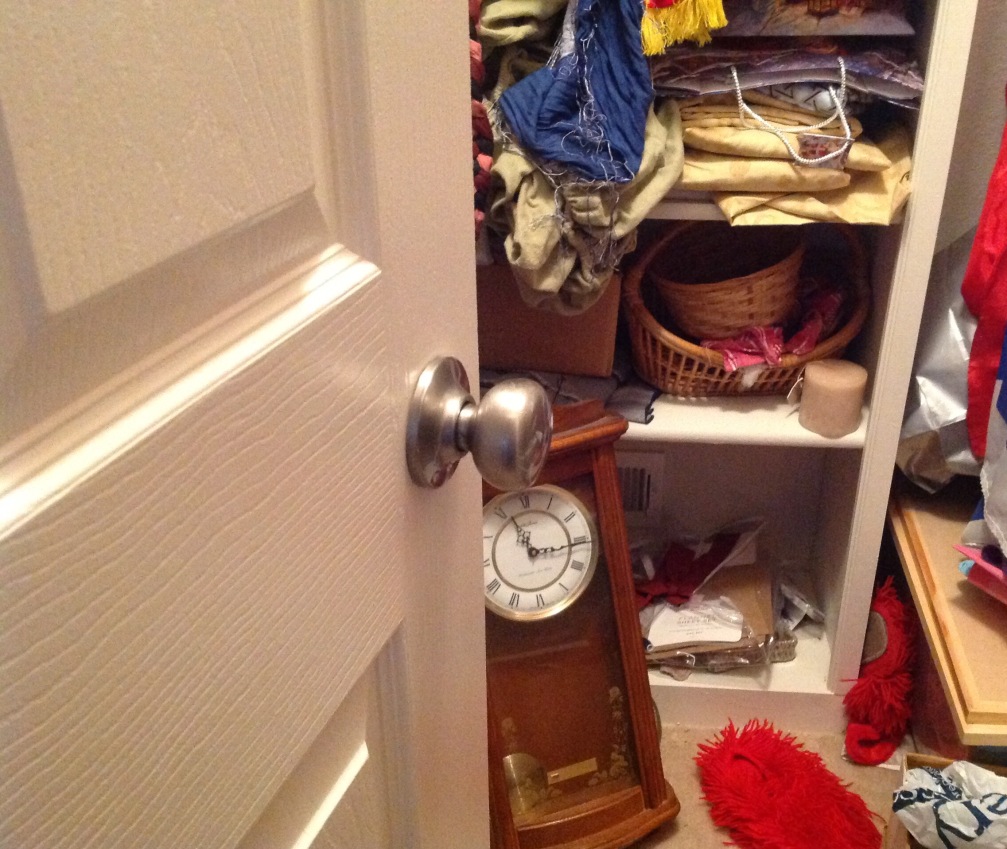 “Oh there you are. I was wondering where I put you.”

April opened her “junk closet” and finally found the time machine. She hadn’t used it in so long she’d forgotten where it was hidden.

“Honey, what are you doing?” Brady was calling from the kitchen while making breakfast.

“Be there in a minute,” she called back.

The text message she’d received last night from H.G. said he’d finally found the Zodiac killer and he needed help taking him down. Shouldn’t take more than a week or so, but she’d be back before her husband had the bagels toasted.

I wrote this for the Rochelle Wisoff-Fields flash fiction photo challenge. The idea is to use the image above as a prompt to create a piece of flash fiction no more than 100 words long. My word count is 99.

I saw the clock in the photo and immediately thought “time machine”. I mixed in a few character references I’ve used in the past in relation to the topic and created my occasional “time cop”. She has to help H.G. Wells capture the infamous Zodiac Killer which will take about a week, but with a time machine, from Brady’s point of view, she’ll only be gone a few seconds. Just feeling a tad whimsical this morning.

The Third Hunter and Ellison Time Travel Adventure and a direct sequel to In Search of the Time Traveler.

“I have a bad feeling about this, Josue.”

“Stop that! This is serious. This isn’t when we are supposed to be.”

Josue Hunter and Wyatt Ellison thought they were finally closing in on Heloise Amanda Westcott, the mysterious and elusive time traveler first detected in 1885 England. They’d found H.G. Wells, author of the famous novel “The Time Machine” and confederate of Westcott in Texas in 1940, and persuaded him to reveal the place and time they could locate her.

Wells wrote it down on a pad of paper with the letterhead of the hotel in which he’d been staying. Friday, 15 August 1994, 8150 Olive Avenue, Huntington Beach, California.

“Checking the unitool.” Hunter’s all-purpose utility device was disguised as a wrist watch. He set it to review the most recent log of their trip back in time.