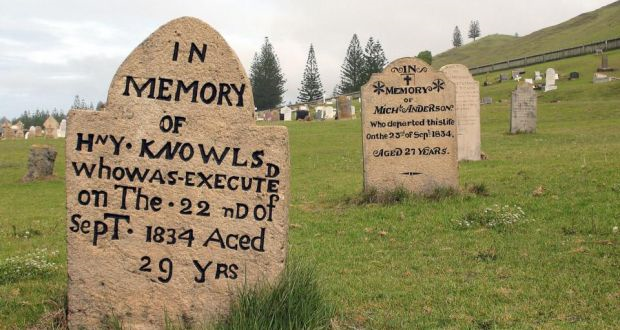 A gravestone in the cemetery of the brutal penal colony on Norfolk Island. Photograph: Lawrence Bartlett/AFP/Getty Images

Reverend Percy finally convinced the Church of England to relocate the Mission to the Solomons, ostensibly to be closer to the population of focus.

“Leaving our company now, Reverend?” A familiar voice chuckled from the darkness.

“I have no power here to dispel your kind, even in the name of Jesus Christ.”

“Your Savior won’t consort with us, Reverend. He’s already consigned us to the deepest pits of Hell. Best you pack and scurry off to that ship yonder.”

“Sir, I now abandon you to God’s mercy.”

“God abandoned us long ago with good reason. We all earned the gallows…would have perished except for Norfolk.”

Percy ran with his case to the open door. “I leave you and your sinful brethren, Mr. Robert Knowles.”

In 1920 the Melanesian Mission abandoned the former penal colony to the blacked souls of all the prisoners who lived and died there, and yet live on.

I composed this wee tale for the What Pegman Saw flash fiction writing challenge. The idea is to take a Google maps street image and location and use them as the inspiration in crafting a story no more than 150 words long. My word count (after a lot of editing as the original was over 100 words longer) is exactly 150. Today, the Pegman takes us to Norfolk Island.

I did a bit of Wikipedia research and discovered that it was yet another penal colony back in the day. What made it unique is that prisoners who had been sent to the Australian penal colony and who continued to commit crimes that should have earned them the gallows were then sent to Norfolk, a place of unspeakable brutality and sin according to this report.

I also learned that the island had been the headquarters of the Church of England’s Melanesian Mission between 1867 and 1920. In 1920, the mission was moved from Norfolk to the Solomon islands to be closer to their “population of focus,” but in my story, I suggest that it really moved because the hordes of blackened souls of all the damned prisoners of the colony horribly haunted and tortured the good Reverend in charge.

The mission finally abandoned the island of Norfolk, which had become a Hell on Earth. Being so close to Halloween, I thought I should turn the prompt into a ghost story. Of course, all this is fiction as are the names of the two people in my tiny saga.

21 thoughts on “Abandoning the Dead”