Scene from the film “Wayfinders a Pacific Odyssey Hawaii”

Father Francisco DelVega Ortiz cursed Lucifer as he was brought before the pagan Chief. He had been part of a special mission to these islands, but Captain Scarr’s foolishness caused his ship to collide with an uncharted reef. Rough seas and high winds tore the Esteban apart. The Priest was the only survivor.

“I have met Europeans before.” The savage spoke in surprisingly good Spanish. “You make fine sacrifices and will strengthen the temple’s foundation.”

Father Ortiz was held by four mountain warriors but struggled defiantly. He spat out, “There will be others after me, Talamaur. Oh, yes. I know what you are. The Holy Order of Venandi will eradicate your kind in the name of the Virgin Mary.”

“Perhaps, Priest. My people will grow strong eating your sacrificed flesh, but I reserve the blood for myself.” The heathen Chief sitting on his obsidian throne bared long fangs and hissed.

Time for another short story for What Pegman Saw. The idea is to take a Google maps location and image and use it to inspire the creation of a piece of flash fiction no more than 150 words long. My word count is 150.

Today the Pegman takes us to Fiji. I was all set to write about a warm, tropical paradise when I looked up Fiji’s history and found some pretty disturbing news.

Over the centuries, a unique Fijian culture developed. Constant warfare and cannibalism between warring tribes were quite rampant and very much part of everyday life. During the 19th century, Ratu Udre Udre is said to have consumed 872 people and to have made a pile of stones to record his achievement. According to Deryck Scarr, “Ceremonial occasions saw freshly killed corpses piled up for eating. ‘Eat me!’ was a proper ritual greeting from a commoner to a chief.” Scarr also reported that the posts that supported the chief’s house or the priest’s temple would have sacrificed bodies buried underneath them, with the rationale that the spirit of the ritually sacrificed person would invoke the gods to help support the structure, and “men were sacrificed whenever posts had to be renewed”. Also, when a new boat, or drua, was launched, if it was not hauled over men as rollers, crushing them to death, “it would not be expected to float long”. Fijians today regard those times as “na gauna ni tevoro” (time of the devil). The ferocity of the cannibal lifestyle deterred European sailors from going near Fijian waters, giving Fiji the name Cannibal Isles; as a result, Fiji remained unknown to the rest of the world. 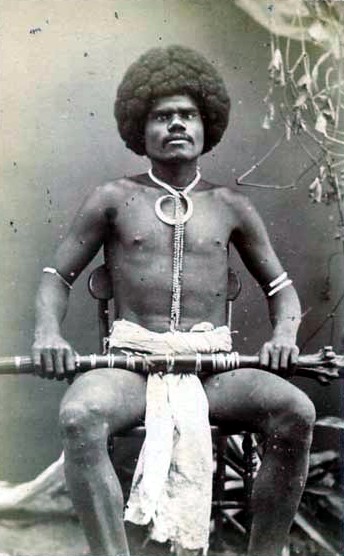 Yikes. Doesn’t sound like paradise to me. Also, as you can see, the title for my work of historical fiction and horror translates as “Time of the Devil,” which I found appropriate.

According to the same source, Dutch explorer Abel Tasman visited Fiji in 1643 and apparently lived to tell the tale. The first Europeans to settle in Fiji were beachcombers, missionaries, and whalers.

I’ve written eight chapters in my Sean Becker vampire series plus a number of “side tales” based on the same “universe.” I have introduced formal societies both of vampires and of vampire hunters. In the 20th and 21st century western nations, the Holy Order of vampire slayers is called “Van Helsing” after a fictional character in Bram Stoker’s 1897 novel “Dracula.” Earlier, including in the 17th century when this story is set, I gave them the name “Holy Order of Venandi” with “Venandi” meaning “hunter” in Latin (the best I could come up with…if someone more familiar with Catholicism can create a better name for a fictional order of fanatical vampire hunters, let me know).

I’m fascinated about how widely the legend of vampire-like creatures has spread and how far back in history they can be traced. Almost every human civilization and culture knows of vampires by one name or another. Vampire-like creatures of the island chain Vanuatu were called Talamaur. They weren’t bloodsuckers in the traditional “Dracula” vein, but they were close enough so I thought I could get away with “tweaking” the folklore.

Vanuatu is about 750 miles from Fiji and there is some evidence that ancient Polynesian people were able to make long sea voyages and settle on islands very distant from their origins. I don’t think it’s too much of a stretch to have a Talamaur arrive on Fiji in or before the 17th century (it is believed Fiji was settled between 3500 and 1000 BCE) and become a local chief.

Oh, in case you’re interested, the weather in Suva, Fiji today predicts thunderstorms with a high in the mid-80s F and a low in the mid 70s. Pretty humid and I doubt you’d be able to work on your tan.