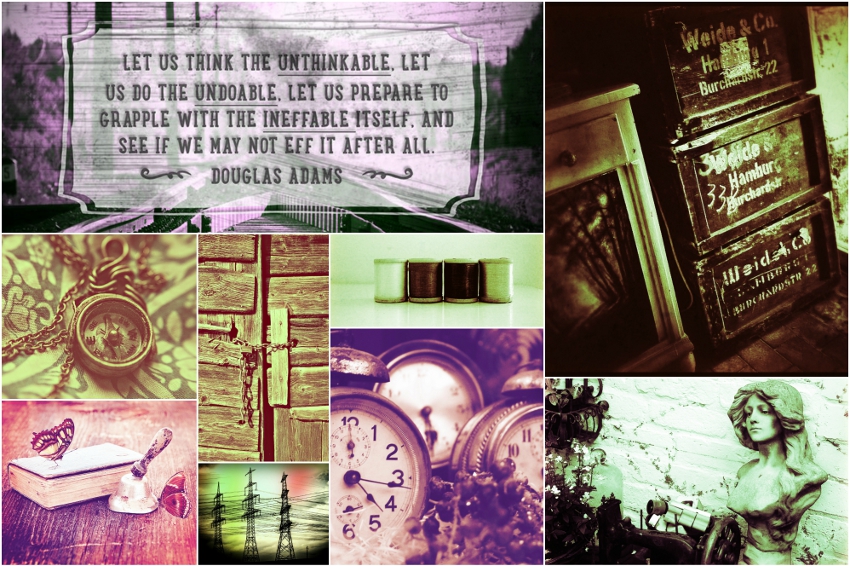 There was only one way for Adriene McKnight to follow Douglas Adams’s advice and that was to step out of the timestream. She’d never done it completely, of course, because then she’d lose all recognizable references and never get back, but she could exit the local stream far enough to let her see several others connected to her own.

Opa’s study. He had everything packed up to leave for England. It’s 1934 and the Nazis have made Hamburg an administrative Gau. He wasn’t her Opa then, only a young physician of 23, unmarried, and unwilling to become a pawn of the fascists.

The bust of Oma. She was so beautiful. Opa commissioned it as a wedding gift, only one of twelve female busts made by the famous Erik Van Aar. The sculptor died a year later making the bust worth a fortune. Opa wouldn’t sell it, even when he needed money to go to America in 1940.

Mama’s sewing thread. Adriene would always get into her sewing kit as a child, making Mama furious. Mama was so meticulous, and as a child, Adriene was such a scamp and a klutz. Mama kept the little compass Opa gave her when she was little in the kit rather than her jewelry box. It artificially gave Adri a sense order knowing which way was north, and she imagined herself standing directly on top of the magnetic pole just so she could watch the needle madly spin in circles.

The clocks were running down, so she had to hurry.

Powerlines. Papa worked for Con Edison when Adri was a child. He was an electrical engineer. Mama wanted her daughter to study humanities, but she was more like her Papa, always taking things apart and trying to reconstruct them in different ways, more at home with an algebra text and a slide rule than Frost or Keats.

There was Mama’s favorite book. The bell had been melted when their apartment caught fire, but fortunately no one got hurt. That was the day Adriene discovered she could become unstuck from the timestream. She was only nine and it was both terrifying and exhilarating. She went back and saw what started the fire, and then went forward after it was out. She “restuck” in the present in time to wake up Mama and Papa and tell them an electrical short in one of the lamps had started a fire in the living room.

The fire was small enough for Papa to hold at bay long enough for the Firemen to arrive.

Mama’s book and bell were visited by butterflies only once, and that was after they moved to California and were picnicking near Shasta Lake.

The locked barn door. It wasn’t really a barn or a door exactly, it was the gateway outside of reality, the portal into the unthinkable, the undoable, the ineffable. She thought it was the gate to Heaven or the entrance to God’s private study.

Adriene had miscarried three times before she was able to give birth to her beautiful baby boy. He lived only four months, and she’d found his tiny, lifeless body in his crib one morning. It was the only morning when, after her husband had gone to work, she decided to go back to bed. If she hadn’t…if she’d stayed awake and checked on little Oliver…

She tried to unstick herself and go back an hour earlier on that morning, but she couldn’t. Something in the local stream wouldn’t let her. She’d never tried to prevent a death before, and it was a lot harder than waking up Papa and Mama so they could stop the fire from making them homeless.

Adriene couldn’t save her little boy’s life in the local timestream, so she was going outside it. Even if she lost herself and never came back, it would be better than staying in the world without Oliver.

Today, she would break the chain and make the universe, eternity, or God give Adriene her baby back.

I wrote this for the Sunday Writing Prompt “Collage Prompt 40” challenge hosted at Mindlovemisery’s Menagerie. The idea is to use the various words and images in the collage as the inspiration for crafting a poem, short story, or other creative work.

My story sort of created itself as I attended to one image after the next starting with the Adams quote, and spans three generations (four if you count Oliver). Of course no one has gone through the door Adriene is contemplating and returned to tell about it (depending on your theological and mystical perspectives), so it’s a very big question as to whether she can either restore Oliver’s life or prevent him from dying in the first place.

11 thoughts on “Behind the Eternity Door”