If you read my February blog post “Blood Heir” and Social Justice (or is it vengeance) which echoed many other voices on the web, you’ll recall how author Amélie Wen Zhao was bullied on social media to pull her book Blood Heir from publication over what Slate.com author Aja Hoggatt called accusations of racism and being “anti-black”.

Tablet Magazine called her detractors a twitter mob composed of what’s been referred to as “YA Twitter:”

an online community composed of authors, editors, agents, reviewers, and readers that appears to skew significantly older than the actual readership for the popular genre of young adult fiction, which is roughly half teens and half adults.

The Tablet article goes on to say:

As Kat Rosenfield, a Tablet writer who is herself a published YA author, wrote in a deeply entertaining Vulture feature on The Toxic Drama on YA Twitter, in the summer of 2017, “Young-adult books are being targeted in intense social media callouts, draggings, and pile-ons—sometimes before anybody’s even read them.”

Even though the author defended herself and explained the cultural context (her own) that inspired her novel, she was dragged through the virtual gutters and intimidated into indefinitely delaying the release of her book. She’s an excellent example of having apologized when, objectively, she really didn’t do anything wrong except cross paths with the YA twitter “powers that be.”

Then I found something that I put in my own twitter feed: 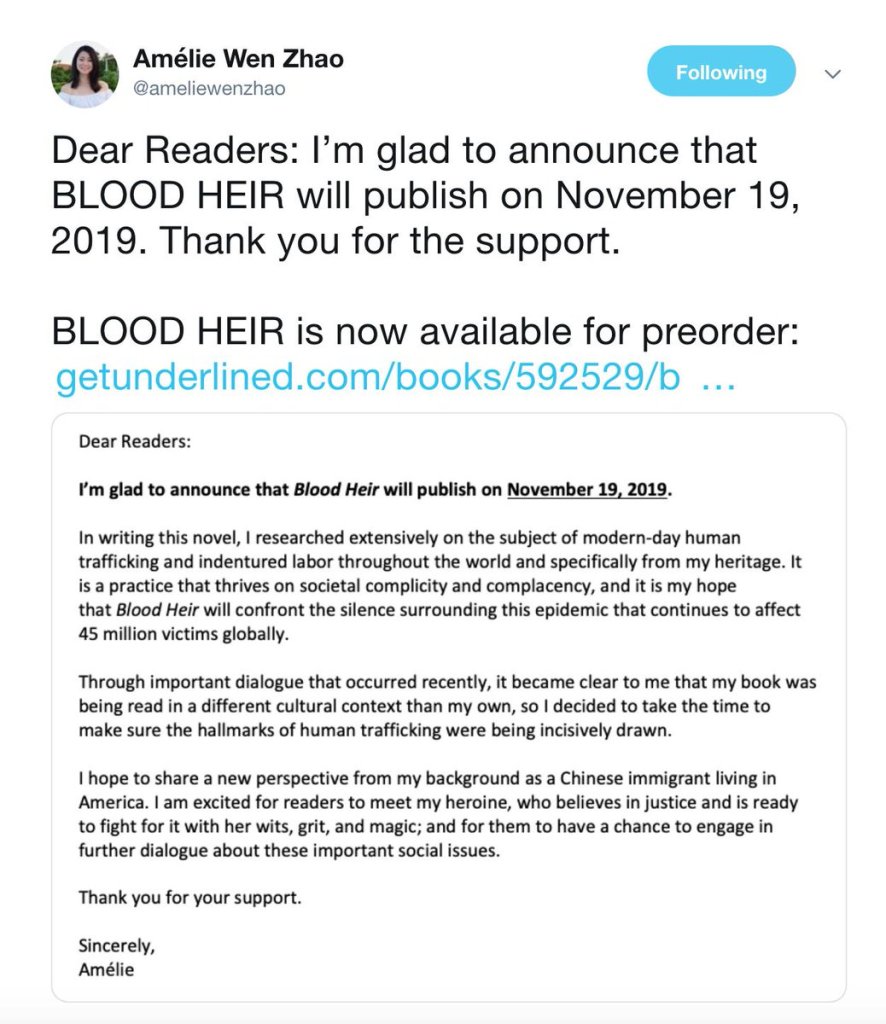 That’s right. The book is coming out this November, and I for one will be buying a copy. In all reality, I probably wouldn’t under the usual circumstances, but when that many swollen-ego bullies come out against one lone first-time author and attempt to smash her dreams for what amounts to no good reason, I’m going to support that author. This is what happen when so called “social justice outrage” gloriously backfires.

Why am I writing this now?

We all have dreams. I sometimes get discouraged in pursuing my own. I was driving the other day and happened to see a license plate frame with the message “Fight For Your Dreams.” It reminded me that life isn’t easy and people can be cruel, but that doesn’t mean we should give up. Resistance is not futile, and in fact, it’s absolutely necessary in order to become stronger. I’m glad Ms. Wen Zhao resisted the bullies and the control freaks who tolerate no outsiders and who will look for totally bogus excuses to inflate their own sense of justice and righteousness.

Fight for what you believe in. Sure, make a moral and ethical inventory of what those beliefs espouse. If you’re wrong, admit it and choose another path, but if you’re right, don’t let the Visigoths and the philistines choose your path for you. False authorities, experts, and ivory tower elites rear their ugly heads all the time. They’re really just trolls who live under a dank and dark bridge, preying on the hapless. There’s a way to fight them. Just don’t feed the trolls.

“Blood Heir” is available for pre-order now at Amazon for delivery November 19, 2019. What are you waiting for?