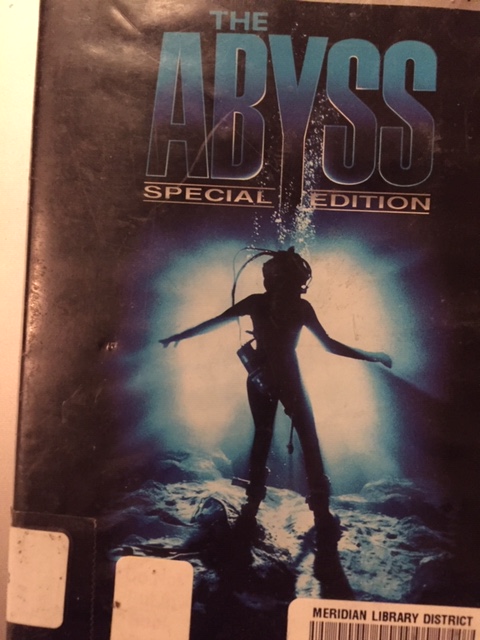 I hadn’t intended to watch a film on Sunday evening, but saw a DVD of the 1989 film The Abyss and said, “why not?”

Actually, this is the special edition, so it’s expanded quite a bit from what folks saw in the original theatrical production.

The movie opens aboard the USS Montana, an Ohio-class U.S. Navy sub. The sub encounters some strange light apparition near the Cayman Trough and, caught in its wake, is dragged across a rock formation, fatally damaging the sub.

With Soviet ships closing in to salvage the nuclear submarine, the Navy commandeers a private, underwater drilling platform operating near the Trough that’s led by Foreman Bud Brigman (Ed Harris) and crewed by a bunch of roughneck oil drillers.

Brigman’s estranged wife Lindsey (Mary Elizabeth Mastrantonio), who designed the drilling rig, accompanies a group of Navy SEALs commanded by Lieutenant Hiram Coffey (Michael Biehn) down to the rig just before a hurricane hits, in an attempt to reach the Montana and search for survivors.

As the film progresses, it becomes apparent that the SEALs have another mission, retrieving and arming one of the submarine’s nuclear warheads. This was a part of the film that still confuses me. What did they think they were going to do with it?

Topside, the sinking of the Montana is only one of many events that is steering America and other powers toward global nuclear war.

After the rescue operation finds no survivors, and with the hurricane making it impossible for anyone to return to the surface, Coffey takes one of the rig’s submersibles and retrieves a warhead. Unfortunately, the crew needed that craft to disconnect the umbilical to the surface platform. When the hurricane hits, it rips the rigging off of the surface vessel, dropping it into the Trough. This drags the rig to the edge but not into it.

During the initial rescue mission, Lindsey, in a submersible, experiences a power failure and sees a strange object emitting a soft light. When it leaves, her power is restored, and she later calls the phenomenon a “non-terrestrial intelligence” (NTI).

The NTI apparently can manipulate sea water and sends a sort of water tentacle into the rig. It behaves mainly with curiosity and the crew even appears amused by it. Coffey, who is suffering from high-pressure nervous syndrome (yes, it’s a thing), is becoming increasingly paranoid, and whatever plans the Navy had for the nuclear device, he decides to drop it into the Trough, thinking the object is some sort of Soviet submarine.

As it was being dragged toward the Trough, the rig was damaged and partially flooded killing several of the crew and some of the SEALs.

As Coffey steals a submersible taking the armed warhead with him, Bud and Lindsey give chase. Only two SEALS remain on board, one being captured while the other is sympathetic with the crew and offers to help.

Coffey manages to send the warhead over the edge, but his craft is pulled in as well, and is crushed by the tremendous pressure.

Bud and Lindsey’s craft is critically damaged and begins flooding. Bud is the only one wearing a diving suit and Lindsey opts for undergoing deep hypothermia in the ocean’s depths hoping to be revived when Bud gets her back to the rig.

Impossibly, that actually works and she seems to suffer no ill-effects.

The remaining Navy SEAL helps Bud don a diving suit equipped to provide a liquid breathing medium which will enable him to dive into the impossible depths of the Trough to disarm the nuclear device.

He undergoes tremendous shock, but is tethered to reality by Lindsey’s voice over the radio. The SEAL talks Bud through the disarming process, but he doesn’t have enough oxygen to get back up in time. He texts Lindsey that he knew it was a one-way ticket and that he loves her.

At the last minute, a group of NTIs rescue Bud, take him aboard one of their alien craft, and provide him with a breathing space. In the extended version of the film, they show him television broadcasts of the impending war and the general violence of humanity. Using their ability to manipulate the sea, they send huge megatsunamis that threaten every coastal area of the world.

Then they stop, showing Bud his text messages to Lindsey, indicating that his love for her and his willingness to sacrifice his life to save them changed their minds.

In the last scene, the aliens lift the entire rig plus several other ships to the surface, now that the hurricane has passed.

Okay, the whole “I hate you” to “I love you” between Bud and Lindsey because of an extraordinary event echoes just about every romantic comedy I’ve ever seen and was pretty predictable.

I was expecting the movie to be darker, with the undersea creatures being menacing. This was more like “Close Encounters of the Third Kind” but underwater. It also had the flavor of Gene Roddenberry’s original concept for Star Trek; an encounter with aliens that resulted in peace for all humanity. At least that’s what the film’s ending implies.

Filmmaker James Cameron seems to love working with actor Michael Biehn, since we also see Biehn in his films The Terminator (1984) and Aliens (1986).

I love a good, underwater adventure. This was was pretty good, but for some reason, I keep feeling it’s missing something. Maybe I just wanted the aliens to be more edgy.