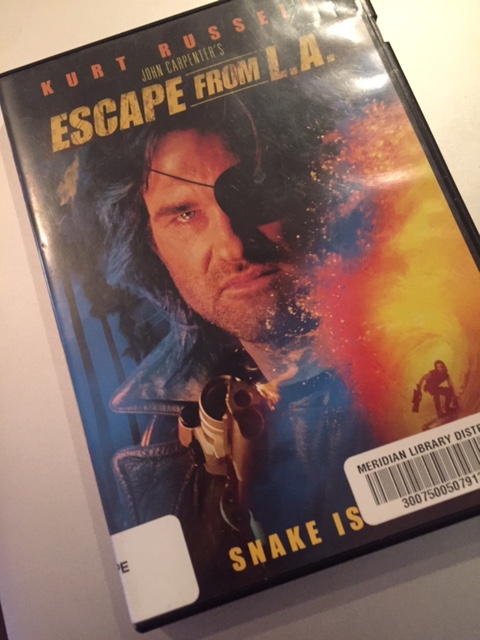 © James Pyles – photo of DVD case for the movie “Escape from L.A.”

I saw John Carpenter’s 1981 film Escape From New York starring Kurt Russell, Lee Van Cleef, and Adrienne Barbeau when it was first in the theaters and then a few times on disc later. It’s what I consider a “high functioning B movie.” That means it’s a lot of fun, but in spite of the quality actors in the movie, it would attain no higher level than “cult classic.” It’s a good way to waste two hours.

I’ve been aware of the 1996 sequel Escape from L.A. for years, but never had the desire to see it. However, yesterday at my local public library, I found it on disc and figured “what the heck.”

Actually, given the quality of the story of the original, and that sequels almost never live up to the original, I expected to either be bored or to hate it.

I hadn’t realized the sequel was filmed so many years after the original. Maybe Kurt Russell or John Carpenter needed the money. Who knows?

Russel reprises his role as “Snake” Plisskin and he looked fabulous in the role. I was amazed that there was such a quality cast.

Steve Buscemi plays Eddie, a sort of Beverly Hills tour guide who won’t shut up. Peter Fonda, of all people, plays an almost childlike aging surfer named Pipeline. Cliff Robertson is cast as a hyper-religious fanatical President for life. Stacy Keach is Commander Malloy, the head of the police force that surrounds the island of Los Angeles (more on that in a minute), and Michelle Forbes is his lieutenant Brazen. I always wondered what happened to Forbes, who had a recurring role as Ensign Ro on Star Trek: The Next Generation, after that show ended.

Anyway, the plot is that a crime ridden Los Angeles is hit by a massive earthquake in the year 2000 and everything between Malibu and Anaheim becomes an island. In the wake of this disaster, the President is made a sort of “dictator for life” who immediately bans “tobacco, alcoholic beverages, recreational drugs, red meat, firearms, profanity, atheism, freedom of religion, and extramarital sex.” as part of his “Moral America” initiative. Anyone found guilty of committing a “moral crime” is stripped of their American citizenship and exiled to the prison island of Los Angeles forever. Even being a runaway teen gets that sentence, although the condemned are also offered the opportunity to repent and be immediately executed by electric chair.

I know this movie was made over twenty years ago, but I can see that the critics of President Trump could view this film as a sort of predictive indicator of what they see the President doing or about to do. I mean the parallels were astounding, though I can only imagine the filmmakers styled Robertson’s character more on Jerry Falwell.

The President’s daughter Utopia (A.J. Langer) steals the controls to Daddy’s series of satellites which are capable of sending out an EMP pulse that would destroy the electronics of all of America’s enemies (which in this movie is everyone) and takes it to her lover, a Latin revolutionary named Cuervo Jones (Georges Corraface) in L.A.

Snake is again arrested for moral crimes, but is promised freedom if he’ll go into L.A., locate the control box, and return it to the President. He’s injected with a poison that will kill him in ten hours, so he’s forced to comply, just like in the “New York” movie.

Typical mayhem ensues once Snake arrives in L.A., but he loses his one-person submarine in the process. He meets a collection of very colorful characters and goes through harrowing adventures. He does meet one, seemingly innocent young woman who he rescues from body part salvagers, but she ends up needlessly shot to death on a freeway.

There are plenty of double-crosses, both in and against Snake’s favor.

Idiotically, the “gladiator game” he’s forced to play by the bad guy is one-man basketball. He must score a total of ten points running back and forth across the court in a short amount of time or be machine gunned to death.

Astonishingly, he makes his goals, but Jones orders him killed anyway.

Snake escapes, almost gets away with the controls, is betrayed, shot, escapes again, surfs back into L.A. with Pipeline, captures Eddie, finds an old ally and rival of Jones named Hershe Las Palmas (Pam Greer), and raids Jones’ landing platform at “Happy Kingdom at the Sea” in Anaheim. I guess Disneyland wouldn’t let Carpenter use their brand.

Oh, did I mention that several Latin American nations were on the verge of invading the U.S. and the President needed his controller to wipe out the electronics of those governments, sending them back into the Dark Ages? No? Oops.

Jones had arranged to be picked up by government helicopter and taken out of L.A. with Utopia. In exchange for his freedom, he returns to control box. If he isn’t freed, he threatens to wipe out America’s technology.

Naturally, Snake foils his plot, escapes with Utopia and his allies, except Eddie jumps out when the chopper is hit by a missle, setting it on fire.

Everyone on board is killed except Snake and Utopia. During the adventure, a duplicate fake control box is discovered. As the helicopter crash lands outside the police compound, he gives Utopia one and tells her to jump out. The President had ordered Snake to murder her as a traitor, but he didn’t have it in him.

With less than two minutes until the poison is supposed to kill him, he gets out of the flaming chopper to be met by the President, Malloy and their police henchmen.

Oh, did I mention that Hershe told Snake the poison was a fake. It was. He was in no danger of dying at all.

Utopia is captured and figuring Snake had slipped her the real control box, the President uses it. Turns out not only was that box the fake, but Snake had used a holographic projector he had been armed with by Malloy for the mission. He wasn’t within half a mile of the crash. Hidden in a forest, in his last act of defiance before disappearing forever, he uses the real control box to destroy all of the electronic technology world wide like a global reset button.

The lights go out, Snake finds a half spent pack of cigarettes and enjoys a smoke, and the show’s over.

What did I think? It was a good way to kill a couple of hours if you have nothing better to do. In spite of the acting talent, the characters, most of them anyway, were two-dimensional. They were probably played that way deliberately, since this was more an action-adventure romp than a serious commentary. I hope Russell had fun reprising his role as Snake. After all, this time around, he got to destroy the world.

Oh yeah, the plot was totally predictable. It was still fun for the most part.