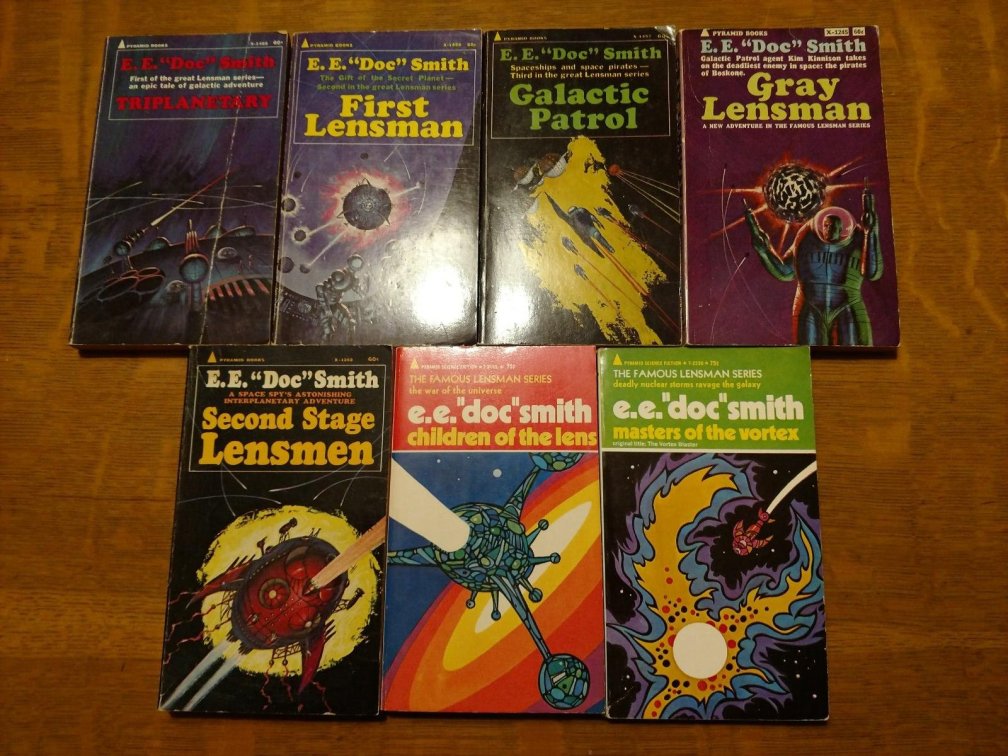 But “Doc” Smith’s space operas form the basis of what we call science fiction today, and they were an influence on such luminaries as Isaac Asimov and Robert Heinlein. In the current world of Coronavirus, and having time on my hands at work, I managed to get through “Triplanetary,” and even started the next book in the series The First Lensman.

Modern audiences for this novel will only likely read it for its historical significance within the context of larger SciFi. While Smith’s action sequences have been praised compared to many of his contemporaries, his science was tolerable at best and ridiculous at worst. The hero was what I’d refer to as a Marty Stu, the male counterpart of Mary Sue, a perfect fictional character who makes no mistakes, has no flaws, and for whom, everything is incredibly easy. The Star Wars character Rey has been accused of being a “Mary Sue”, although depending on where you sit relative to the current wave of feminism, that allegation is under dispute.

Actually, that’s another important reason to read the “Lensmen” series, because it’s the first space opera, and all other space operas, including “Star Wars”, follow in its footsteps.

Our main character, Conway Costigan, pretends to be a passenger on a spaceliner, but is really a Triplanetary spy, assigned to discover and stop the space pirates who have been raiding other spacecraft near Jupiter. Costigan meets and falls in love with fellow passenger Clio Marsden (I pictured her as Fay Wray, but any classic 1930s starlet will do). When the ship is sabotaged, and then attacked by the raiders, Costigan, Marsden, and the ship’s commander Captain Bradley, are captured by the pirate leader Gray Roger. They manage to escape (before Roger introduces Clio to the traditional “fate worse than death”), but then, aliens from another part of the galaxy, who fuel their star drives with (from their point of view is) rare iron, attack.

They capture the heroic trio who have made off with a small spaceship from Roger’s hidden planetoid, and thinking them low intelligence beings, spirit them away back to their planet, along with enough iron (from destroying much of the pirate and Triplanetary space fleets) to power their spacecraft for a lifetime.

After many heroic attempts to escape, most of which fail, Costigan and crew make off with another spacecraft and try to find Earth. Meanwhile, the advanced Triplanetary police ship “Boise” defeats one alien spaceship that attacks the city of Pittsburgh, and then traveling faster than light, attempts to rescue Costigan’s party.

The aliens are strange amphibians who live on a water world and are at war with another more fish-like species living in their “deeps.” Their ships look like fish, and otherwise the world creation seems a little lazy.

The romance sequences are cringe worthy, but as I recall, Smith commissioned the wife of a friend to write those parts. He probably couldn’t have done much worse himself.

Eventually, Costigan makes peace with the alien leader and they enter into a trade agreement.

The novel is a soft setup for the rest of the Lensmen series, although most of the characters have little or nothing to do with what follows. In fact, you don’t learn the real identity of Gray Roger until the next novel, which explains much of the backstory involving his character and why that’s important going forward with “Lensmen.”

Smith seemed to like the idea of a space police force, with “Triplanetary” being responsible for our Solar System, and “Lensmen” going much farther in patrolling the galaxy.

One of the saving graces is that this book series, or much of it, is available via Project Gutenberg due to these novels being free of their original copyrights. Free books, people.

I’m going to keep reading through this series, again in the vein of exploring the history of science fiction and Smith’s inestimable contribution. It’s a great way to travel back in time and be 14 again.

Oh, the covers at the top (most of them, anyway) were the ones from the late 1960s editions, and from my point of view, they’re some of the best SciFi cover art in existence.

2 thoughts on “Book Review of “Triplanetary,” the Beginning of the “Lensmen” Series”