On the heels of my blog posts Looks Like the 2020 Hugo Awards Once Again Sucked, Loving and Fearing SF/F Fandom, and the currently highly popular Is SciFi Author/Editor Robert Silverberg Really Racist and Sexist (or has the internet once again lost its mind)?, a library book I just finished and am about to return caught my attention.

Written by Orson Scott Card (Ender’s Game, Speaker for the Dead) the small book How to Write Science Fiction & Fantasy was my choice to re-read in the hopes of dragging myself out of my current writing slump.

Published in 2001, all of the advice about how to publish, market, and, of course, win awards (Card won two Hugos, a Nebula, a Lotus, and in 1978, the John W. Campbell [now renamed Astounding] Award for Best New Writer) are outdated and useless.

But his lessons on how to write remain pretty much timeless, especially when you are actually learning the craft rather than trying to promote a social position, attitude, or bias (I say that knowing that all stories contain the biases of their authors, but lately, it’s gotten so much more obvious and even blatant).

END_OF_DOCUMENT_TOKEN_TO_BE_REPLACED

It’s too late for me to use this option (probably), but an incident (two, actually) occurred last week that got me to thinking.

I’ve already considered the idea that breaking into science fiction and fantasy as a conservative, religious, white, married, cisgender old man (and if you exist at a particular social and political extreme, all of that means I’m “evil”) might be a waste of time considering how the publishing industry in particular, and entertainment in general seems fairly prejudiced against creators who aren’t leftists and atheists (although I know some leftists who are religious). In science fiction in particular, this was played out in previous years by the Sad Puppies phenomenon, and not too long ago by the Comicsgate movement, which also seems to have gone by the wayside.

But as I mentioned, last week, a person responded to two of my missives on Facebook rather negatively. Normally, I take these things in stride, since “outrage” is something you get used to if you’re not following a popular social media narrative, but this time the person in question was in a position to significantly inhibit my future as an author, at least within a certain realm.

I won’t provide the specifics of this, but I will confess to having my anxiety level rise quite a bit and losing some sleep over it.

END_OF_DOCUMENT_TOKEN_TO_BE_REPLACED

Okay, so in doing research to respond to some of the readers of my flash fiction story We Don’t Want Your Kind Here, I had to revisit my essay Who is a Nazi and Why Should I Care?. This led me to search the #WorldCon76 and #WorldCon2018 twitter hashtags for any mention of Nazis, which led me to this twitter conversation by Patrick S. Tomlinson (here’s one of his books on Amazon), and the screenshots below: 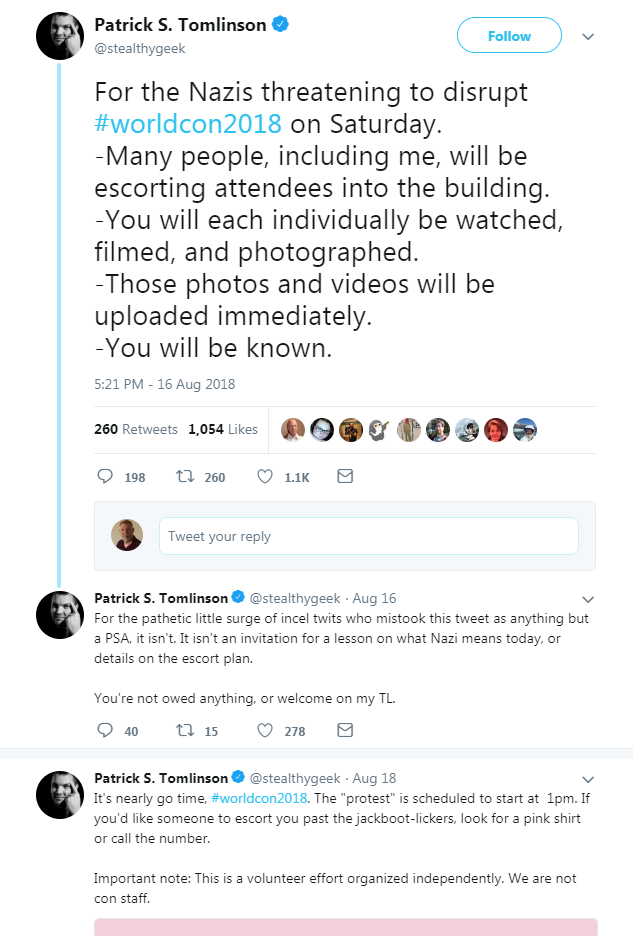 Yeah, what a great guy, huh (However, if the allegation that the protesters deliberately were blocking access to a bloodmobile was true, I’d have a problem with it, too)?

END_OF_DOCUMENT_TOKEN_TO_BE_REPLACED

What started all this was a post by conservative speculative fiction writer Jon Del Arroz at the SuperversiveSF blog called My Post Mocking Feminism Goes Viral – Twitter Locks My Account. Apparently, his twitter account was temporarily locked again, this time for mocking something called National No Bra Day which is supposed to raise awareness about breast cancer by having women go braless (sort of like No-Shave November). This year, the event is on Saturday, October 13th, which makes it odd that anyone would bring up the topic now. Anyway, here’s Del Arroz’s tweet for your consideration.

If you go to Mr. Del Arroz’s blog, you’ll see that he is frequently critical of leftist and progressive causes, and leftist speculative fiction author Jim C. Hines went so far as to post a lengthy missive on his blog chronicling, in great detail, a list of Del Arroz’s supposed “trolling and harassing.”

On the other hand, I’ve been assured by numerous people who I respect that Del Arroz is being treated unfairly by a number of authors (such as Mr. Hines), and particularly by several Cons (conventions) for his religious and political views.

END_OF_DOCUMENT_TOKEN_TO_BE_REPLACED 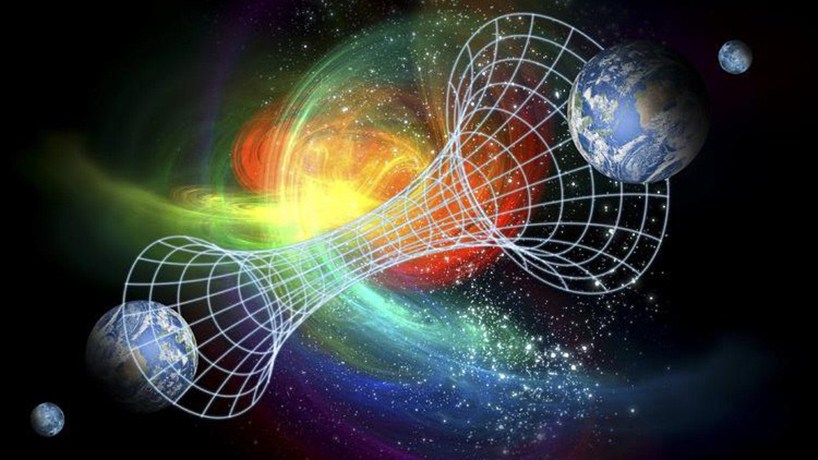 Found at numerous publications including TrendInTech.com – Not image credit available

I just finished reading a blog post called Of Permanent Things, Part II written by my friend and Holocaust educator Dan Hennessy. It reminded me of the importance of including religious and spiritual themes in fiction writing, including science (speculative) fiction and fantasy.

I’m in the process of producing first drafts of two novels. The first is about five children mysteriously transported into a fantasy world of dragons, demons, and elves having to undergo a heroic journey and facing danger and adventure at every turn. The second is about a fifteen-year-old African-American girl taking up her recently deceased Grandpa’s journey into a Steampunk world in order to help a younger version of her Grandpa stop a corrupt tycoon from destroying both of their universes.

While I don’t make it explicit in the fantasy novel, the five Davidson children are Jewish. No, they’re not observant, and aside from the occasional mention of praying (usually when the situation is very grim), I have, at best, cast them in the role of Reform Jews. Why I’ve made them Jewish as opposed to generic “white kids” will become apparent only in the latter portion of the third novel where their journey will be finally resolved.

END_OF_DOCUMENT_TOKEN_TO_BE_REPLACED

I read a wide variety of information sources, including conservative and liberal news, social media, and blogging outlets, in an effort to stay informed. I find that no one bias tends to render the world as it truly exists (in my opinion), so I try to find a balance between them all.

Finding that balance isn’t easy, since the creators of these information sources don’t seem to want to understand any viewpoint that differs even slightly from their own.

Okay, that probably isn’t fair, but that’s how it seems as I do my reading.

I put an image at the top of this blog post to illustrate the relative biases of the significant news agencies (I don’t necessarily agree with the exact positioning of some of these “elements,” but overall, it’s a pretty good indicator).