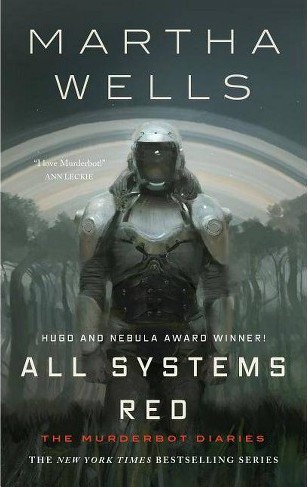 Cover art for “All Systems Red” by Martha Wells

First the “official reviews” including praise for the author’s other works:

“The Murderbot series is a heart-pounding thriller that never lets up, but it’s also one of the most humane portraits of a nonhuman I’ve ever read. Come for the gunfights on other planets, but stay for the finely drawn portrait of a deadly robot whose smartass goodness will give you hope for the future of humanity.” ―Annalee Newitz, author of Autonomous

“Clever, inventive, brutal when it needs to be, and compassionate without ever being sentimental.” ―Kate Elliott, author of the Spirit Walker trilogy

“Endearing, funny, action-packed, and murderous.” ―Kameron Hurley, author of The Stars are Legion

“Not only a fun, fast-paced space-thriller, but also a sharp, sometimes moving character study that will resonate with introverts even if they’re not lethal AI machines.” ―Malka Older, author of Infomocracy

“We are all a little bit Murderbot.”―NPR

“Wells gives depth to a rousing but basically familiar action plot by turning it into the vehicle by which SecUnit engages with its own rigorously denied humanity.” ―Publishers Weekly starred review

“I already can’t wait for the next one.” ―The Verge

“A great kick-off for a continuing series.” ―Locus

“Wells imbued Murderbot with extraordinary humanity, and while this is a fun read, don’t make the mistake of thinking it’s not a profound one.”―LA Times

“The Cloud Roads has wildly original world-building, diverse and engaging characters, and a thrilling adventure plot. It’s that rarest of fantasies: fresh and surprising, with a story that doesn’t go where ten thousand others have gone before. I can’t wait for my next chance to visit the Three Worlds!” ―N. K. Jemisin, author of The Hundred Thousand Kingdoms

And as far as author Martha Wells’ awards:

I’ve been here before. I’ve been at the start of reading a novel by an award winning author, a novel that garnered high praise from the professional publishing community…

…and I’ve been bitterly disappointed (including by several of whom are represented above in offering accolades to Wells).

Not so with All Systems Red. I loved it from beginning to end. I loved almost everything about it. The tale presented a unique view of a humanoid/cyborg AI who called itself “murderbot.” Except instead of killing, it would rather do the moral equivalent of binge watching shows on a streaming service, and it absolutely hated interacting with people.

The murderbot, however, was human enough to be the most intriguing character in the story.

The action might have settled into all too familiar tropes, but Wells’ kept me engaged with the SecUnit’s perceptions. The mystery involved almost didn’t seem the point, because the SecUnit didn’t care that much, or at least it said it didn’t.

Turns out to be a lie, even if the SecUnit was lying to itself, because being autonomous, and illegally so, it could have chosen to throw its humans to the proverbial wolves and it didn’t.

At 155, pages and with snappy pacing, it’s a quick read, and apparently an introduction to the world according to SecUnit (the sequels).

And thereby hangs the real tale and tragedy of this series.

There are (so far) six books in the “murderbot diaries,” each one being between 156 and 170 pages long. The first book costs a modest three dollars and change, but to buy the rest of the books will cost you over ten bucks a pop. That’s the same basic strategy used to get someone addicted to a drug and then strung out. Make the first buy cheap and then they’ll pay anything after that to keep going.

Assuming this was Wells’ idea (and even if it was the publisher’s idea and not hers, she went along with it), it’s kind of crummy (and a cheap shot on Tor‘s part). That’s well over $50 for, with all six put together, is a novel-length work. That’s really expensive for a novel.

Too bad, because the story was rock solid and I want to read more.

Disclosure: I downloaded the first four books for free from Tor. They do that to promote a soon-to-be-published sequel. After I finish reading the other three, if I want to see what happens next, I won’t have to stretch my budget too badly, I guess.

Oh, congratulations Martha on being the first award winning and well reviewed SF/F author I’ve read in years who I thought actually deserved the hype. So many of your contemporaries (in my humble opinion) don’t.

Here’s my review on Amazon.