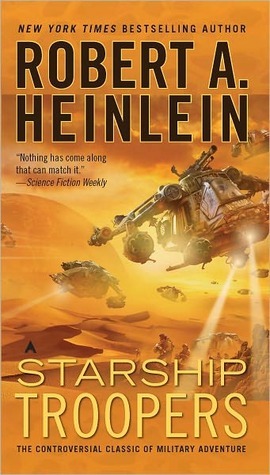 I decided to re-read Robert Heinlein’s 1959 classic Starship Troopers (I probably last read it sometime in the late 1960s or early 70s) because science fiction writer Neal Asher‘s book Prador Moon (which I recently reviewed) was unfavorably compared to it by a few Amazon readers.

I must say Heinlein doesn’t disappoint. “Troopers” remains timeless, or nearly so, but as I understand it (I wouldn’t have picked up on this as a teenager), even in the late 1950s (and so much more now), the book was considered to have numerous controversial elements.

Yes, the idea that only military veterans are allowed to be full citizens with voting rights does go against the grain. However, this novel was Heinlein’s breakout book from “Young Adults” novels. Thus, Heinlein injected (supposedly) his personal perspectives into the world he created. His reasoning relative to citizenship is only a soldier, who is willing to give up his (all ground troops are males and most Navy pilots are females) life for the many of society has the moral and ethical perspective to casts a vote in that society. It’s also why he advocates for a volunteer only Army rather than a draft or compulsory military service for everyone. A volunteer willingly enters that world and can quit at any time during training. If the volunteer makes it to soldier, goes into combat, and remains, then they’ve established themselves as that ethical/moral model.

Addendum: Someone pointed out that I didn’t get the “citizenship” qualification just right. Here’s the correction:
The citizenship requirement is “not less than 2 years of Federal Service”. While most of this is military, it’s explicitly stated that, if you want to sign up, they have to take you. I believe the example from the book is something about “counting the hairs on a caterpillar, by touch, or something equally silly”. I only mention this because it’s often assumed that, in the ST universe, only the able bodied are eligible for citizenship.

The idea of youth crime and crime in general being responded to by swift, harsh punishment (public floggings) is another area that may be difficult for some to swallow. The book considered 20th century penal standards (as of 1959) to lenient and soft, resulting in an epidemic of repeat offenders and societal mixed messages about “understanding” criminal behavior. Heinlein seemed to believe that swift, sure consequences for crime, up to and including the death penalty, would lead to a more peaceful society.

As I mentioned, military service was strictly segregated between men and women. If written today, there would probably be more of a mix. While men are shown as definitely appreciating women, there is not a lot of interaction and no sexual scenes alluded to. Men have their skill sets and women have theirs, so in the military, they are both highly valued but rarely fraternize.

The protagonist, Juan “Johnny” Rico, is the eyes and ears of the story, and while there is a brief mention of him speaking Spanish and a Filipino fellow trooper speaking Tagalog, there is no other mention of race or ethnicity in the book. Today, such distinctions might be more highlighted, and some science fiction authors in the 21st century would probably make those issues the overriding focus of the novel. While Heinlein establishes “distinctions,” there are more differences between being “Terran” and “Colonial” than there are with race or ethnicity. A citizen is a citizen and a civilian is a civilian.

One interesting aspect is “the enemy.” The “Bugs” are roughly spider-like, somewhat larger than a person, and totally incomprehensible. They are organized in a hive society and operated by central brain entities (think Star Trek’s Borg), but that’s about as far as we get “into” them.

Heinlein makes no attempt to present the Bug psychology, their perspectives, why they are at war, if they consider this a war at all by human standards, or anything else. They are the most alien aliens in science fiction, it seems. This is in stark contrast to Asher’s Pradors, which are somewhat crab-like, but presented as a fully realized society (brutal to the extreme) with individual personalities and motives, and interactive family and societal struggles. We may not always understand why Pradors do what they do, but the reader is given the opportunity to try.

The “Bugs” in “Troopers” remain a cypher even at the final page of the novel.

For a military SciFi book, about half of the pages are not devoted to combat. Rico largely chronicles his experiences in the military within the larger context of his culture. Heinlein uses training, human transactions, family bonds, considerations of the war and the “Bugs” as methods for commenting, not on Rico’s future, but our present (and what science fiction writer doesn’t do that?). That’s probably why so many more modern critics find the novel uncomfortable.

I hate to do this, but to see a list of the “controversies” attributed to “Troopers,”, you’ll have to visit Wikipedia.

However, just to be fair, I also pulled reviews from Tor, Muse with Me, and SFReviews.net.

The upshot for me and for most other reviewers and SF fans, is that while some elements of the novel have a rather “blunt” perspective, “Starship Troopers” is the Grandfather of all military science fiction stories to come after it.

I’ve never seen the 1997 film version of the book, mainly because I heard director Paul Verhoeven‘s cinematic atrocity died in the reviews.

Heinlein’s novel should have been translated onto the big screen more or less “as is,” and given the episodic nature of the writing, plus the lack of a definitive ending, could well be adapted to a television series. Whoever currently owns the rights to “Troopers” should pitch the idea.

As far as I’m concerned, “Starship Troopers” should be required reading for science fiction fans and authors alike. People lose something by disregarding the history of the genre many claim to love.

Addendum: February 27, 2021: Someone sent me a link to Roughnecks: Starship Troopers Chronicles on Facebook. A 1990s television adaptation on DVD. Might be interesting.