I just had an interesting “debate” on twitter. Someone I follow (and who doesn’t follow me) said something about the vaxx-denier at work being on again about the person in question getting vaccinated.

I’ve heard the word “denier” used more or less in the same context as “racist” or “child molester,” as if someone does not have the right to hold a different opinion on the topic, and doesn’t have the right to choose NOT to receive the COVID vaccine.

I didn’t respond to this person directly, but I did retweet his message as a quote and added one of my own. He responded and, as I said, because I like him (although I’m sure he thinks I’m the Son of Satan for being such a difficult human being) and generally think he’s a good person, I am paraphrasing him in the following image as he responds to me. 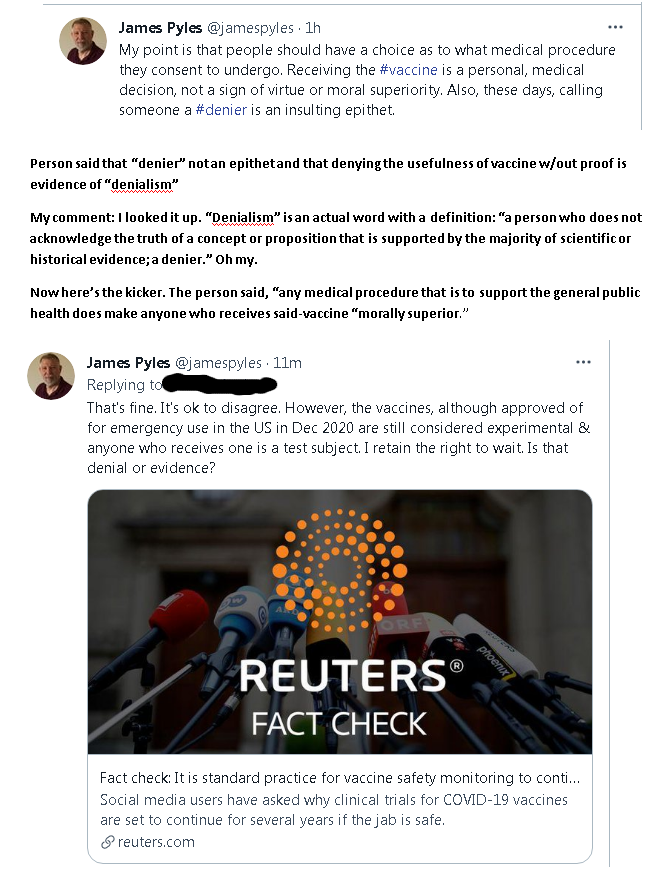 Here’s the link to the fact check by Reuters, a news agency which does firmly lean to the left (so the left can’t call it “fake news”): Fact check: It is standard practice for vaccine safety monitoring to continue after approval

At that point, he said he chose not to discuss this with me any further and I respected his wishes.

He may have made my point, though. I’m a “denier” as long as I don’t have evidence. But what if I do? I didn’t deny the general effectiveness of the vaccine based on the information we have so far (which is limited). I just said that the vaccines are still experimental and that anyone consenting to take one is a lab rat that will be kept under observation for a year or two. I didn’t even go into the vaccine side effects including deaths in Norway and elsewhere.

What about someone being “irresponsible” or even “morally inferior” if they choose not to be vaccinated? Must 100% of the human population be vaccinated in order for the “new normal” to raise up among us (and frankly, I’m holding out for the “old normal”)?

Not according to this: How Much of the Population Will Need to Be Vaccinated Until the Pandemic Is Over?

So from 20 to 50% of the general population can choose to remain “unvaccinated” and not be a horrible threat.

So I have evidence for my assertions. Is that what people are afraid of discussing?

Look, all I’m talking about is choice. If you choose of your own free will to be vaccinated against COVID, that’s fine and dandy. No complaint from me. My complaint is when people or organizations attempt to coerce a person into being vaccinated by insulting or shaming them as in “You’re a lousy denier” (and remember what I said “denier” equates to up at the top).

Get your vaccine as you will, but your will doesn’t mean you get to decide for everyone.

Oh, and surprisingly, so far, the individual in question hasn’t blocked me on twitter.

3 thoughts on “Are the COVID “Unvacciated” Deniers and Morally Inferior?”