I received quite a bit of feedback on my last blog post, mainly in social media. So when insomnia seized me by the throat tonight, I re-read some other “controversial” material I’d sampled earlier and figured, why not? I need to kill some time and let being sleepy overwhelm my anxiety (long story).

I follow the blog Bounding into Comics and yes it does come from a somewhat conservative place socially. While I periodically complain that the entertainment industry has forgotten how to entertain, they/it does have other characteristics. One can be found in the “Bounding” article Every Single Comic Book Character That Has Been Retconned To LGBTQ+.

No, I’m not going to rant about LGBTQ representation in comic books or anything else. The world is a diverse place and that will naturally be reflected in what we watch, read, and listen to. Any form of entertainment is a product of its times which is why making and then remaking a movie or TV show decades apart will yield two different products. Compare the original 1960s Lost in Space with the much more recent Netflix remake (which admittedly I’ve never watched, but I’m convinced the two shows must be very different from each other). It’s also why it’s reasonable to have gay characters in comic books today when you would never have found even one when I was growing up.

Getting back to the article, there are only six DC and Marvel characters listed out of hundreds or perhaps thousands of superheroes, so it’s not like it is a big deal. The complaint that author John F. Trent makes is that each and every one of these fictional people started out as totally straight characters. Every single one.

And every one was retconned to become bi or gay.

You might ask why comic book creators didn’t just make up new characters who would be LGBTQ from the start? The answer is that heroes who have become popular over many decades have a built-in readership (such as Bobby Drake/Iceman of the X-Men you see in the top most image). Therefore, even making a drastic change to the character’s sexuality and personality will grab and hold the attention of the fanbase with practically no effort. This is opposed to creating a brand new character, working hard to make that character popular both as a hero and as LGBTQ and hoping he/she/they won’t get lost in the shuffle. The path of least resistance.

But that’s not all. 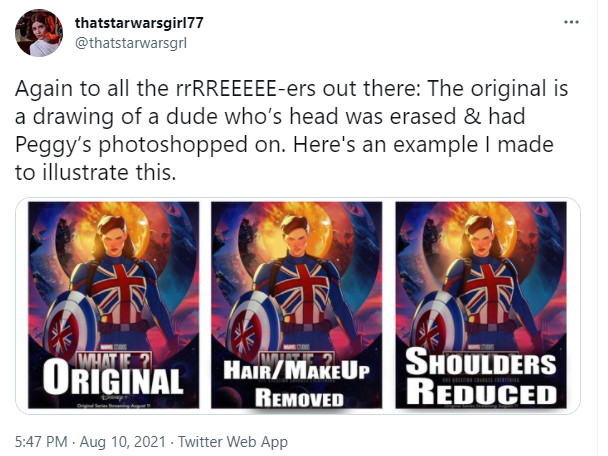 A new animated series called Marvel What If…? is coming out soon. Basically, it’s reimagining Marvel movie and TV canon in new and hopefully creative ways. Marvel ran a comic book series based on that premise in the 1970s.

Except, just like the LGBTQ revamp of established heroes, this move has also come under rather unflattering scrutiny.

I couldn’t find an article commenting on this, but I did find stuff on twitter. It’s kind of the same old argument I sometimes find that in order for entertainment creators to create a “strong female character” they do so by making her more “manish,” as if being male is the only version of “superhero strong.”

Naturally, there were a lot of online debates, some very passionate, about, in this case, Marvel not being able to make Peggy a “super soldier” without basically pasting her head onto a male body. Take another look at the image above that I captured from twitter.

I know, Marvel is trying to get away from the historic sexualization of female characters (just look how Wonder Woman evolved from the 1940s to more recently).

Like I said, entertainment platforms are a product of their times.

I also went back to M.A. Sieghart’s twitter account (no, she wasn’t the one who blocked me, Gwenda Bond was). In addition to her pinned tweet, I found that she posted a link to an opinion piece from the New York Times called What We Are Not Teaching Boys About Being Human (you’ll be prompted to sign in or create a free profile) by Ruth Whippman. 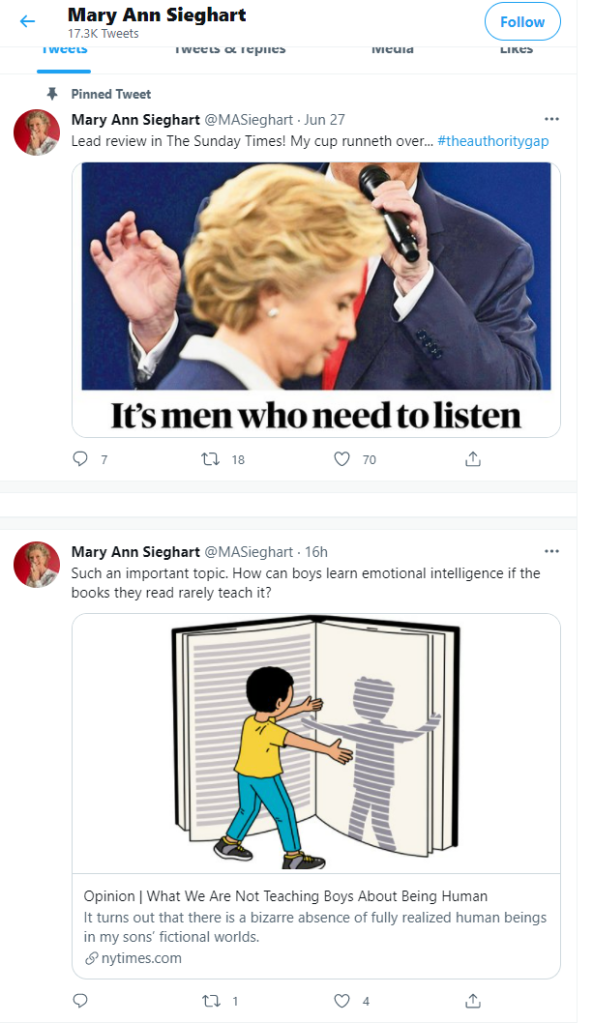 It’s basically a refrain from Sieghart’s article about how boys and men are rendered incomplete by not consuming feminist literature.

This connects back to the “Bounding” article as well as the “What If?” material in the sense that comic books are one great way of getting boys to read. However, inserting social justice and/or feminist material in a (let’s face it) historically male youth entertainment venue got the same sort of pushback as I saw with Sieghart’s article.

It’s got some supporters as well, and social media not being a scientifically controlled survey, I can’t say if more people agree or disagree with these modern changes. However, Whippman’s lament is that boys seem to grow up being less relationally oriented and more “action” oriented, because they are so unlikely to read the “right” material.

Hence the push to find any way of getting young boys interested in various topics in order to mold their development, at least by this subset of authors and other “experts.”

But as I’ve pointed out, it’s not that easy to get boys and men interested. Is it due to a societal influence or is it more a matter of testosterone or some combination? Who knows?

There’s a limit to all this that’s created by the fact that companies want to make a profit and to avoid “go woke, go broke.” There needs to be a balance of sorts and especially the motion picture industry which is practically allergic to taking risks (I guess comic books have everything sewn up in this area). Plus they have to produce something that will appeal to an international market, especially China, to maximize their return.

Sieghart is selling a book and I’m sure she’d like to make a fair amount of money off of it, but to be fair, I don’t doubt she’s also passionate about her topic of trying to get men to listen.

However, the way I see it, the people, uh…men who are buying her book are most likely already convinced of her points and will wholeheartedly agree, while the ones who aren’t will be unlikely to buy and read her tome. I know I won’t.

Why? Because, although in theory it’s written for men like me, in reality, it’s not.

One of the blurbs on her book at Amazon says:

‘A brilliant manifesto explaining why women are still so underestimated and overlooked in today’s world, but how we can also be hopeful for change’ – Philippa Perry

She’s probably got a point, but her point seems more about changing the perspectives of men, not just to help them/us value women, but because we poor saps can’t figure out how to become fully realized people without Sieghart and other feminists showing us the way.

Yes, superhero comic books, TV shows, and movies are a good way to reach boys and men because we’re into that whole thing. With kids, what’s being communicated, whether about Tim Drake (Robin) coming out as bi or Peggy Carter having a male linebacker’s shoulders to communicate power, if that’s all they know, they’ll internalize those lessons, or at least some will.

But there are plenty of us older guys out there who are still saying, “create a product I’m interested in and I’ll spend money on it.” When these creators manufacture tales we don’t care about, we’ll never sample them (no matter how much someone says that it’s good for us). And especially when writers retcon characters who we’ve followed for years or decades, it’s really going to be obvious what the creators are up to. 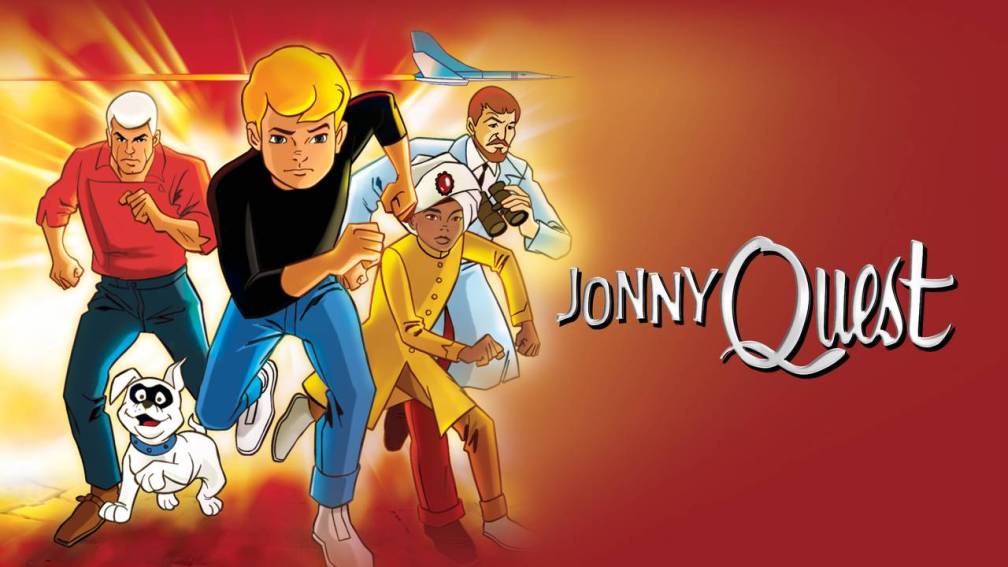 Although I’m obviously aware of current comic book trends, I don’t read brand new titles anymore and haven’t since the early 2000s. Oh, occasionally, I’ll break a few of them out of my collection to read, but they were all published sometime between the 1960s and the 1980s. The “then vs now” sort of it is the difference between watching the original Star Trek and Lower Decks (which I’ve also never seen but one of my sons watches it and gave me a pretty good idea of what it’s about). I’ll read, listen to, and watch what appeals to me and pass some of that along to my grandchildren if I can (my six-year-old granddaughter still sometimes asks to watch my DVD set of the 1964 animated Jonny Quest. I’ve also got her hooked on Space Ghost).

Now I hope that by the time I get this published, I can set aside anxiety and insomnia and fall asleep. End of rant.

16 thoughts on “Not the Comic Books I Grew Up With”