Cover art for the novel Autonomous by Annalee Newitz

With the public libraries closed and my book budget slashed to zero, I was worried I’d be hard strapped for reading material. Then I remembered that some weeks ago, I downloaded a free copy of Annalee Newitz’s science fiction novel Autonomous from Tor.com. So I revisited my kindle device and started consuming the book.

I’m about 60% through, and I can pretty much guarantee that Ms. Newitz is not going to like my review on Amazon. That said, I don’t actually regret reading her book (since it was free), but it again brings to mind how some forms of entertainment are well thought of (in certain prominent circles) and yet cannot seem to tell a good story.

Yesterday, I discovered John Scalzi’s Redshirts novel was also available as a free Tor download, so the MOBI file is now resting comfortably on my kindle. It won both the 2013 Hugo and Lotus awards for best science fiction novel, but given my current experience with “Autonomous,” as well as how I found N.K. Jemisin’s award winning book The Fifth Season, awards don’t always mean what you want them to mean.

END_OF_DOCUMENT_TOKEN_TO_BE_REPLACED

Cover art for the anthology, “The Best Alternate History Stories of the 20th Century

Note that I’ve previously reviewed individual stories presented in this anthology, such as Brad Linaweaver’s novella Moon of Ice, Kim Stanley Robinson’s The Lucky Strike, and Susan Shwartz’s Suppose They Gave a Peace. This review applies to the entire book.

The Best Alternate History Stories of the 20th Century is a 2002 anthology edited by Harry Turtledove with Martin H. Greenberg. As the title suggests, it’s an eclectic collection of short stories and novellas crafted by various science fiction luminaries over a span of nearly fifty years.

As with all anthologies, it is pretty uneven.

Ward Moore’s “Bring the Jubilee” was the toughest to slog through. It’s depressing and seems to be overly long, including details that may not have been necessary to tell the core story. Also, it’s hard to believe that the Confederate Army could have won the Civil War based on a single engagement, one that our hero managed to change by sheer ineptitude.

Both “The Lucky Strike” by Kim Stanley Robinson and “Suppose They Gave a Peace” by Susan Shwartz were anti-war stories, the former being Robinson’s wish fulfillment of a world with no nuclear weapons, and the latter, an alternate history that bore little difference from the actual one, as told through the eyes of one family.

END_OF_DOCUMENT_TOKEN_TO_BE_REPLACED

Yes, it’s here and I offer photographic proof. I received the book in several digital formats and installed “Unravel” via email this morning. I did get a strange email from Amazon asking me if I wanted to do this and giving my 48 hours to respond. That’s never happened before. Of course, I approved it and BAM! I have another book.

END_OF_DOCUMENT_TOKEN_TO_BE_REPLACED

After Dan Simmons lambasted teenage climate change darling Greta Thunberg on twitter, and came on the radar of Mike Glyer’s File 770 (which must still be experiencing technical difficulties, since I haven’t received any email notifications of new posts in quite a while), AND finding out that his signature novel Hyperion is a Hugo Award winner, I’ve been dying to read the book and learn more about him.

Yes, I think he went too far in his insults of a little teenage girl who is clearly being manipulated by adults, but he also stood up to the more leftist powers that be in social media and the science fiction creators and fandom community, and occasionally, they need to be stood up to. So I put a hold on it at my local public library and today it became available.

END_OF_DOCUMENT_TOKEN_TO_BE_REPLACED 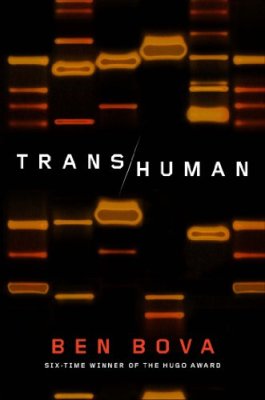 I know I’ve read one or more science fiction novels written by Ben Bova before, but I can’t recall which one(s). However, the cover of Transhuman, published in 2014, boasts of him being a six-time hugo award winner, so this should be a pretty good novel, right?

Turns out, all six of those awards were for Best Professional Editor when he was working at Analog, not for any of his written works, although he is certainly a prolific author.

I was interested in this tale because it involves a grandpa and his little granddaughter. Being a grandparent myself, I know I’d do anything to protect them, which is exactly what 74-year-old Luke Abramson does for his eight-year-old granddaughter Angie.

You see, Angie’s dying of an inoperable cancerous brain tumor. She’s got six months or less to live. But Luke is a cellular biologist and believes a new technique he’s developed can cure Angie’s cancer.