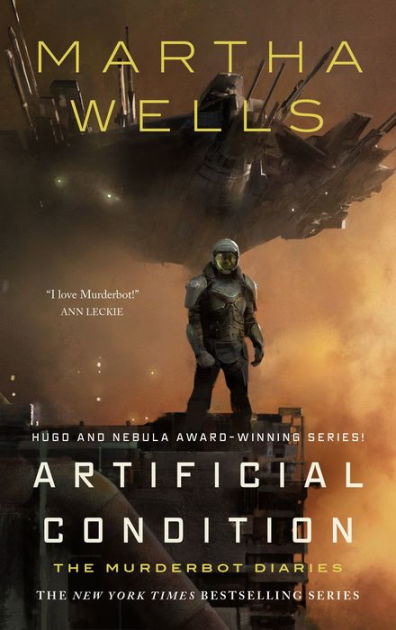 Cover art for “Artificial Condition,” part 2 in the Murderbot Diaries

I was just as delighted in reading Martha Wells’ Artificial Condition, the second part of her “Murderbot Diaries” series, as I was with part one, All Systems Red.

“Artificial” picks up where the previous story leaves off with the “murderbot” on the run, so to speak, after being released by her human clients. Murderbots are considered property, so any independent “unit” is considered a “rogue.”

Murderbots are essentially cyborgs, but controlled by an internal governor, so they have no choice but to obey orders. That said, they do have their own thoughts, will, and preferences (usually not preferring a lot of human contact), but they can’t say “no.”

Except this one has a damaged governor, basically allowing it to operate independently. Having been implicated in a massacre but having no memory of it, the murderbot sets out on a journey of discovery to see if it is really a monster or not.

Actually, I think of the murderbot as “she” and hear her narration in a female voice. Maybe it’s because the author is female. I don’t know.

She hitches a ride on a transport that is usually a research vessel for a university. Turns out the AI pilot is as sapient as the murderbot and a lot more powerful. ART, as the murderbot calls the ship, becomes her ally both in saving the bot from danger and in negotiating relationships with human beings.

Taking the name “Eden” (gender indeterminate), the murderbot poses as an augmented human security expert and is hired by a group of workers who say they were defrauded by their former employer. She needs this disguise to get close to a site on the planet where the now covered up massacre happened.

In trying to protect her clients from being murdered and from their own stupidity, she learns more about humans and her own existence.

This is one of the few science fiction series that lives up to its own hype. Most of the ‘popular” novels I read are more or less dreck, selling a political and social world view at the cost of good storytelling.

While there is a bit of that in the “Diaries” I’ve read so far, it’s not oppressive, and Wells is a good storyteller.

I mentioned in my previous review that the author and/or publisher decided to carve a novel-length story into several shorter works, then charge novel-level prices for each novelette. In reading the Amazon reviews for “Condition,” a lot of readers are pissed, and it’s “dirty pool” on Wells’ and Tor’s part.

Disclosure: I downloaded the first four books for free from Tor. They do that to promote a soon-to-be-published sequel. That’s two down and two to go. So far there are six published stories. After number four, I have to decide if I want to pay outrageous prices just to see what happens next. I wonder if they are available through the public library system?

Just did a search. Some of them are. Maybe I’ll get lucky.

The price point aside, these are excellent stories and I do recommend them. Just find a way to avoid paying full price. It’s good material, but the cost is a ripoff.