When I saw the image being promoted on Facebook by Eleanor Merry, I had to check it out, and it’s true. “Dark Valentine Holiday Horror Collection” is a #1 New Release in Horror Anthologies (as of this writing). That’s pretty amazing, but then again, Valentine’s Day was just last Friday, and no doubt horror fans in love would have thought this was a pretty cool present (as opposed to flowers and candy).

Scrolling down, I saw that it was rated:

END_OF_DOCUMENT_TOKEN_TO_BE_REPLACED

As you know if you’re a regular reader, three of my stories were accepted in the Dark Valentine Holiday Horror Collection: A Flash Fiction Anthology. What you don’t know is that it’s available for pre-order right now, with auto-delivery to your kindle device on February 1, 2020.

The link above is universal to Amazon, but here’s more:

END_OF_DOCUMENT_TOKEN_TO_BE_REPLACED 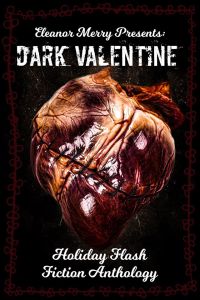 Thank you for your submission to the Dark Valentines Flash Fiction Horror Collection. These are the perfect amount of dark and depraved and we loved your entries. We are pleased to let you know that your story(s) Reaper, Playtime and New Heart have been accepted. Congratulations on your acceptance!

Remember Dark X-Mas? The same publisher is producing something called Dark Valentine. They accept up to five stories between 100 and 500 words long. I submitted stories called, “Reaper” and “Playtime,” which previously appeared on this blog in different forms, and a completely original story called “New Heart.” All three were just accepted.

END_OF_DOCUMENT_TOKEN_TO_BE_REPLACED

“It’s so pretty, Daddy. I’ve never seen so much snow before.” Anna had just turned ten and although she’d lived in Colorado all her life, she’d never seen snow because she’d always been blind.

“Do I have to go to school tomorrow?”

“Not enough to call it a snow day. Besides, you’ll get to see all of your friends.”

Attorney Tim Bishop called his client and refused the case. He wasn’t about to file a malpractice suit against the doctor who gave his Anna her sight.

I wrote this for the Rochelle Wisoff-Fields writing challenge. The idea is to take the image above and use it as the prompt for creating a piece of flash fiction no more than 100 words long. My word count is 100.

I felt this being Valentine’s Day, I should somehow work that into my story. I looked up the Wikipedia page and discovered:

Martyrdom stories associated with various Valentines connected to February 14 are presented in martyrologies, including a written account of Saint Valentine of Rome’s imprisonment for performing weddings for soldiers, who were forbidden to marry, and for ministering to Christians persecuted under the Roman Empire. According to legend, during his imprisonment Saint Valentine restored sight to the blind daughter of his judge, and before his execution he wrote her a letter signed “Your Valentine” as a farewell.

I very, very loosely based my story on that legend (no one gets executed) trying to communicate warmth, gratitude, and a human heart.