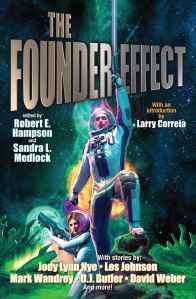 Cover art for “The Founder Effect”

After the whole Baen Books or rather Baen’s Bar kerfuffle and being “shamed” into silence by various groups and individuals (including garnering the disapproval of Paul Weimer who I actually kind of like), the one thing I decided to do when I gave up everything else, was to read more Baen Books.

I probably have over the years, but unlike modern “fandom,” I’ve never paid much attention to who published what book as long as I enjoyed the reading (or even if I didn’t).

I can say that I do remember consuming Cobra (1984) by Hugo Award winning author Timothy Zahn. I don’t know how many others I’ve read over the years, but my current review is an effort to pay more attention to that sort of thing. After all, for whatever “crimes” individuals on Baen’s Bar may be guilty of, to the best of my understanding, the worst we can hang on Baen Books in general and editor Toni Weisskopf in specific is that she neglected to police her forum. I’ve seen discussion groups violently crash and burn over the years for this exact reason.

END_OF_DOCUMENT_TOKEN_TO_BE_REPLACED 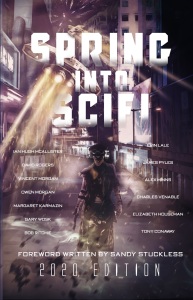 As promised the Cloaked Press science fiction anthology Spring Into SciFi: 2020 Edition is now available for purchase on Amazon. As I’ve been mentioning (a lot) lately, it contains my short story The Colonists which was recently reviewed.

I know these are difficult times, when fact and real life seems stranger than fiction. Believe me, I’ve been toying with the idea of writing any number of stories that address life under COVID-19. I actually did write and submit two (so far) that directly address the “lockdown” and a population held hostage by a virus.

We all want this to go away quickly, but must be prepared to hang in there for the long haul. Anxiety is high as is uncertainty, and we all need do to things that make us feel even a little bit normal.

END_OF_DOCUMENT_TOKEN_TO_BE_REPLACED

Spring Into SciFi: 2020 Edition just got its first review, but not on Amazon. Cheyanne A. Lepka reviewed the anthology on her personal blog five days ago (as I write this), giving it a four out of five star (which is pretty good).

The review calls out four of the contributing authors: Gary Wosk, Charles Venable, Elizabeth Houseman, and James Pyles (me).

She also included links to all the author bios on the “Cloaked Press” website. Here’s what mine looks like.

END_OF_DOCUMENT_TOKEN_TO_BE_REPLACED

I just found out that not only is the Cloaked Press anthology “Spring Into SciFi 2020” available on Amazon for pre-order, but it will be delivered to your kindle device on April 3, 2020. That’s this coming Friday, folks.

The book features my science fiction short story “The Colonists,” which I’m absolutely thrilled about. This is a concept and a universe I’ve wanted to get out to readers for quite some time now, and I’m hoping SciFi fans will really enjoy it.

Previously, I mentioned that I would make free advanced digital (epub or MOBI) copies of the anthology available to anyone who requested one, as long as they agreed to write an Amazon review. So far, I’ve had no takers (which is surprising because, hey, free book).

The offer still stands. Contact me if you are interested. I’m extending the offer for another week, until Sunday, April 5, 2020 (which also happens to be First Contact Day), two days after the book becomes available for direct sale.

Here’s an excerpt I haven’t put online before:

END_OF_DOCUMENT_TOKEN_TO_BE_REPLACED

Just got the email update from Cloaked Press that the digital copy of “Spring Into SciFi 2020” is available for pre-order now at Amazon. The ebook will be downloaded to your kindle device on April 3, 2020.

My science fiction short story “The Colonists” appears within its pages, and I’m incredibly thrilled.

Now for an offer:

END_OF_DOCUMENT_TOKEN_TO_BE_REPLACED 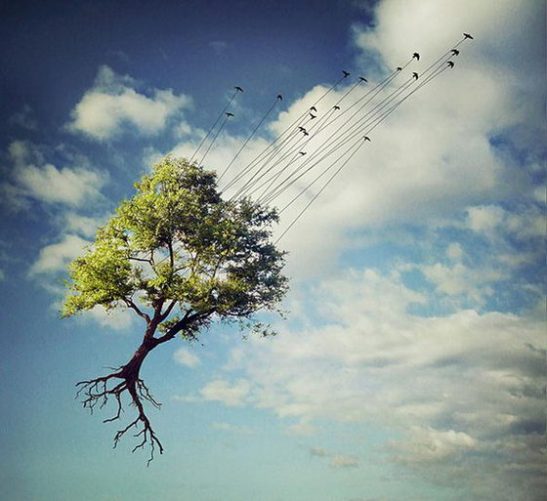 Sonia watched the last of the trees lift up and fly away. It had been her fantasy ever since she was five and first heard that Mars hadn’t always been able to support life.

She had joined the junior Arbor Society when she was eight, became a regional counselor at twenty, and now at thirty-five, she was the assistant manager for the entire Martian Forestation project.

In her right hand was her husband Andrew’s left, while on her other side, five-year-old Billy, and his nine-year-old sister Charlotte were huddled against her.

END_OF_DOCUMENT_TOKEN_TO_BE_REPLACED 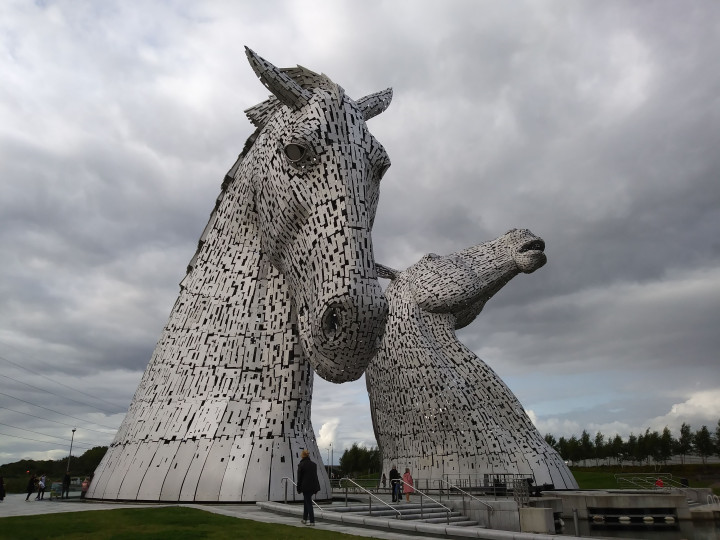 It’s a tourist attraction now, but they still tell the stories, all ending with the heroic victory over a powerful enemy, perpetually frozen in their equine warrior form. But humans were the invaders, twelve colony ships, master guidance control damaged. AI was smart enough to detect the problem but not repair it, so it found an alternate world.

Unfortunately, it belonged to the Aulegren.

The colonists, being human, “discovered” the land, pretended to adapt, then multiplied like rabbits, taking over every natural resource.

The Aulegren first came as fair lasses and handsome paramours, hoping to use love to found peace.

When humans started raping them and taking what they wanted anyway, Aulegren declared war.

They might have won, but they always restricted their population, living harmoniously with the environment. Humans bred and bred, and with both superior technology, and stolen Aulegren magicks (some humans were gifted with the sight), the colonists won. That’s the official story, anyway.

A few were born of Human-Aulegren pairings and we have to stay hidden, lest we ire the pure bloods. Perhaps someday there’ll be enough of us, but to what end? Live in anxious peace with the conquerors, or begin the war anew?

I wrote this for the Sunday Photo Fiction Challenge of November 11, 2018 hosted by Susan. The idea is to use the image above as the prompt for crafting a piece of flash fiction no more than 200 words long. My word count is 199.

A quick Google image search led me to this site and the legend of the Kelpie, shape-shifting water spirits who can appear as beautiful women.

I adapted the story to weave my own little tale of conquest and subjucation, with a hint of hope at the end.

Kara Cooper sat on the sand watching the afternoon sun. She came to California to say good-bye. Divorced, no children, parents dead, she had nothing to keep here anymore. Her brother’s family wanted nothing to do with her, her sexual orientation, gender identity, and politics.

She’s spent most of her life hopping around from place to place, but California was home, or it used to be. Weeping, she remembered her childhood, but that was before the revolution. Strictly speaking, being straight and conservative wasn’t illegal, but it was difficult to get a job or housing, unless the employer or landlord was sympathizer.

“Enough. I’m not going to wallow in self-pity anymore. Screw them. Let them turn the planet into a cesspool.”

She stood defiantly, took one last look at the ocean she’d loved as a child, turned around, and headed back toward the parking lot. She felt the ticket in her pocket. In a week, she’d enter the Vandenberg Spaceport for the first and last time. The shuttle would take her up to where the “Windrider” was parked in orbit. Then, with nearly 500 other colonists, she’d begin the interstellar journey to a new life on the frontier planet “Outlaw.”

I wrote this for Week 30 of the Flash Fiction for the Purposeful Practitioner photo challenge. The idea is to use the image above as a prompt to craft a piece of flash fiction no more than 200 words long. My word count is 199.

Once again, I decided to wage a liberal, progressive revolution in the first world nations, so that political and social conservatives became the marginalized population. I know a lot of people on the left side of the aisle either don’t believe this could ever happen, or if the do, believe that it would be a good thing. However, as I’ve stated previously, ANY ideology that forces its beliefs and practices on unwilling people becomes a totalitarian regime (and I suppose a lot of people feel like that’s what they’re living in right now in the U.S.).

Fortunately for Kara, there’s another option, and it’s on a frontier planet where free, independent, and pioneering people can forge a new life and make it anything they want.

To read other stories based on the prompt, visit InLinkz.com. Oh, and I’m happy to see this linkup has finally gotten some traction. Good work, Roger. 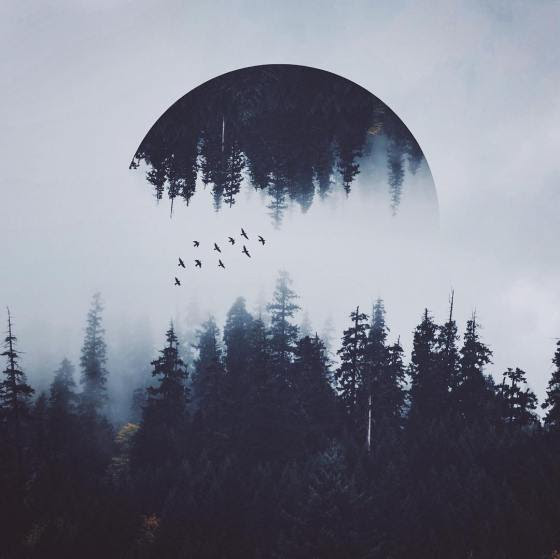 Tristan Schaefer wasn’t sure if this was magic or just the drugs kicking in. Vixia’s single moon Tatis always seemed unusually large in the sky when it was full, especially compared to Earth’s, but now it was impossibly reflective, as if the forest were perfectly mirrored and inverted on its surface.

“Izola!” Where was she? His wife had been with him just a second ago, but she had vanished and so had their campsite.

The Ambia Country spiritual excursion was supposed to be the highlight of their tour of the colony planet. Only one person out of two who entered the park were allowed to inhale the Mist to seek out the Way, the conduit to the spirit realm. Izola was supposed to keep him rooted in the physical plane so he wouldn’t lose himself in the vision. She promised she would be with him every second, but it couldn’t have been more than fifteen minutes since he first inhaled the psychedelic they’d purchased with their tickets at the park entrance . Where could she have gone?

He’d been staring at a flight of birds crossing the gray and black moon and hadn’t noticed the man approach. He was an Indigenous. No one knew what they called themselves, and the colonists had to call them something.

END_OF_DOCUMENT_TOKEN_TO_BE_REPLACED 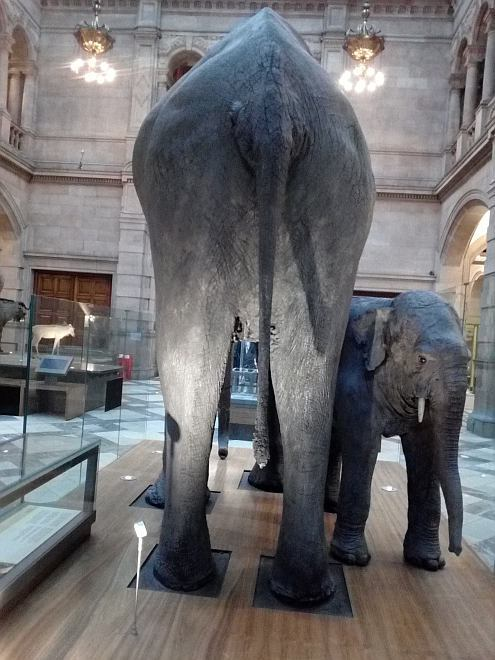 “Which end is the face?”

The class started giggling at Dao’s remark, and Gima laughed so loud that their teacher Mr. Ji scowled at her.

“That’s her tail, but you’re right, it could be her trunk.”

“What are they called again?” Merilyn looked down at the small sign next to the reconstructions. “Elephant. That’s a funny name.”

The twenty six-year-olds were milling about the “mother and child” exhibit. It was their class’s annual field trip, and this year, Mr. Ji had chosen the Mother Planet Museum in the capital city of Colima.

“All of their names will sound strange because we aren’t familiar with them, just like the appearance of these animals seems so odd.”

The excitable redheaded Merilyn circled the “elephants” again and again, trying to imagine what they’d be like if they were alive.

“Do they still exist?”

“It’s difficult to say. They were an endangered species when our colony ship was launched three-hundred years ago, but we can’t communicate with Earth over so many light years.”

Their teacher started guiding the class toward another exhibit, but Merilyn stayed behind, looking into the eyes of the smaller representation. “I hope you made it, elephant.”

I wrote this for the Sunday Photo Fiction Challenge for May 13, 2018. The idea is to use the image above to inspire crafting a piece of flash fiction no more than 200 words long. My word count is 200.

I just finished submitting a nearly 10,000 word science fiction short story for potential publication in an anthology, and part of it included Mr. Ji’s first grade class (in a flashback). Since I have Merilyn and her classmates on my mind, I thought I’d include them in a museum tour on their colony world, trying to learn more about their “mother planet” Earth.