Okay, fine. I’ve made another two TikTok videos. The first is a three-minute whimsical review of Adrian Tchaikovsky’s 2018 science fiction novel Children of Time. My written review of the book is more straightforward and detailed. TikTok videos are brief by design, so I had to compress everything into a max of three minutes. As I wrote my script, I realized there was no way I could deliver anything serious in such a short time period, so I punted and this is the result.

END_OF_DOCUMENT_TOKEN_TO_BE_REPLACED

So I’m trying to expand into different areas of social media to see how they work for book promotion. To that end, I created a TikTok account (yes, I know, it’s for really young people to make short, humorous videos). But Richard Paolinelli has been using it, so I figured I’d give it a try.

I haven’t had the nerve to actually make a video showing my face yet, but I suppose I’ll get there. I really should watch some of Richard’s videos since he’s a geezer like I am.

If you are on either or both of these platforms, feel free to find and follow me.

END_OF_DOCUMENT_TOKEN_TO_BE_REPLACED

I was checking on Facebook this evening and, alas, was inspired to end the work week with a bit of snark. This really is the nature of social media, and especially (but not exclusively) twitter. It’s also the nature of blogging and fandom.

Over the past year and a month or two, my investigation into “science fiction fandom” (as opposed to science fiction) seems to indicate something pretty similar to what you see above. The same as when you comment on twitter, and for that matter, blog in general, Facebook, Instagram, whatever.

END_OF_DOCUMENT_TOKEN_TO_BE_REPLACED

Last March, I lamented how climate change advocates seem to present their arguments, at least on social media, using feels, not facts. Okay, it’s not that black and white of course, but if you listen to extremist advocates such as Freshman House Representative Alexandria Ocasio-Cortez, she says we’ve got exactly twelve years to cut the United States’ (never mind the rest of the world) carbon emissions in half before unending doom and gloom. 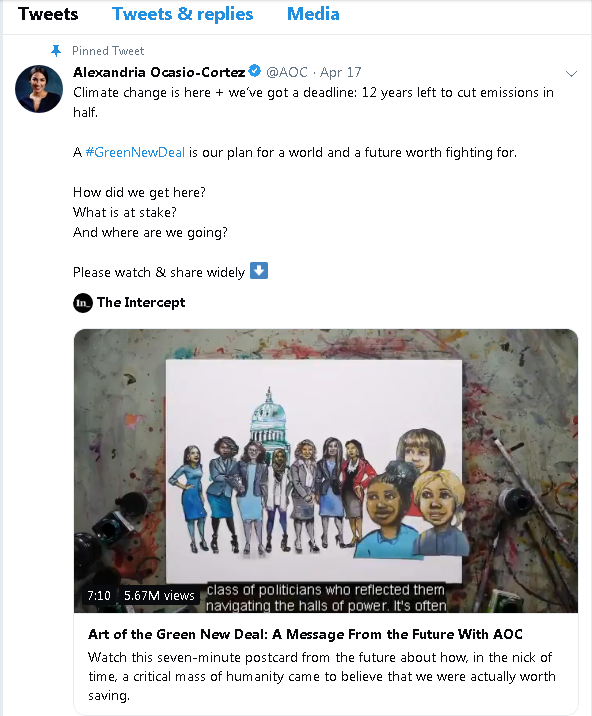 She even produced a seven minute cartoon to “prove” it.

END_OF_DOCUMENT_TOKEN_TO_BE_REPLACED

Repeat to yourself slowly and calmly again and again, even hundreds of times, “I do not need the approval of others,” or, “What others think of me does not make a difference.”

Contemplate these thoughts until you start to internalize them. Repetition will help you integrate them. Realize that you may have repeated many thousands of times the need for approval of others. Counteracting these takes many repetitions.

ME: Especially with the contentiousness going on in social media at the moment (well, really at all times), this is an important message. Celebrities and other pundits don’t have control of your life, thus their opinions about those who disagree with their pronouncements mean less than nothing.

I wasn’t going to write anything “political” today (unless you count my tribute to the victims of the 9/11 terrorist attacks, which I guess could be political, or nationalistic, or some other horrible thing), but this one just popped into my head.

You may or may not recognize the above posted figure of Ron Swanson (played brilliantly by Nick Offerman) from the television series Parks and Recreation (2009-2015). I’ve only watched certain portions of the series, but Offerman’s performance is always one of the highlights.

Swanson is a “dyed-in-the-wool” libertarian, almost (but not quite) to the point of caricature, which allows him to say and do the most outrageous things, get away with it, and be hysterically funny. It also allows him to say certain “truths” that people might otherwise balk at. One excellent example is when Ron explains what government is (and isn’t) good for to a little girl using her lunch (Vimeo video). He’s actually very sweet with her and it’s an endearing transaction (not so much with her mother later on).

However, the point he makes above is the point I’m trying to make. Even leaving Nike and Colin Kaepernick out of it completely, the internet and particularly social media is constantly trying to grab your attention and convince you of this or that (and failing that, accuse you of being evil such that there’s no way to “win” short of surrendering your free speech rights if not your free will).

END_OF_DOCUMENT_TOKEN_TO_BE_REPLACED

“It is impossible to see a fault in someone else if you don’t have it in yourself.” -Anonymous

Apparently, actor Wil Wheaton of Shut up, Wesley fame has made a rather big deal of quitting social media because people were mean to him.

Okay, I get it. People are mean to each other all over twitter, and someone like Wheaton, who arguably played the most unpopular character in STTNG, and who was once compared with Jar Jar Binks on a closed Science Fiction group in Facebook makes a really big target. Actually, I kind of feel sorry for him as on his blog, he said:

END_OF_DOCUMENT_TOKEN_TO_BE_REPLACED

We launched the candles. The tribute was organized by telephone and mail so it was really hard, but we did it.

“Hi. I’m Jill.” She startled me. I’d been listening to other people talk, but I assumed they were already friends, I mean real life friends.

“I’m Dave. Pleased to meet you.” We shook hands and I started to blush. “Sorry. I’m a little nervous.”

“Everyone’s so much nicer than I expected.”

“But now that we destroyed them, there’ll be peace between people.”

I wrote this for the Rochelle Wisoff-Fields flash fiction challenge. The idea is to use the image above as the prompt for crafting a piece of flash fiction no more than 100 words long. My word count is 97.

After yesterday’s “challenging” series of conversations on twitter (which admittedly, I asked for), I decided that the people I briefly sparred with are most likely much nicer human beings in person than they are on twitter. Libertarian commentator and Orthodox Jew Ben Shapiro even admitted that he’s more snarky on twitter than he is in real life. I suppose it’s the nature of the beast, the “beast” being social media, and particularly twitter.

So in my wee fantasy, I killed twitter, Facebook, and the rest of them. Would that bring peace to mankind? Probably not, but it wouldn’t be so easy to insult and slander people we don’t know if they didn’t exist. 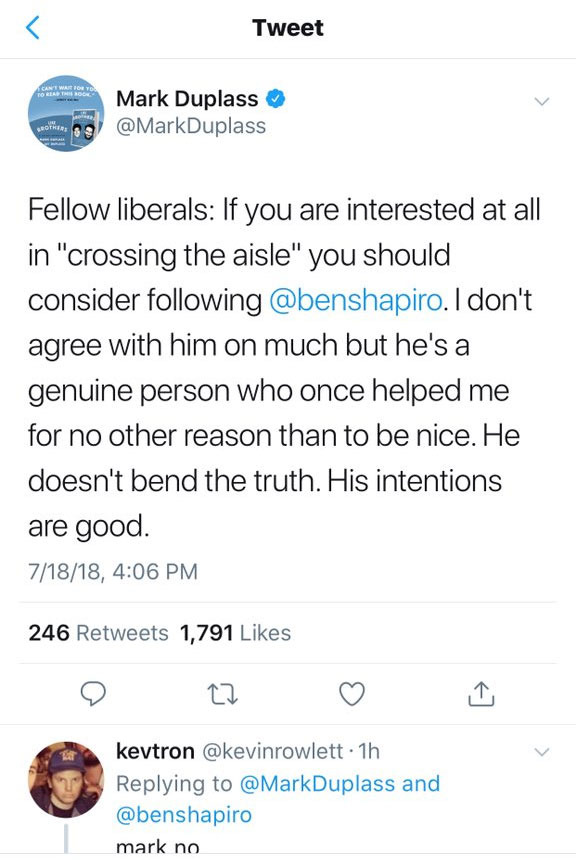 There are days when I lose all hope for humanity. Really, it’s gotten that ridiculous.

First off, actor Mark Duplass said something nice about conservative speaker, attorney, and Orthodox Jew Ben Shapiro on twitter. Then he is immediately caught up in a twitter-storm so severe that the very next day, he formally apologizes.

Then “Guardians of the Galaxy” director James Gunn defends Duplass while at the same time, sliming Shapiro. And then, it’s discovered that Gunn made some pretty horrible tweets back in the day and is subsequently fired by Disney so you won’t see him directing “Guardians 3.”

I suppose Shapiro thought in the aftermath of all this, someone might take a look at his “dumb stuff” tweets, so he posted a list of them, and promised to keep updating it (I haven’t had the time to read that last article yet).

What the heck is going on? Have liberals have decided as a group, that no individual liberal can be friends with or even like a conservative without starting a social media flame war?

Why? How did we enter this twilight zone of dysfunctional communication?

END_OF_DOCUMENT_TOKEN_TO_BE_REPLACED

Warning: This is a commentary, not a piece of fiction. If you came here for the fiction, this brief essay may not be for you.

I’ve been thinking a lot about the Roseanne Barr major twitter gaffe that got her show cancelled, the whole Colin Kaepernick “taking the knee” protests, and how ABC and the NFL have respectively responded to them, all in terms of Free Speech Rights.

First let’s get something out of the way. What’s the short definition of Free Speech Rights? According to Wikipedia, it is:

The First Amendment of the United States Constitution declares, “Congress shall make no law respecting an establishment of religion, or prohibiting the free exercise thereof; or abridging the freedom of speech, or of the press; or the right of the people peaceably to assemble, and to petition the Government for a redress of grievances.

It’s actually a lot more complicated and nuanced than that, but let’s roll with what I’ve just quoted.